Stoic Studios and Versus Evil finally released The Banner Saga 3 for PC, PS4, Xbox One, and Nintendo Switch. The third game now completes the trilogy that got its roots from the early days of Kickstarter. The latest entry in the series completes the saga and wraps up the tale that started back in 2014. For gamers interested in a basic gameplay walkthroug guide, there are some available for your perusal.

Youtuber Santosx07 has a series of videos walking you through the story from start to finish. You can check out his Banner Saga 3 gameplay walkthrough below.

Just like at the start of The Banner Saga 2, if you import your saved game you’ll be able to pick up where you left off. If you sacrificed Rook at the end of the original Banner Saga then you’ll continue the game as Alette. If you sacrificed Alette at the end of the original game, then you’ll continue the journey as Rook. Alternatively, you can choose which one you would rather play if you decide against importing your saved game.

There’s a cool intro cinematic that explains the basic story so far, with Iver narrating. This is where the chapter begins. 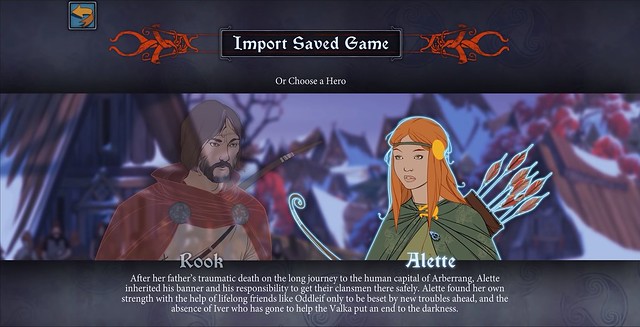 After a discussion with Oddleif at Arberrang, enemies approach the front gate.

You’ll be able to choose six fighters for the first battle. Choose wisely who you will take into battle and how they’ll be positioned.

The battle will involve six peasants. They’ll be stopped by spiked pikes in the ground, which you can actually use to your advantage.

Position your troops around the pike that they destroy, which will allow you to limit the tactical maneuverability of the enemy.

Remember that the battles in The Banner Saga 3 aren’t just about dishing out massive damage, but first whittling down your opponent’s armor, which is the blue bar. When their armor is gone they’ll begin to lose their HP.

Also, don’t forget to withdraw your allies that have low HP and reposition them behind others who have higher armor ratings.

The next battle takes place inside Rugga’s battle camp.

The tent catches fire after a cauldron is tipped over. The fire will spread throughout the battle area, so be sure to move your troops outside of the area of effect of the fire. 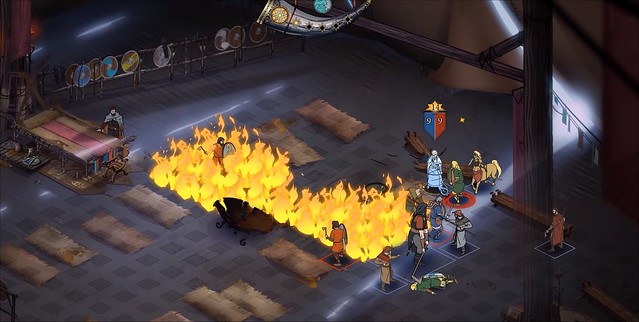 If you can manage to best Rugga’s men, you can capture him and make a mess of his bloodied nose if you please.

You’ll eventually take Rugga captive into the city of Arberrang.

The clan will make their way through the city of Arberrang. Some of the towns folk will want to join your caravan. You can choose to accept them in to increase your fighters and clansmen.

You’ll also have the option to browse some of the traders during the early goings of the journey to acquire some supplies.

If you’ve got the horseborn with you during your venture, some of the townsfolk will become enraged and wish to do battle against them.

You’ll need to choose your battle roster wisely. Also don’t be afraid to equip items to help bolster your efficiency in battle.

The main trick in the battle against the rabble rousers is to target the enemies in blue.

Two of them will be decked out in blue with red and blue shields. The others are peasants that will form up behind the two soldiers.

You can actually lure the soldiers into your troops to kill them quickly by surrounding them and whittling down their armor. If you kill the two men in blue the battle will instantly end.

After the fight you can choose to either part ways with the horseborn or tell Canary you’ll protect her and her kind.

If you choose to depart from the horseborn, Canary will leave the party.

Assassins will attempt to free Rugga. If you choose to intervene and help Petrus you’ll knock him off his feet and fight alongside a few others to fend off the caravan from the assassins.

The assassins consist of two hatchet and shield men, two bowmen, a spearman, and a soldier with a sword and shield.

The assassins are surprisingly weak, and if you focus on taking out each one one at a time you should be able to clear them out rather quickly.

After meeting with King Meinolf you’ll be able to trade and meet with Petrus and Oddleif before heading into the next chapter.

After the situation at Arberrang plays out, the game will switch over to Iver, Juno and Evind, as they attempt to battle back against the darkness of the warp.

This segment of the game has a cool Lovecraftian edge to it, as the not-so-merry band of mercenaries accompany Iver and the warlocks through the heart of darkness in order to undo (or at least stave off) the horrors of the extra-dimensional plague.

As Iver and the others venture to investigate the old castle atop the hill, light barely breaking through the twisted beams that look like a snarled smirk on the once erect structure of wood and stone, they encounter the twisted machinations of the darkness.

This element of the game enables players to take advantage of the Valka spear. Any hero can use it during their turn so long as it’s charged.

You can charge the spear by performing attacks and killing foes.

You’ll need to kill three enemies to fully charge the spear, but you can use the spear even if it only has a single charge.

After picking up two new travelers after the battle, the Ravens mercenary group under Folka come out of Juno’s spell and are willing to fight Juno and Iver. You have the option to respond. If you ask for Juno’s help she’ll attempt to quell the mercenaries and you’ll end up in a survival-fight against the darkness.

This is a wave-based fight, so you’ll fight more than just the basic six enemies from a typical battle. If you’re capable of beating all of the enemies you’ll be able to unlock a special item.

Be warned, though, if you die in between the rounds you will not gain the item and you will either lose certain team members or have to reload the game.

You’ll be able to continue to fight or flee after each wave.

You will be able to replace any fallen comrades between each wave and keep fighting if you wish.

After fighting off the warped clansmen, the group will attempt to make their way through a shortcut when a glimpse of Bolverk is seen in the distance. Before anything can come of o it, though, the game switches back over to the others at Arberrang.