During this year’s GamesCom, TaleWorlds Entertainment decided to showcase the campaign mode for Mount & Blade II: Bannerlord for the very first time, and we get to see the expansive, medieval world brought to life like never before.

Much like Warhorse Studios’ Kingdom Come Deliverance, TaleWorlds is aiming to bring gamers a historically immersive game based around real life cultures and battles.

This is basically a game for those who enjoy fictional history diving into settings and locations that are oftentimes overlooked in bigger budget games. Also given that the game tries to maintain an air of realism, it’s likely not going to appeal to people who prefer games aimed at 13-year-old girls featuring cyborg British women leading the charge on the frontlines during a massive world war.

Anyway, you can check out the trailer below, featuring gameplay from the campaign mode of Mount & Blade II: Bannerlord.

Now there’s a lot to glean from such a small two minute trailer. First of all, we see that the world map has been completely overhauled. Gone is small static map with the little figures on the screen. This time around we see a fully rendered map with real-time dynamic lighting, day and night cycles, and even weather conditions.

For those of you who don’t know, the weather and time of day are extremely important as it will indicate what the conditions will be when you enter into battle.

We see that there are various locations to visit, including those representing Central Europe, as well as what appears to be East Africa.

We see some of the villages on display before getting a look at the equipment screen, where some of the weapons and armor slots are briefly previewed. We see that you can layer your character’s clothing very similar to Kingdom Come: Deliverance.

We also see that the NPCs and AI go about their daily business in ways that help give the game a feeling of having a living, breathing world. 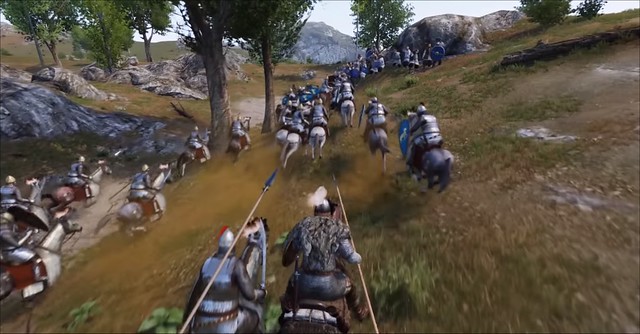 Much like the older Mount & Blade titles you’ll still be able to interact with NPCs and make decisions that will alter the fate of your created character.

The decisions will also determine who joins or who leaves your team, which ultimately affects how your army develops or what sort of leader your character becomes (if at all).

The sandbox nature of the game and open-ended structure of the narrative means that players get to shape and hew the outcome of their journey. This ranges from joining rebellions against tyrannical lords, or becoming a tyrant yourself and ruling with an iron fist. You can also become a raider, waging war against everyone and attempting to conquer the land.

Mount & Blade II: Bannerlord is still a long ways off from release, but the campaign mode appears to be coming along nicely.

You can learn more about the game by visiting the official TaleWorlds website.