Just when I started to think that I had gorged myself to bursting on the first Overcooked since its rather lackluster launch on Nintendo Switch, I now find myself with a hefty dessert in the form of the second installment to contend with. At first glance, it’s hard to tell what’s new – Overcooked 2 retains much of the same game play of the original, with a clear focus on couch cooperative and online multiplayer and relatively slim pickings for the solo player.

First things first, I’ve already mentioned that the first game was rather unimpressive at launch and that is mainly because it was a technical shambles. Whether in handheld or docked modes, the initial release suffered from serious frame rate issues and other problems that would quickly spell doom for would-be chefs, thanks to the high level of precision that the game requires. The good news is, the Switch version of Overcooked 2 seems entirely stable based on my five or six days of frequent play, which is great news, but is probably related to the fact that the sequel shares a very similar (if not identical) base engine to the original. 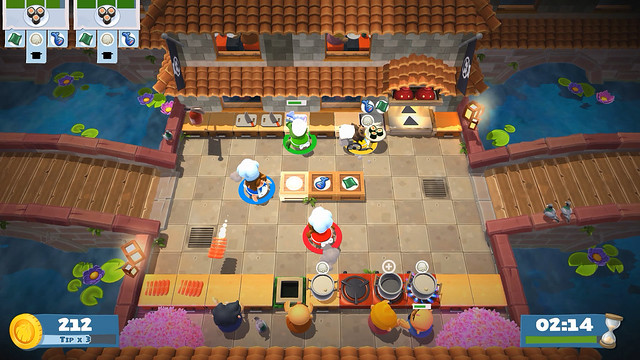 The changes actual mechanic changes are hard to spot at first. There’s no visual overhaul at all, as far as I can see. I can’t spot any new animations or movements as such and from the cut scenes to the world map and certainty into the game itself, the game is visually identical to its predecessor. New players should know that both Overcooked games are played from a top down perspective, with cute visuals that depict up to four on screen chefs – each of these (a minimum of two) will be controlled by one of the players, whilst in solo mode, the lone player controls both by switching between them using shoulder buttons.

What is new is the ability to throw ingredients, which is a powerful ability that works directly to counteract the increased level of physical complexity that some of the later levels introduce. I have to admit that I can’t remember every feature that was present in the first game, but to give you an idea of what I think is new, there are now alien worlds to cook through, levels in which buttons affect the game world when stepped on and levels that actually morph or move midway through, to a much greater extent than the boats or counter tops that moved in the first game. 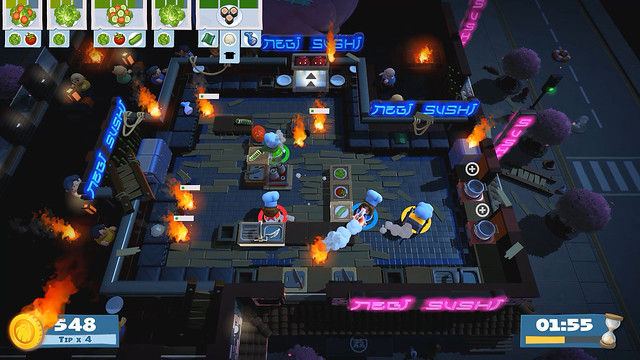 As you would inevitably expect, there are also new and more complex recipes, including those that have more than one stage of preparation, for example combining and cooking two separate sets of base ingredients and then combining them both to create a finished product. Right from the outset, even the basic recipes are different, which (at the very least) means that players will have a few new things to learn before the old muscle memory returns – as the levels become more complex, the added recipe complications only compound matters.

When played multiplayer (particularly with seasoned players) Overcooked 2 at least retains (and probably exceeds) the level of satisfaction that the first game had to offer when played well. Learning what particular challenge each level is going to throw at the players is certainly the main route to success, but even if you can make a plan, having up to four humans execute it properly can be a challenge. As the levels begin to move more and more (which they do) then you’ll need to optimise tasks and chef placement based on what is happening. A single weak link will break the chain, so whilst chaos in Overcooked 2 can be quite funny, it’s likely to frustrate one or more of the players who might actually want to succeed. 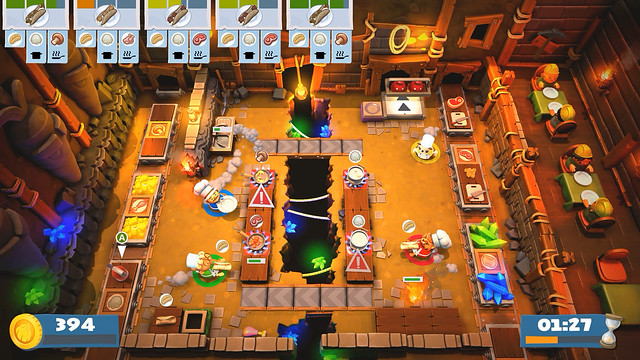 Played solo, Overcooked 2 has much less demanding requirements for scoring, but the game also loses much of its magic. Swapping between chefs on the more complex levels simply adds an element of sluggishness (rather than fun) and I really wish there had been an option to automate or script the other chef in some way. I appreciate that this would lead to frustrations in its own right, but given that Overcooked 2 is more of the same rather than something new, it might even have been fun to add a whole “bot programming” feature that players could tinker with and tweak.

Ultimately, the decision to buy Overcooked 2 or not should be a simple one; if you liked the first one then you’ll like this one, whilst if you hated it then nothing here will change your mind. With that said, I do appreciate that not everyone will have played the first game, so if you’re in that camp you might be undecided. If you have a regular, local group of people that enjoy complex, competitive and challenging cooperative games that have lots of staying power, then you really must buy Overcooked 2. If you are a solo player or your local friends are casually inclined, then you might want to think twice as you’ll struggle to make the most of your purchase. For that reason, I recommend that you: