Combine a sketch shader with flash animations, physics-based monsters, and extra-dimensional creatures designs reminiscent of Eldritch horrors, and what do you get? Source of Madness.

The side-scrolling rogue-like shooter recently had a demo made available for download over on the GameJolt website.

The game is is about the cult of knowledge attempting to open the third gate in order end the madness and close Pandora’s box. Players take on the role of a mysterious figure with the power to defeat the greater beings. These beings, however, are generated and created through a dynamic, procedural machine learning generator. This means you get different kinds of monsters each playthrough with different kinds of behavior.

This is coupled with the randomized worlds, so there’s no real way to learn the monsters or the levels during each playthrough, forcing you to adapt and learn every time you play.

Graphically, the game looks as if it were pulled out of a sketchbook.

It uses an inked outline for the level designs, while the monsters themselves have a more faded, distilled look. There’s a cool sense of ugliness about the beasts that you fight, as they roll, crawl, slither, and climb their way about the stages utilizing physics-based momentum. It really makes the giant, spiked tentacles, and razor claws move and behave in menacing and creepy ways.

For right now the developers are looking for feedback on the designs, gameplay and the mechanics, which is why they released the free demo. 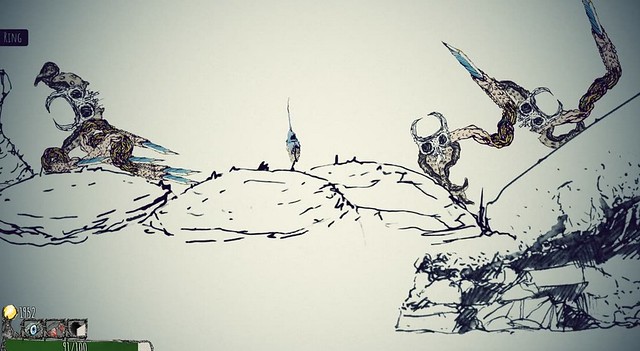 There’s definitely some potential here with Source of Madness. The name is fitting and the premise is intriguing.

I think they really need to hammer down a solid story so people have something to latch onto, and if they can iron out the gameplay and monsters so that there’s better cohesion and uniformity in the way the levels play out, it could be nice little indie game for people who enjoy Lovecraftian rogue-likes.