For a while there Oscar Brittain seemed content with a slice of the World’s Fastest Pizza, banana milkshakes and beaches until such day he decided to step into Indiecade @ E3, 2017.

No clue what happened there, but he recalls it to be electric enough for him to drop out of Architecture school to focus full-time on a bounty-hunting/side-scrolling racing mashup that was the purpose of his E3 visit.

A few months later there happened a very successful Kickstarter and now Desert Child sits on the verge of a Steam, PlayStation 4, Xbox One and Switch release thanks to the Akupara Games label. There is no definite release date for this year although I’ve seen mentions of September.

It’s a rags-to-riches tale that’s equal parts role-playing and racing; the Earth’s dusty, is moving to Mars for good yet you, player, have insufficient funds for the air fare. What you DO have however is a very slick hoverbike offset only by an insatiable craving for pancakes.

That’s where the racing comes in, yes, as you partake at various local events with intent of entering the Solar Championship Cup. But time’s short and the races infrequent enough to warrant other means of revenue, such as hunting bounties, delivering drugs and an assortment of other odd jobs to keep afloat.

Which is why Brittian’s kept each of the game’s cities of Mullahoe, New Olympia and Europa Uno bursting with color, life and NPC’s in an art style that best complements his inability to draw. In these you’ll be engaged in plenty of exploration, interaction and side-questing while continually building your steed. 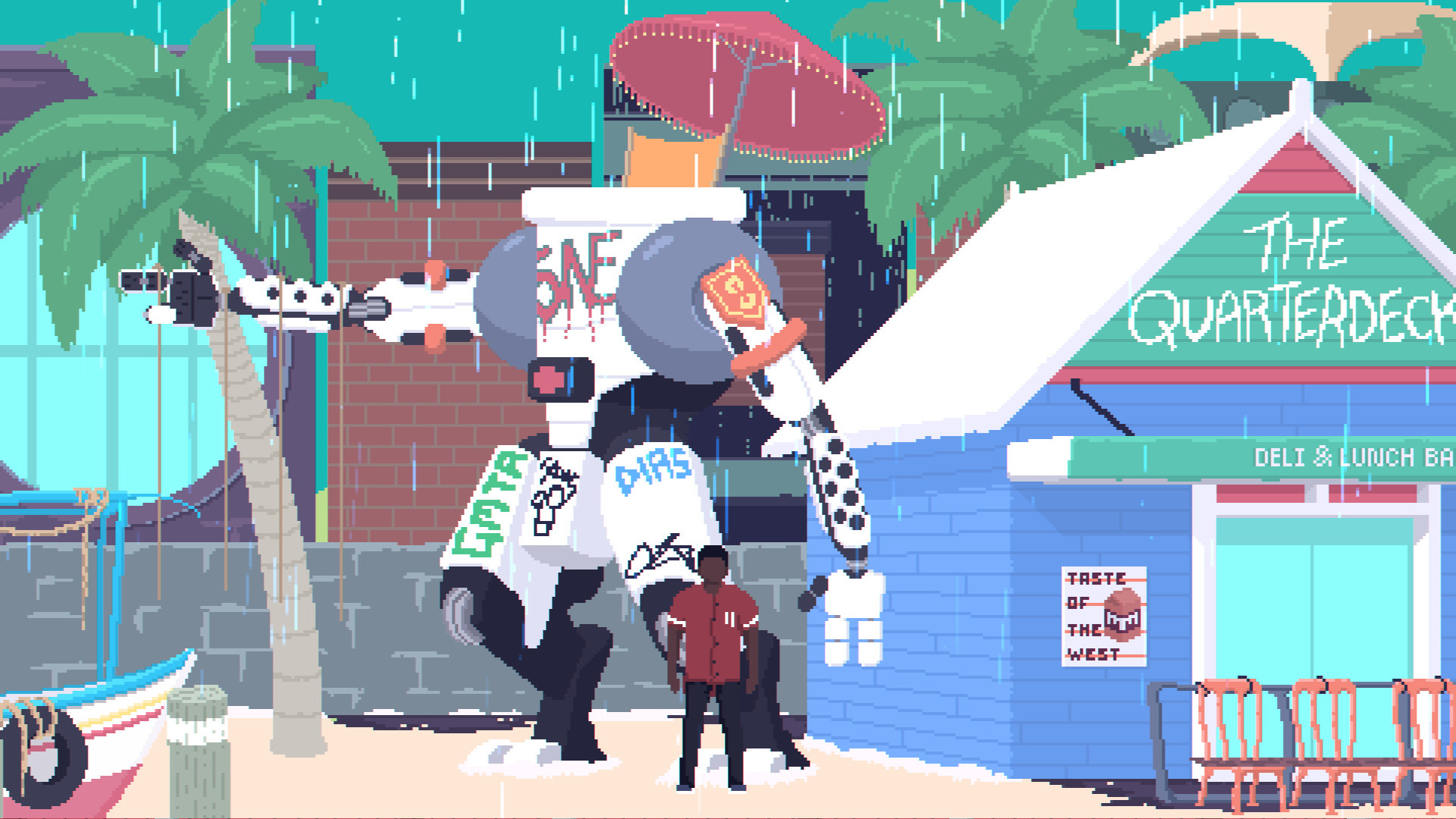 ‘The first thing that happens’, says Brittain, ‘is that your Mechanic teaches you how your bike works under the hood. The internals of the bike are all movable pieces, like items in a Diablo-style inventory screen. You can then buy, win, or earn new parts that you can place onto this grid, and connect up to other parts.’

‘Additionally, you can add power cells to the grid, and then link them to Amplifiers to give them a multiplier. So, take that Gun Amplifier; it lets you increase the size of your bullets by 1X for each power cell linked to it.’ 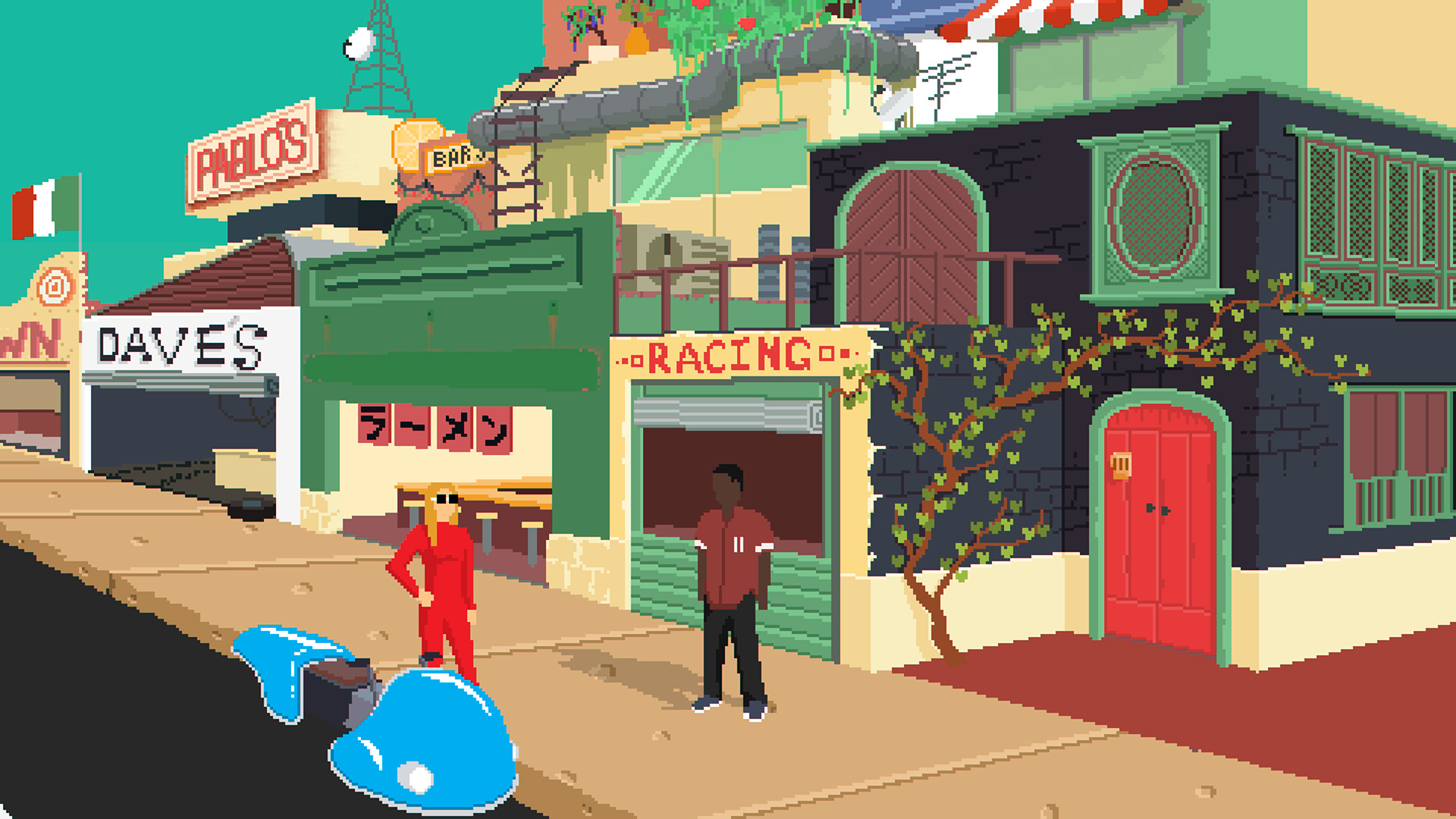 ‘You might say to yourself “Wait, I don’t really need such a large boost fuel tank, I’ll downgrade to a smaller one, so that I can fit more power cells on the grid and link them to my Gun Amplifier”. That’s a basic example, but this system gives you some pretty crazy options.’

These parts will come off the clients you service in between races and mouthfuls of ramen, which will also have to be paid for as you eat to keep fit. A lo-fi hip hop soundtrack meanwhile keeps spirits raised. 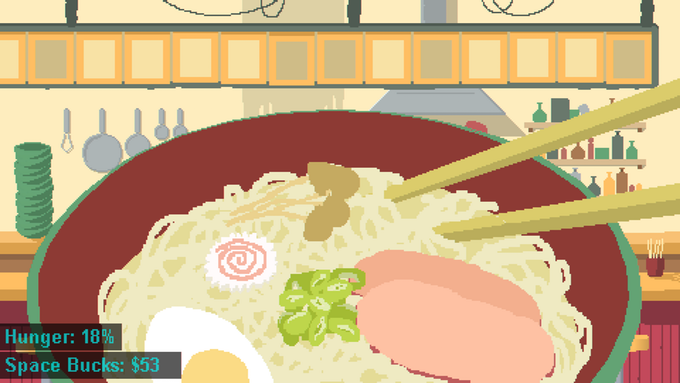 Updates and a demo here.