Whilst everyone else has been doubling down on Fortnite and Dark Souls clones, Rebellion has been quietly beavering away on something else. Something… interesting. Strange Brigade is an odd one. It’s a brand new IP set in the adventurous days of the 1930’s, when the British Empire still existed and zeppelins were considered a reasonable and sensible method of transport. It’s not the kind of twee outing that you might be expecting though; instead, it’s a rip-roaring cooperative shooter that leans heavily on movies like The Mummy for inspiration.

Featuring a lengthy campaign that lasts maybe ten to fourteen hours, Strange Brigade can be played either solo or cooperatively. There’s also a horde mode and a few other ways to play, but there’s no doubt that whatever the mode, Strange Brigade is intended to be enjoyed with friends. The titular Brigade is made up of four rather colorful compatriots who include Frank Fairburne, Archimedes de Quincey, Nalangu Rushida and Gracie Braithwaite. Each brings their own particular style of play, with different basic loadouts, as well as particular strengths and weaknesses that support their preferred approach.

The premise of the story is just as daft as that of the movies that Strange Brigade nods to. Some 4,000 years ago, an evil queen named Seteki ruled Egypt as a tyrant. Her necromantic magic led to her attracting the attention of Wadjet, the Goddess of Justice, who ultimately bound her to some kind of soul prison. Fast forward to the tomb-raiding days of the early twentieth century and, you guessed it, some inconsiderate dickhead accidentally sets her free. Upon receiving a summons from their contact within The Department of Antiquities, the Strange Brigade is scrambled and our story begins

What follows is… Perhaps not as predictable as you might think. Sure, the storyline is more or less as daft as could be expected from such a setup, but the gameplay is actually more cerebral than I could have hoped. Action is undoubtedly Strange Brigade’s forté, but the game also rewards players for not only exploring the many routes through its levels, but also for solving the various puzzles that are scattered about them. Switches, levers, timers – all feature, and whilst nothing is massively taxing, a few of the puzzles are well made to enable replay value.

Tested on an Xbox One X, Strange Brigade is a good looking game, albeit one which shows it off as a double A, rather than a triple A experience. The visuals are rich and detailed, with excellent depth of colour and some great particle, fire and other special effects. Enemies are varied in both their composition and their animation, making swarms of them quite an impressive thing to be chased down by. As with games like Left 4 Dead, Strange Brigade mixes slow, shambling baddies with faster, more dangerous ones to great effect, although the overall tempo is higher, which makes for some fantastic scenes.

The levels, of which there are about ten, are fairly varied considering that there might have been a temptation to use relatively dull, sandy scenes on a more frequent basis. The opening level demonstrates things to come and features canyons, large open spaces, secret passages and grand temples. The game closes out having visited some incredible man made structures, as well as some geological marvels, but it’s finale (in the underworld) is undoubtedly the most impressive thing Strange Brigade has to offer. The final battle with Seteki and her hellish minions is a particular highlight. 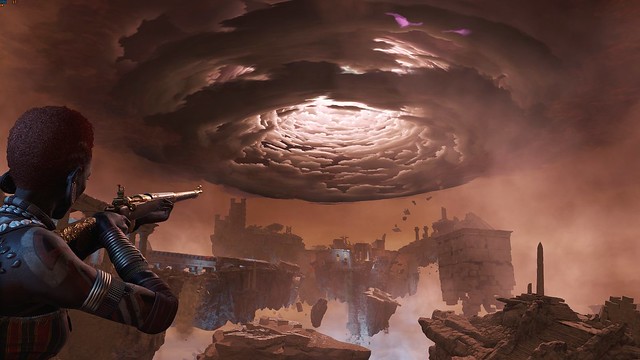 Of course, the most important thing about any game is how well it plays. Strange Brigade is a success in this regard, with the fast pace that I mentioned earlier coming across in the gameplay and the exploration and puzzles combining to add something rather unique. The gunplay is exciting too, with a broad range of powerful shotguns, slow to use rifles and lighter, more rapid fire weapons. You’ll often find yourself backtracking away from enemies and using side weapons like Molotov cocktails to thin the herd before collecting enough energy to unleash one of the Brigades powerful abilities.

Developer Rebellion Developments appears to be keen to deliver ongoing content as well, which I’ve always found to be a necessity for this kind of cooperative game. There is already a raft of paid DLC available, but just as important is the fact that a new character and a new horde level will be made available for free during September. It’s hard to say when this kind of goodwill will cease, but for now the online community seems to be reasonably strong and it’s usually possible to steadily assemble a reliable team of four.

I think Strange Brigade is a rough diamond. It boldly introduces new characters filled with personality, like hard hitting Gracie, or straight talking Nalangu as if they’ve always been part of gaming history. Strange Brigade is completely unashamed about what it attempts to do – update straightforward, classic gaming mechanics like shooting and exploring in a far fetched setting into something new. It looks and sounds good, it works well solo and very well with friends and it delivers a healthy amount of content that ya might find is worth sinking your teeth into.

As a result, you should: