Having now reviewed Football Manager for the past four years running as well as Football Manager Touch for the last three, I have to forgive myself for running out of interesting ways to open these reviews. I’ve already talked about spending thousands of hours on Championship Manager 2 as a teenager and then hundreds and hundreds more though my adulthood. In fact, looking at my Steam library, I can confidently state that I’ve spent about ten percent of my adult life either playing (or talking about) Football Manager.

Regardless of all this history, my flirtations with Football Manager Touch have been relatively fleeting, having never really blossomed into the lifelong affair that I have with the bustier, more attractive PC version. We must look to the future, however, and as I mentioned in my review for Touch 2018, the slimmer version of Football Manager is still far, far more feature rich than I ever thought that the game would ever need to be. The real problem with playing all these different versions is remembering what each one of them does and doesn’t have compared to the last.

Touch 2019 on the Nintendo Switch feels as good and as complete a football management game as I ever thought I would need, except that because I’ve been playing Football Manager 2019 on the PC for the last three weeks solid, my judgement is skewed. Touch 2019 supports running three nations (with multiple leagues in each) and it supports the creation of custom managers and teams. It also features the full 3D match engine that looks surprisingly good and runs as smoothly as you’d ever want it to.

These are the highlight features that the box sells to us, of course, rather than what actually makes up the meat of the game. Last year, if I was critical of anything, it’s that Touch 2018 left out key features of the full game. Features like Squad Dynamics (which I love) for example. Dynamics hasn’t appeared in Touch 2019, sadly, and elements like Staff Management are still very light, but a couple of the key features from the full version of Football Manager 2019 have made it over – the new Training and Tactics sections.

The new Training module allows players to take much finer control of training than they ever have been able to before, with a clear breakdown of the benefits of each kind of training and the effects it can (or will) have on players such as their synergy with each other, the fans (in the case of community outreach) and on particular skills. Training affects the likelihood of injury and the energy levels of players and this is now properly and clearly articulated in a way that it never has been before. Personally, I still don’t focus heavily on training (and I prefer to hire good staff to do so) but in Touch 2019, I found training to be an interesting thing to tinker with whilst sat on the train.

The new Tactics module (which is also in the full game) is far, far better than it was before, especially, I imagine, if you’re new to Football Manager. Creating tactics and really getting the players to do what you want them to do is a key part of the series,  but in older versions it was always hard to know if what you were doing was really having any effect. Touch 2019 features multiple pre-defined tactics, but most importantly it still allows players to define their strategy, their formation, their individual player roles and a whole host of other, very clearly articulated aspects of the game. It also allows these elements to be fine tuned for different phases of the game – such as when possession has been lost, or won. 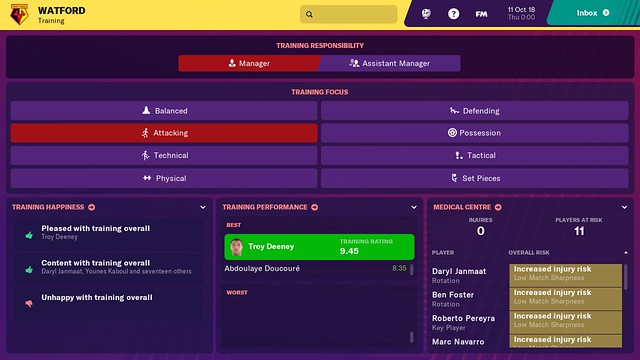 A feature unique to Touch is the ability to simulate or instantly generate the results of a match, rather than watch it through. This, as far as I know, is a brand new feature that has never been present in the mainline series – probably because it isn’t really in keeping with Football Manager‘s deeply immersive style.  In short,  players now have two options to completely skip watching a match by either simulating it using some pre-defined strategic approaches (play for a draw, look for the win, etc) or to have the result generated automatically based on having your assistant take over. The latter is quicker, but not by much. I’ve tested this approach for a whole season and I’d say that it can produce some odd results (a  lot of draws) but in general, it’s a nice way to close out those less important matches when you’re in a rush, or if your Switch is low on battery power.

Whilst I still feel that Touch 2019 lacks some of the more potent aspects of the full game (Team Talks, Dynamics) I can’t argue that it’s anything less than a marvelous achievement. To reiterate what I said last year, I still can’t believe that I’m playing a football management game that is this deep, this broad, has this many players and clubs and this much tactical choice on a handheld console. I wouldn’t have believed it was possible on the most powerful PC ever made, had it been released fifteen years ago. As such, I can hardly complain about the omission of a few elements, especially not when some really meaningful additions have been made this year.