Toei Animation and Netflix’s Saint Seiya: Knights of the Zodiac is already off to a horrible start with original fans. The new streaming show is due out in the summer of 2019 on Netflix, but the producer, Eugene Son, decided he wanted to be “woke” for today’s generation in order to show a strong and empowered woman.

Many fans noticed that Andromeda Shun in the upcoming 3D animated show was swapped from a dude into a girl. The original character was an effeminate green-haired dude with pink armor, green hair, and green pants. His ability was to utilize chains both as offensive and defensive measures.

In the upcoming show Andromeda is now a girl, and this resulted in the YouTube trailer being downvoted by a third of the viewers.

A lot of fans were curious why they decided to gender-swap the character? Well, it turns out it’s because the producer felt there were too many males in the Bronze Knights.

Eugene Son was pelted with questions about the change on Twitter, and like most artists who consider themselves “woke”, he decided to launch into a lengthy Twitter thread about the change on December 9th, 2018, explaining the reasons behind the gender-swap…

“The big question: “Why change Andromeda?”

“When we started developing this new updated series, we wanted to change very little. The core concepts of Saint Seiya that make it beloved are so strong. Most of it holds up well even thirty years later the only thing that concerned me: the Bronze Knights with Pegasus Seiya are all dudes.

“Now the series has always had fantastic strong dynamic female characters, and it reflects in the tremendous number of women who are passionate about the Seiya manga and anime, but thirty years ago, a group of guys battling to save the world with no girls around was no big deal. That was the default then.

“Today the world has changed. Guys and girls working side-by-side is the default. We’re USED to seeing it. Right or wrong, the audience could interpret an all-male team as us trying to make a STATEMENT about something and maybe 30 years ago seeing women punching and kicking each other wasn’t a thing. But today? Not the same.

“Okay, so what to do? We gave it a lot of thought”

Son goes on to explain that they decided against creating a new female character and having her join up with the Bronze Knights because they were talented enough to write a female character who couldn’t be shoehorned into the group. That’s not an exaggeration. 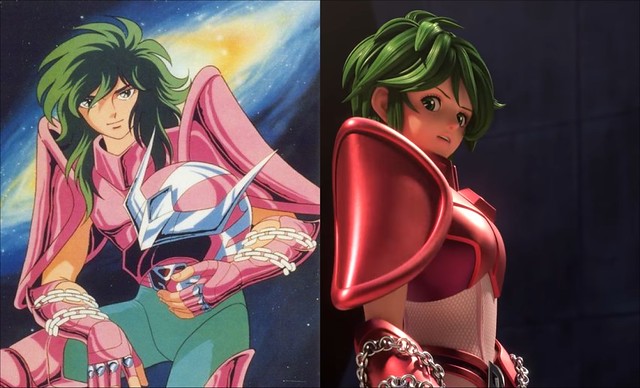 Son literally admits that they didn’t know how to organically write a new female character into the show, so their next best solution was just to gender-swap one of the males, so that’s what they did, with Son saying…

“There are plenty of female characters in the anime and manga. Marin and Shaina are both incredible. But they’re both powerful already – no one wants to see them turned into Bronze Knights. Do we take an existing character like Sienna (formerly named Saori) or Shunrei or Miho, give them powers, and turn them into our April O’Neil?

“Or do we create a new female character and have her join the team?

“But I didn’t want to create a new female character that would stick out and be obvious – especially if she was not created naturally and has no character/personality except ‘to be the girl.’

“Then we discussed Andromeda. Everyone agrees – an AWESOME character.

“The more we developed it, the more we saw the potential. A great character with a great look.”

What’s bizarre, though, is that they could have created a new character who was attached to Shun, who eventually took his place, who was related to him and had to work her butt off to become as good as him. There’s a hundred and one ways to write in a new female character that feels organic and with a believable and engaging character arc, but Son admits that they’re keeping everything the same about Shun except he’s being turned into a girl, writing…

“The core concepts of Andromeda wouldn’t change. She uses her chains to defend herself and her friends – which she learned from her protective brother who taught her how to fight. And hardcore Seiya fans know what happens to Andromeda as the series progresses. What would that look like with a woman Andromeda? I thought it would be interesting to see.

“But I knew this would be controversial. I don’t see it as changing the character. The original Andromeda Shun is still a great character.

“But this is a new interpretation. A different take.

“If you think this is weird and don’t like it, I get it. Even within Toei, there was plenty of “Are you SURE about this?” A lot of hardcore fans of Shun really love Shun. But I hope you’ll be willing to check it out when it’s available and see what you think.

“I know some (many?) of you already hate it. Even in Toei, Andromeda was their favorite character and this feels like a slap in the face.

“So if you hate it (and me) and say “This new series is NOT for me” – no problem. I understand. I appreciate your passion for Seiya.

“When I was a kid, I dug the original Battlestar Galactica. When they changed Starbuck to a woman, I thought it was weird. But I watched and loved the new BSG. A terrific character and a new interpretation. Anyways, that’s what I was thinking when I suggested it. That’s why we did it. And I think the new series will be a lot of fun once we talk about the change to Andromeda.

“Hopefully you’ll check out the series when it comes to Netflix in 2019.

“But again, if you aren’t interested and it’s just a big NOPE, then I totally understand.”

Fans have not been responding to the news in a favorable way, with plenty of fans from the original series angry about this new reinterpretation due out next summer.

However, with Netflix’s history of race-swapping characters and gender-swapping characters, this should almost come as no surprise by now. The Witcher‘s casting has been part of a high-profile fan fallout because some key characters were race-swapped in order to appease the writers’ desire to be more “diverse”, which basically ended up translating into non-white casting.

Combining the less-than-stellar animation work with the whole gender diversity angle that Eugene Son and the others are pushing, don’t be surprised if this new Netflix rendition of Saint Seiya ends up on our Get Woke, Go Broke master list.