Nintendo’s Super Smash Bros. Ultimate is currently available for the Nintendo Switch. The game has been one of Nintendo’s biggest promoted titles of the year and now that it’s available there are tons of walkthroughs popping up, mostly because Nintendo recanted its aggressive and authoritarian content policy for livestreamers and content creators. Nevertheless, if you were looking for a basic walkthrough for Super Smash Bros. Ultimate’s World of Light mode, there are plenty of walkthrough guides available, including one right here.

Youtuber SwitchForce has up the first part of the World of Light, which you can check out below.

After you head into the Spirit Mode, there’s the option to choose Easy, Normal, or Hard.

A cinematic will play as the entire galaxy is engulfed in a world of light, and only Kirby manages to escape. The others are turned into evil versions of themselves courtesy of the villain Galeem.

At the start of the mode you’ll play as Kirby on the World of Light. You’ll learn about how to unlock characters, how to use Spirits and how to fight. 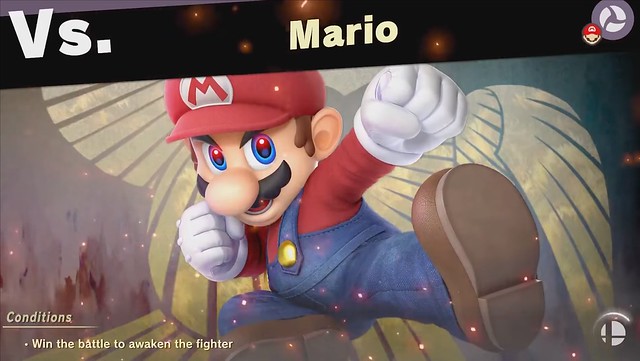 The first person you fight is a puppet Mario. You can also equip different Spirits you acquire, which will grant you special buffs and abilities.

You can go into the Spirits Menu to swap out the different Spirits. As you defeat a Spirit you can equip both primary and support Spirits. The spirits work similar to relics or other buffs in RPGs, where you equip them to gain an advantage during a fight.

You’ll need to fight against Yoshi and Jiggly Puff early on. Once you fight through the nodes you’ll eventually engage in a Fighter Battle.

Fighter Battles are like mini-bosses that you’ll face off against on certain maps where you’ll go one-on-one with the fighter. The first Fighter Battle is against Mario. Once you defeat him you will be able to have Mario added to your stable of fighters. Once you defeat Mario he will join your team and you can select him from the character menu. 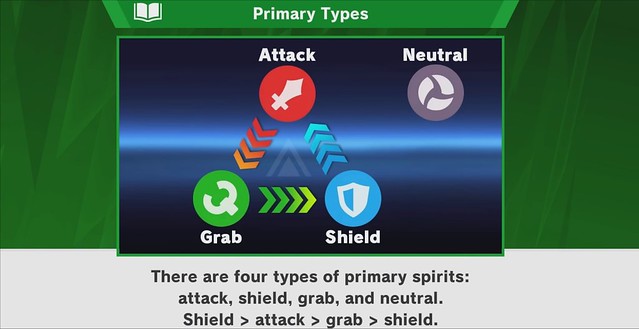 Once you add Mario to your staff you have to fight another sub boss and then you’ll have an option to choose a pathway to unlock one of three charatcers.

Now keep in mind that you won’t be able to go the other paths once you choose a separate path.

You’ll have to make your way around the map to unlock the other characters.

You’ll also be able to level up your characters through the skill tree. The trick to the game is balancing your Spirits and your skills.

This also means that certain enemies will require you to switch out to different Spirits to get an advantage over them during combat.

Additionally, each person you fight during the World of Light will have certain conditions for victory or certain mutators on that will change the way a fight plays out.

There’s a full-on skill tree in the Adventure Skills menu that will allow you to increase your abilities. During a fight against a difficult opponent, you can edit your party by clicking on the “Party” tab, and outfitting your team with the appropriate skills by tapping ‘Y’ on the controller to automatically assign the best kinds of spirits to match your foe. 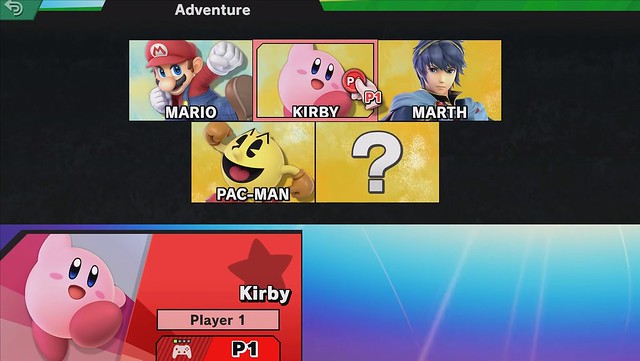 Another thing to keep in mind is that different pathways allow you to unlock different types of characters. If you go the Marth route you’ll also unlock characters like Pac-Man and Olimar.

As you win matches, unlock characters and progress through the World of Light, you’ll eventually fill up the roster.

ZackScottGames also has a walkthrough available that takes a completely alternate route for the Villager from Animal Crossing.

The Villager route in the Adventure Mode will take you toward the kart racing track where you’ll fight against the Octolings and unlock the kids from Splatoon 2.

Unfortunately Zack doesn’t stick with the story mode for long and ends up getting bored and moving back to the classic mode.

Thankfully, YouTubers like RabidRetrospectGames features the entire World of Light mode in a single video, which stretches for 12 hours. Yes, the Adventure Mode is 12 hours long. You can check out the video below.

The video covers all of the game’s base fights, the boss fights, the character unlocks, as well the true ending for Super Smash Bros. Ultimate.