It’s almost impossible to begin a review of This War of Mine without making reference to the awful circumstances which led to its existence. The fact that in every war (but especially modern guerrilla war) the cost is often paid in the misery and suffering of civilians, to an even greater extent than the military forces that fight it. This War of Mine is inspired specifically by the Siege of Sarajevo, which, whilst only as grim as any other similar conflict, has close personal linkage to the development team.

Since the Switch version that I’ve been playing is the Complete Edition, it includes all (as far as I am aware) previously released DLC, including various Stories (which are pre-baked campaigns) and features such as children (from The Little Ones DLC) plus some other more subtle features that I’d simply be reading from a press release if I included here. I’m brand new to this game, so coming into This War of Mine for the first time on the Switch and with all DLC felt quite daunting. 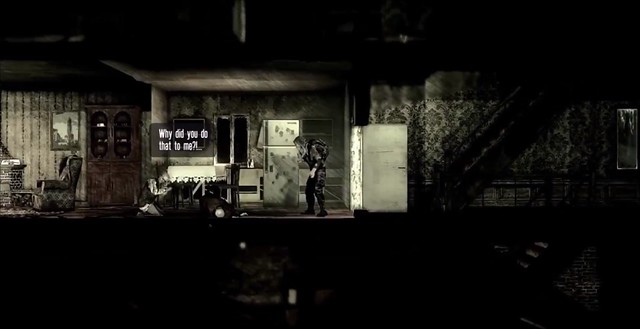 It also felt very, well, complete, with an absolute ton of content to sift through. The basic idea for the story mode begins by pitching players into the shoes of a small, dilapidated group of survivors who have occupied an abandoned home. The building will be crumbling and susceptible to the elements, with little defense against other raiders and hostile forces, but the more pressing concern will usually be to set up essentials like food, clean water and somewhere to sleep.

As with almost all survival games, crafting makes up a large part of the day, which is always too short. Even with two or three survivors each doing different tasks, the player will always struggle to find enough hours in the day, with the only potentially limiting factor being that you may run out of materials before you run out of time. That’s where scavenging (which is done at night) comes into play. Each night, players must decide who will sleep, who will stay on guard and and who will scavenge. Anyone awake overnight will of course be tired and therefore not much use the following day.

Scavenging can also be quite dangerous. New locations will be opened up every night, but locations like supermarkets or hardware stores that have obviously powerful rewards will often be filled with dangers. Without a firearm (or at least a hand weapon) the survivors sent out to scavenge will rarely have the ability to sufficiently defend themselves. On the plus side, like everything else, these things (along with lots of supporting items like crowbars, spades etc) can be crafted to speed up and support the scavenging process. 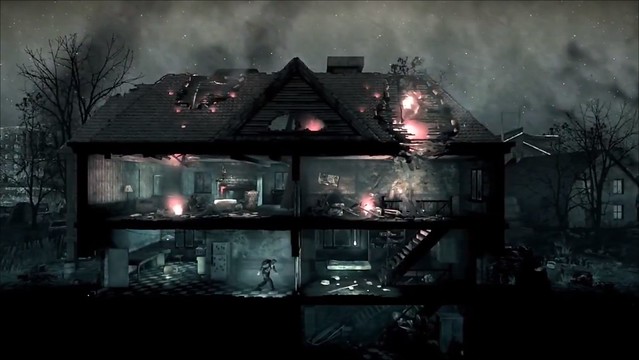 Not everyone is out to hurt the survivors though, and some houses are occupied by the lonely, scared and even dying. Sometimes these people will be open to trade, or on other occasions they’ll simply plead with you. I recall breaking into the home of an elderly couple who were more frightened of me than I was of them. I didn’t hurt them, but as the old man followed me around the house, he explained that his wife needed the medication, how they couldn’t find food or firewood. I took only the bare minimum that I needed to survive until the next day, but even so, my character was described as feeling “sad” next day, and so did I.

Games that tell emotionally affecting stories are becoming more frequent, but when they reach the level of acute and prolonged humanity that This War of Mine does, then it’s certainly an achievement. As always with a Switch reboot, I feel that experiencing last gen titles on a small screen in an immersive way only enhances the experience as, of course, does the flexibility of handheld play. As a result, I highly recommend This War of Mine: Complete Edition on Switch – it’s a game that I love, despite its harrowing nature. Well worth a look.