If you plan on picking up Lince Works’ Aragami: Shadow Edition for the Nintendo Switch, you’ll be treated with not only the full version of the game, but also the Nightfall expansion pack and all of the subsequent DLC that released for Aragami on home consoles and PC. Not only that, but the Switch version will launch with cross-platform co-op support, too.

What this means is that you’ll be able to play while on the go, or play from the comfort of your own couch at home while also teaming up with other Switch users, or Steam users putting in the work from their PC, or Xbox Live users who own an Xbox One.

Lince Works announced that they teamed up with indie publisher Merge Games in order to bring Aragami: Shadow Edition to the Nintendo Switch. 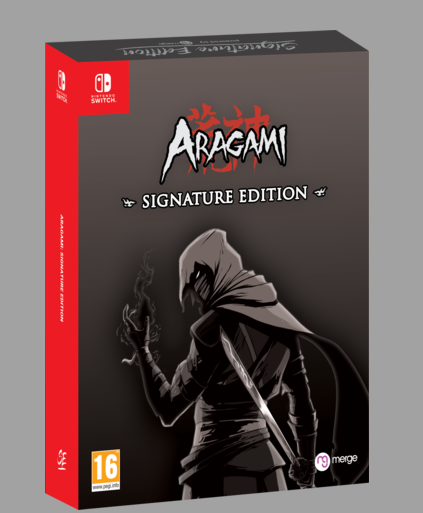 The Signature Edition of the game comes with a region-free copy of Aragami: Shadow Edition, along with two limited edition enamel pins, the game’s original soundtrack, an artbook, a Sierra box with a foam insert, an outer sleeve with alternative artwork, and a collector’s art card.

The Signature Edition is currently available for pre-order for $49.99.

The game itself is a throwback to From Software’s Tenchu series on home consoles from the yesteryears of gaming. You’ll play as the eponymous hero Aragami, as you attempt to help free the imprisoned girl who summoned Aragami back from the underworld, Yamiko.

You’ll travel through various ancient locations, using stealth tactics and the power of the shadows to overwhelm your foes.

Much like Tenchu, you have a choice in how you approach the way missions and combat encounters unfold, whether that be facing enemies head-on or using the shadows to your advantage and literally as a weapon.

Aragami is currently available right now on PC and Xbox One, but you can look to get the game on the Nintendo Switch starting February 21st.