It didn’t take Thomas Moon Kang’s One Step From Eden to hit its initial Kickstarter goal of $15,000 after spending just a couple of days on the crowdfunding platform. The deckbuilding roguelike action game is a pixelated adventure that attempts to revive the combat mechanisms and tactical systems that were present in Capcom’s Mega Man Battle Network.

The gaming audience who managed to catch wind of the campaign seemed enthralled at the idea, and were quick to support it, especially when they found out that the Nintendo Switch would be receiving a version as part of the stretch goals.

At the writing of this article, One Step From Eden has already amassed more than $23,000. The Nintendo Switch stretch goal is currently basked in mystery, but it’s a couple slots away from being reached, somewhere in the $60,000 or $80,000 range.

The game itself is a deckbuilding game where you collect items and build out your deck using a variety of cards. Each card gives you various abilities and skills to utilize on the battlefield. This ranges from beam attacks, to elemental status effects, to various defensive buffs. The game is played out on grids, where players will have to navigatre around a battle board and utilize their different abilities in real-time fights.

The board is broken down into two sections: red and blue. Player’s can only move on their side of the board, while enemies are restricted to their side. So you can’t up behind foes or nestle into the midst of them. You have to stay on your side and dodge their attacks that come your way. This creates a very dynamic playing field.

It’s also rare we see a tactical, grid based game that plays out in real-time, which makes it hard to compare it to other games, but the combat is extremely fast-paced. Players will also have access to eight different characters with different skillsets.

As you collect cards and build out your deck, you’re able to mix and match the synergies of different attack and support cards to build your own devastating combos and attack chains.

The more you gain access to higher level cards, the harder the challenges and the more difficult the enemies become. There’s also a 9 Stages of Hell mode, along with 200 different cards to collect. 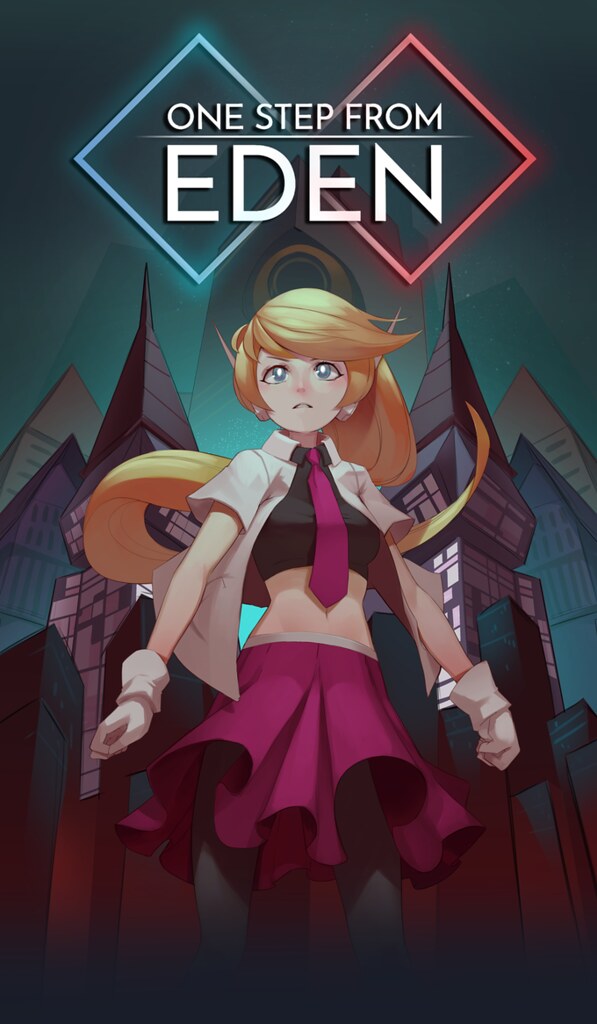 There will be full controller support, along with mouse and keyboard play. The developers will also be including Steam Workshop support so you can add your own cards, attacks, enemies, and stages, and there’s a local co-op and PvP mode planned for release.

The worlds and battles will be procedurally generated, but you’ll also have the ability to spare or kill certain foes, which will determine which ending you unlock.

You can download a free demo of One Step From Eden from over on the GameJolt page.

If you like what you play you can then head on over to the Kickstarter page to contribute some coins.