It’s another week, which means there’s another new Around The Verse episode for Star Citizen. This week they cover one of the aspects of the development that we don’t hear much about: audio.

Star Citizen is a very atmospheric game, and the audio plays a distinct role in bringing the vast universe of Cloud Imperium Games’ project to life. We actually get a good look at what the sound designers’ hangar looks like, and the process of recording and capturing a lot of natural sound effects.

You can check out the 14 minute video below to get an idea of how the sound is captured and how it’s utilized within the game’s runtime environment.

The crash landing effects were composed of a bunch of large rocks and concrete blocks being dropped from a high place down onto a metal plate.

Further into the ATV, we also get a slight look at the new improved and overhauled advanced flight model system, which will be finely tuned around high-end PC gaming joysticks.

The improved flight models was one of my biggest criticisms of the game while it was early in development, but it’s cool to see that they’re refining this as they head toward the alpha of Squadron 42 in early 2020. 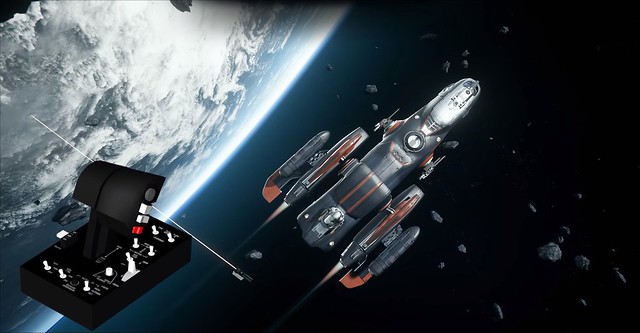 Further on we get a look at how the procedural design tools work, where the game’s graph nodes are used to mix and match different kinds of rooms that the artists have design to create custom truck stops throughout the galaxy.

The procedural elements for the truck stops generates a very large amount of different possibilities and outcomes from the props on shelves, to the shelves themselves, to the advertising you see throughout the shops, to the personal hubs that players can interact with.

It’s explained that a lot of the tools have been improved since CitizenCon, moving from a Python wrapper into an integrated C++ tool that allows for direct implementation into the engine workflow. What this means is that it takes less time to iterate the tools to improve procedural implementation and allow for artists to create a wide range of different assets that can appear in a number of different ways within the game’s truck stops.

And finally, they talk a little bit about the new Mobiglas 3D map feature that will be implemented into the game. The 3D map isn’t just there for looks, it’s to make things easier for players to navigate through some of the more complex regions in the game. This is actually a really good feature to be implementing now instead of later because the maps are only going to get bigger, more complex, and more layered. And with Squadron 42’s alpha on the horizon, it’s definitely useful to have it ripe and ready instead of trying to scramble to get it done at the twelfth hour.

The 3D map is still in the pre-visualization phase, and they haven’t quite worked out how enemy and friendly NPCs/players will be displayed, as well as how the new reputation system will affect how other characters are displayed, but it’s coming along at a decent clip.

You can keep track of the development for Star Citizen by visiting the official dev roadmap page.