Reports are going around that Star Wars: 1313 is coming back. YouTube channel Star Wars Comics has apparently reached out to LucasFilm and got a response from the Kathleen Kennedy-led outfit that gave him the blessing to move forward with making the game.

The news was picked up by Disney Star Wars Is Dumb, which covered the basic premise of the story, which is that YouTube channel Star Wars Comics was allowed to make the fan game so long as they don’t make money on the project. So it won’t be receiving any donations and it won’t be crowdfunded. The content will be crowdsourced, though, and there are concept artists, animators, modelers, and texture artists joining the team to work on the cancelled game.

You can check out some of the artwork for the project so far in the video below.

As explained in the video, he received a letter from LucasFilm, not necessarily giving him their blessing but rather explaining to him the ins and outs of how fan projects are made and approved of by Disney. So in the video he outlines how usually when it comes to fan-films there’s Disney and LucasFilm, and if both give their approval (or don’t send out a cease and desist) your project is good to go. However, when it comes to games there’s a third vector to consider: Electronic Arts.

For those of you who don’t know, Electronic Arts signed an exclusivity deal with Disney to produce Star Wars games (for worse or for… worst?. So to get around this issue, LucasFilm basically said that a fan game would be possible but using any of the Star Wars names or assets in the project would be “inappropriate”. 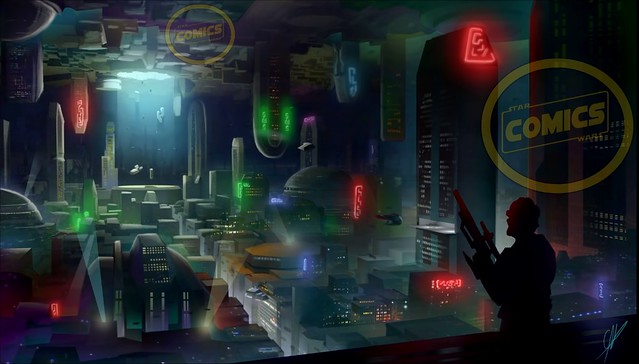 Disney Star Wars Is Dumb pointed out that just because a game doesn’t use Star Wars in its name doesn’t mean it’s safe from LucasFilm. A perfect example of this is Apeiron Game, which was supposed to be a remake of Knights of the Old Republic, but LucasFilm sent out a cease and desist.

LucasFilm also tried something similar with the Darth Vader documentary, but the court struck it down and, as some of you may know, the director, Marc John, is working on Episode Backlash, which chronicles the rift that Disney and LucasFilm has created with its own fans.

Now Star Wars Comics seems excited about the project so far, and claims that he will avoid using the Star Wars name in the game, so it will simply be called 1313: Episode I. None of the assets are from existing games or projects, and he claims that the game will be heavily inspired by the cancelled Star Wars: 1313 game. Of course, this still doesn’t get around EA’s involvement, which could still end up netting him and the rest of the team a cease and desist letter on behalf of the gaming publisher.

However, for now, it appears 1313 is back and updates will be rolling out on the team’s progress as they attempt to revive one of the many cancelled Star Wars games that gamers actually wanted to play.

(Thanks for the news tip Itchy Bacca)