The Game Bakers announced that a brand new adventure game is on the way called Haven, which is about two lovers who make an escape from their world and venture into a completely new world where they must struggle against the inhabitants and find a haven in which they can learn to love each other through the turmoil of survival.

The game was announced with a teaser trailer featuring the two main characters flying across a red surface while creating grassy earth beneath them. Some house-synth plays in the back, which sounds very much like Danger’s tracks from Furi, which had one of the best soundtracks in gaming back in 2016.

You can check out the teaser trailer below.

As The Game Bakers have noted on the Steam store page, this is not Furi 2. Although, something makes me think that maybe that counter-announcement could be a red herring and maybe this does tie into Furi 2? Or maybe I’ve just been led around by the nose too often by marketing from people like Hideo Kojima.

Anyway, Haven is an adventure RPG that will be released on home consoles and PC in 2020. The game will be a single-player game with the option to play co-op with a significant other.

The announcement briefly teases the dialogue system and the combat system, which appears to be turn-based like a traditional JRPG. We don’t actually get to see much of the gameplay, but with a year to go before release there’s plenty of time to explore that concept.

Most notably, however, is that the game’s story centers around an interracial relationship between two star struck love birds. 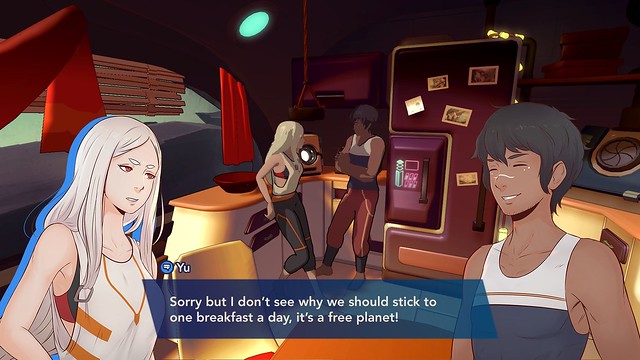 It’s rather obvious what sort of sociopolitical messaging is being presented in the game.

The entire premise centers around the two lovers escaping from their home world in order to find a new life together on a lost planet while they fight for their own survival and come to terms with their love.

It’s a rather distinct message that has been echoed throughout a lot of media lately, including movies, music, and even commercials.

This kind of controversial take on storytelling hasn’t always gone down well with the general public. Nevertheless, The Game Bakers, a French studio located in Montpellier, will try their hand at crafting a narrative around this concept, which many could very well classify as getting “woke”.

We’ll see how well it does when it releases in 2020 on PC and home consoles.

To follow the development of Haven you can visit the Steam store page.