IGN Gets Called Out For Affiliate Links That Breach FTC Standards

[Update 3/14/2019:] IGN has updated their web pages and now include an affiliate link disclosure for their content.

[Original article:] A lot of major media networks use automated affiliate links to help make some cash off of the hyperlinks featured in the articles across the website. Usually there are auto-link vendors such as Viglink or Amazon that offer such services, and you’ll occasionally encounter them across websites. What you probably didn’t know is that media publishers are supposed to disclose that they get paid for hosting these affiliate links on their site, and must declare that these are advertisements or that they make bank on said links. Well, IGN was called out recently for including affiliate links across nearly the entire site without disclosing that fact.

The news comes courtesy of a post over on Kotaku In Action, where users are being encouraged to contact the Federal Trade Commission about disclosing affiliate links.

Evidence requires actually visiting IGN since the affiliate links don’t pop up via archives, but user A-cool-dra explains that they tried contacting the entertainment media website multiple times about the issue, writing…

“Recently, I tried to contact them about it seeing the script was still running, but have not received any word. I reached out again a few days ago and still nothing. As mentioned when I first posted about this, regular archives won’t show the affiliate links due it being done by a script. […]”

They provide a number of different links in the thread to provide examples of where the affiliate links pop up. And sure enough, there are affiliate tags for Amazon links in the articles, with the IGN tag specifically reading: tag=ign_contextual-20 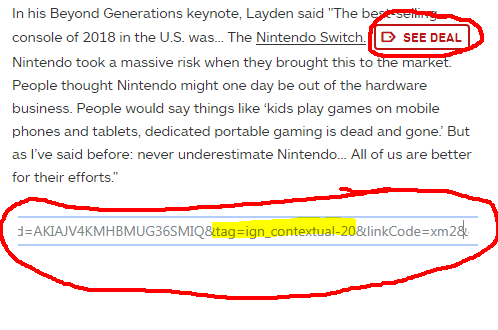 You can see the link for yourself with the “See Deal” tab over on the example page here:
https://www.ign.com/articles/2019/02/12/playstation-exec-never-underestimate-nintendo-dice-2019?read

You’ll notice that there’s no disclosure about the affiliate deals anywhere on the page, likely giving people the impression that IGN is just showing deals for the sake of showing deals to help you save a buck, and not necessarily because it’s a commission-based affiliate link.

All of this was covered in the updated guidelines from the FTC back in June of 2015.

According to the Federal Trade Commission, disclosures must be clear and conspicuous and not hidden behind hyperlinks, icons, or tabs, where they explain on the FAQ page…

“As for where to place a disclosure, the guiding principle is that it has to be clear and conspicuous. The closer it is to your recommendation, the better. Putting disclosures in obscure places – for example, buried on an ABOUT US or GENERAL INFO page, behind a poorly labeled hyperlink or in a “terms of service” agreement – isn’t good enough. Neither is placing it below your review or below the link to the online retailer so readers would have to keep scrolling after they finish reading. Consumers should be able to notice the disclosure easily.”

IGN’s disclosure about affiliate links was originally tucked away over on their standards and practices wiki, but that page has been deleted and now you’ll find their disclosure policies tucked away separately on the Ziff Davis privacy policy page.

The KIA thread is encouraging users to reach out to IGN through their corporate contact page to at least add page-specific disclosures to inform readers about the affiliate links, and barring that contact the Federal Trade Commission using their contact submission form to alert them about IGN’s failure to comply with the updated guideline policies.