Korean developer Jandisoft announced that they have a brand new MMO in the works called Mad World. The game is a grimdark, post-pocalyptic, hand-drawn game that features both traditional PvE and PvP modes, along with some of the trappings of recent survival simulators that sport resource gathering, skill trees, ability progression, boss raids, and attempting to survive against abominable horrors of the flesh.

The dystopian world that Jandisoft has developed for Mad World is almost reminiscent of Darkest Dungeon as far as tone is concerned, but the actual gameplay is more of an isometric hack-and-slash title. 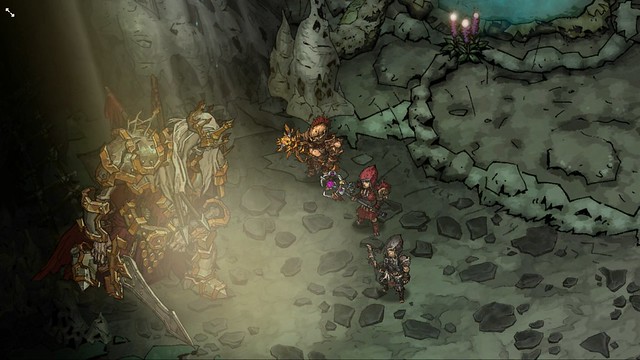 It also stops just short of diving into the Lovecraftian mythos, avoiding going all-in on the Eldritch horrors unlike Surefire Games’ The Cthulhu Diary, which is currently in Early Access on Steam, or Steve Gal’s Into The Fray, which is also available on Steam.

You can see what the gameplay is like with the trailer below, which covers some of the basics of the gameplay, some of the exploration, the crafting mechanics, the survival mechanics, and the fantastic looking art, which seems quite reminiscent of Klei Entertainment’s Don’t Starve series.

Part of the game’s appeal is how the trailer steadily escalates the conflict. It starts with shirtless strong-Johns working out in the harsh cold, and eventually gathering enough supplies to acquire better gear, commandeer a pet that you can ride on, and eventually joining up with other players to fight against larger than life bosses, some of which have some rather disturbing designs.

Mad World is currently being built on top of HTML5 and will run in most browsers. It’s also being designed with cross-platform compatibility in mind for PC gamers and mobile users, avoiding any sort of installation clients that you have to download.

Jandisoft has plans on fully releasing the game at some point in 2019. In the meantime, however, there are alpha and beta tests planned to take place, which gamers can sign up for over on the official Mad World website.