[Update 2/13/2019:] It appears as if Pensacon deleted their Twitter account following the story being published about them threatening to arrest con-goers there to support Vic Mignogna.

[Original article:] The upcoming Pensacon 2019 convention, which is billed as an “inclusive” event, is set to get underway between February 22nd and February 24th, 2019 at the end of the month. The convention covers everything from video games to comic books to anime and plenty of sci-fi in between. Some anime fans publicly discussed attending the convention and doing so in support of anime voice actor Vic Mignogna, who has been accused of misconduct. However, many fans feel the evidence at the moment is spurious and being led on by a campaign to get Mignogna kicked out of the industry by vindictive individuals. Upon learning this, Pensacon’s official Twitter account threatened to have Mignogna supporters arrested on sight.

The threat first came via a tweet on February 12th, 2019, which was response to someone publicly trying to get supporters to attend and meet up at Pensacon 2019 in Pensacola, Florida at the end of the month.

Yes, please do. We would love to have some folks arrested.

Some of the people in a completely unrelated thread noted that if they saw Monica Rial at the event – who is another voice actress who came out against Vic Mignogna – that they would boo her. Pensacon leaped into the thread like a spandex-wearing vigilante leaping through the window of a shapely, young woman’s apartment during the middle of the night, declaring that anyone who attempted to harass Rial would be arrested.

They also threatened that anyone who even brings up the issue of Vic Mignogna would be asked to leave or escorted off the premises by police.

And anyone who harasses her at Pensacon will be arrested. You have been warned.

Anyone who brings up this issue will be asked to leave. If they do not, law enforcement, who will be on-hand, will take over. That is not what the convention is about.

Some of the people they interacted with said that they weren’t even going to the event, but that didn’t matter, Pensacon stated that anyone even being influenced to ask about the Vic Mignogna situation or some of the false allegations that have surfaced in the situation involving doctored pictures, will be escorted off the premises. They also told the user that they have “eyes everywhere”. 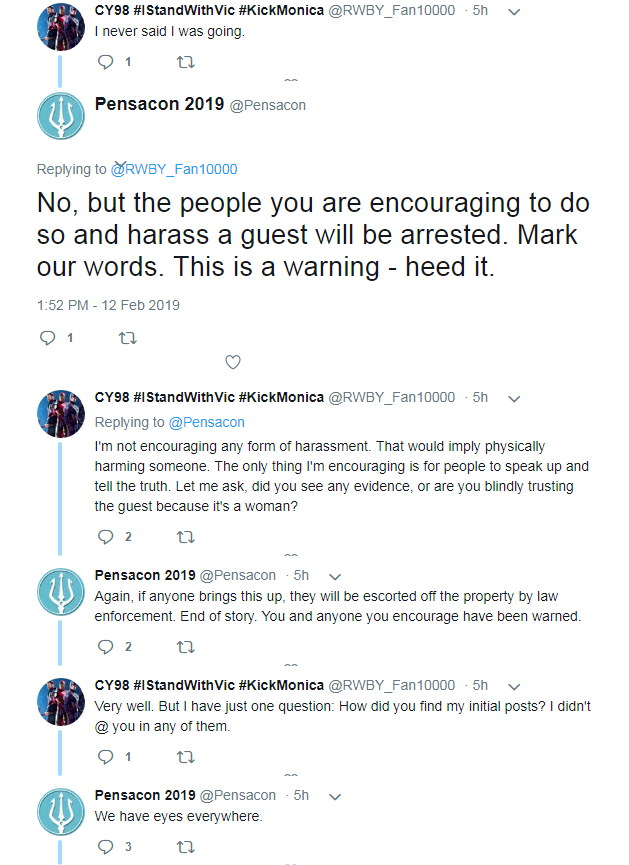 As noted in the Twitter threads, it was reiterated that there still hasn’t been solid evidence made available against Mignogna, even though Funimation claims that there was enough evidence from an “internal investigation” that prompted them to fire Mignogna from his current duties and cancel all future contracts with the voice actor. The situation was covered recently by YouTuber The Amazing Lucas.

As noted in the video, fans of Mignogna who have been asking to see the evidence from Funimation’s investigation have been met with indignation from the anti-Vic groups who have claimed that people aren’t entitled to see the evidence. Regardless of Funimation’s own investigation, there still doesn’t appear to be any formal police reports filed against Mignogna for any sort of criminal or uncivil behavior.

Certain YouTubers have also recounted all of the allegations made against Migongna between 2004 and 2014 to see if they were legitimate or held any weight, which you can view below, courtesy of dannphan29.

But even going over the old allegations, most of the posts and accusations covered in the video note that it’s mostly just hearsay and anecdotes.

However, Pensacon, like a digital apparition hovering around Vic Mignogna supporters as some sort of ill-tempered omen, called the potential attendees “sad” and “delusional”. They also told them that they would be “watching”, like some sort of jilted stalker lurking in the bushes outside the home of an ex-lover.

These people are sad and delusional. Goodbye. We’ll be watching…

So keep in mind that if you have plans on attending Pensacon between February 22nd and February 24th, showing open support for Vic Mignogna or attempting to ask guests about the allegations could net you a night in the slammer, because Pensacon is always waiting, always watching.

(Thanks for the news tip House of Tath)