Another Around The Verse was uploaded for Star Citizen covering more of the game’s advanced features in the pipeline, as well as some of the ships in development, along with the enhancements of the visual effects for the damage models.

Early in the video we learn about a new feature currently in research and development covering the procedural damage filter for the thrusters. The thruster damage will include smoke effects, sparks, and different types of thrusts that will change how much flame or exhaust you’ll see from the rear of the ship depending on the damage that they’ve underground.

You can check out the 13 minute episode below, which also covers two of the upcoming ships currently in the gray box testing and development phase.

Later on in the video we get a look at ArcCorp, the city-planet that will canvas the entire planet.

The way the team designed the suburban areas of ArcCorp is that the highest buildings only reach 400 meters. They’re low-poly buildings but designed to look good enough so that when players get close to the highest buildings, it still looks acceptable. Additionally the way the city works is that the buildings on the ground level of the suburban area are actually part of an occlusion parallax map, so it looks like there’s still city depth from when you’re flying from 400 meters above the ground level. 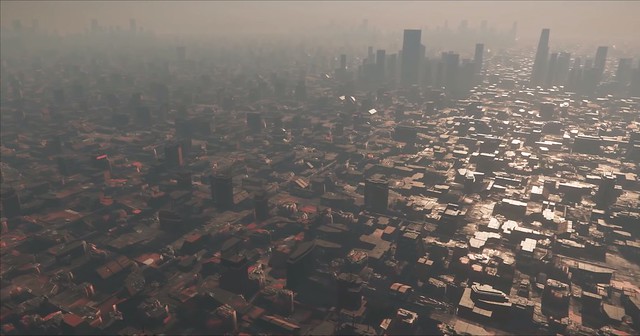 For the more metropolitan areas, the buildings will reach around 1 kilometer in height, which will work as the no-fly-zone for the ships. The team is also testing how they want the ship’s AI to handle no-fly-zones, so that players can turn on the ability to have the computer take control of the ship and fly them to a safe vertical level.

However, if you feel like you have the skills to scour the city, you can freely fly through the city and land where you see fit, and then attempt to snipe from a rooftop, stage a meet-up, or exchange some smuggled goods for a few credits.

I love that the team is keeping the design of ArcCorp emergent, which will definitely make for some awesome gameplay moments developed out of the mad minds of creative players.

You can keep track of the development of Star Citizen and its eventual 3.5 roll out by visiting the developmental roadmap page for an outline on what’s coming down the pipeline.