The Verge – the Left-wing media outlet infamously known for misreporting news, failing to disclose personal relationships, and creating a terrible YouTube video on how to build a PC – has been making headlines around the web for copyright striking YouTubers who criticized their video about how to build a PC.

The copyright strikes were used as a form of censorship to wipe criticism off the net from medium-to-large YouTubers who took swipes at The Verge for the poorly constructed and erroneous guide on how to build a PC.

On February 13th, 2019 Richard Masucci, the face behind ReviewTechUSA, did a five minute video explaining how he received a copyright strike for his livestream video criticizing The Verge’s video about putting together a PC.

ReviewTechUSA wasn’t the only one who got hit with the copyright strike from The Verge. Another YouTuber also reported being hit with a strike, too.

According to Kyle, from the YouTube channel BitWit, he too was hit with a copyright violation. He shared the messages on Twitter.

Welp, @voxdotcom just removed the “Lyle Reacts to the Verge’s PC Build Video” claiming copyright violation and @YouTube, without warning, felt that was deserving of a strike against the channel. Watch out @ScienceStudioYT @TechYESCity @KristoferYee pic.twitter.com/jH5pW7rXDO 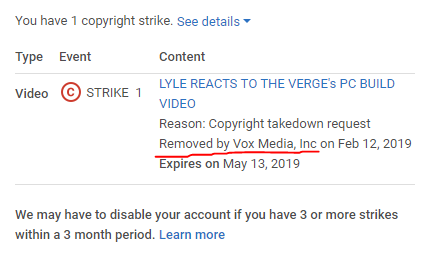 A full day later, after contacting YouTube about the false copyright strikes, YouTube responded to Kyle on February 14th, informing him that the copyright strikes had been removed from his channel and that the video was restored after someone manually reviewed the strikes.

Good news & update- My counter-notification to Vox’s claim was reviewed by YouTube in my favor and the reaction video is back up.

Kyle also shared part of the e-mail from YouTube to The Verge regarding the strikes, where they wrote…

“We are very concerned that your copyright notification may not be valid for some or all of the videos identified in your notification.

“Please keep in mind that in many countries, it is legal to use copyrighted works in specific ways without the owner’s authorization, particularly for transformative purposes such as news reporting, parody, commentary, or review.”

Kyle says that YouTube asked The Verge to explain why they were copyright striking other YouTubers who provided commentary on The Verge’s PC building video.

So far, at the time of writing this article, The Verge has not responded to YouTube’s e-mail, or at least the letter hasn’t been shared publicly yet.

On the bright side, at least some of the videos that The Verge hit with a copyright strike are now back and available for viewing again, including Kyle’s Bitwit video, which you can check out below.

(Thanks for the news tip Blaugast)