People Can Fly announced that Bulletstorm will be releasing on the Nintendo Switch this summer under the title Bulletstorm: Duke of Switch Edition.

The re-release of the game will feature the content from the remastered edition of the game that Gearbox Software put out back in 2017 for the Xbox One and PS4. This means that you will have full access to the single-player mode starring Grayson Hunt, where he will attempt to get revenge on the man that betrayed him and his squad, as players will kick, zipline, shoot, and buzzsaw their way through the campaign mode back when Western developers were allowed to make hardcore, balls-to-the-walls masculine shooter games.

In addition to this, the Bulletstorm: Duke of Switch Edition will come with all of the additional DLC and the Duke Nukem add-on that allows you to play as Duke Nukem in the game.

According to People Can Fly CEO Sebastian Wojciechowski, the team fell in love with the Switch and wanted to do a port of Bulletstorm for Nintendo’s little handheld that could, saying in the press release…

“Since the first reveal, when I saw the capabilities of the latest Nintendo console, I knew that
we need to get Bulletstorm working on that thing! The whole team was super pumped up on doing that.”

The game is due out this month but we haven’t actually seen any raw footage of what the game will look or run like on the Switch.

I suppose we’ll find out what the game will be like when more gameplay footage and press materials are made available. 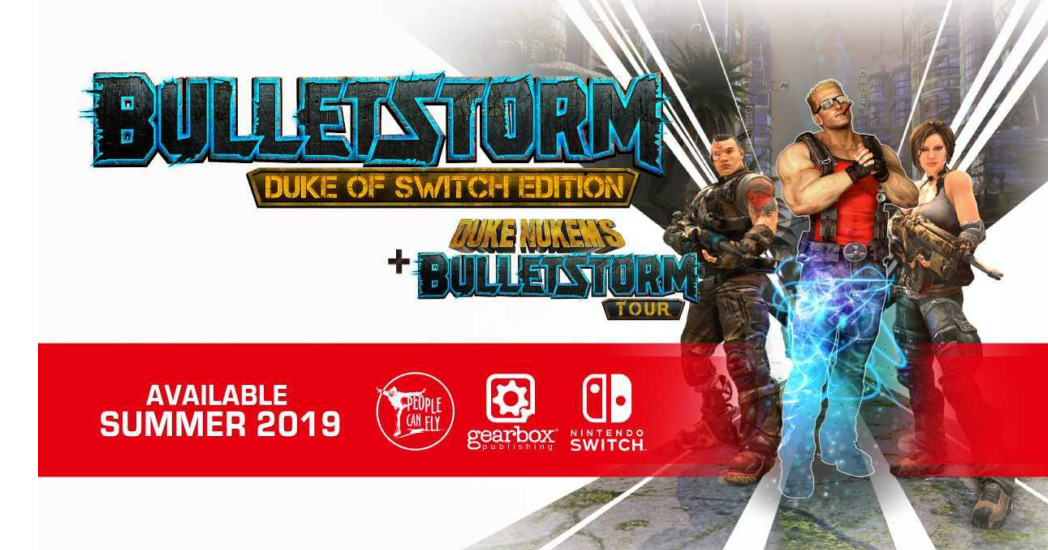 For now you can look forward to the game coming to the Switch courtesy of Gearbox Publishing and People Can Fly this summer. Bulletstorm: Full Clip Edition is currently available right now for the PS4, Xbox One and on PC.