Baldur Games and Ultimate Games S.A., announced that Grave Keeper will be launching on March 29th, 2019 on Steam for PC. The game will also be arriving on the Nintendo Switch starting at some point in the second quarter of 2019.

The game is positioned to look like another Diablo clone but it’s not quite like Blizzard’s long-running franchise of clicking and looting, slashing and scavenging. You definitely spend your time clicking and looting, and you definitely slash through enemies and scavenge through gold. In fact, that’s the main point of the game: you’re a n intrepid bounty hunter looking for a big pay day where most people can’t be bothered to venture to due to the inherent dangers therein.

You’ll face off against ghost, goblins, skeletons, and zombies alike, along with a bevy helping of bosses as you attempt to become a heroic legend by hunting down unspeakable horrors and grabbing as much loot as you can along the way.

But as mentioned just two paragraphs above, this isn’t quite the Diablo clone you may have been expecting. It’s a little slower, a little more methodical, and far less grim than Blizzard’s ARPG. In fact, the game is marked as being casual – it’s a game you pick up and play to have fun with; you don’t have to worry about minimizing or maximizing stats, or juggling through a spreadsheet of character builds in order to make your way through the most difficult aspects of the game.

Grave keeper is more of a game based around mechanical skill rather than the mathematical statistics that come with the under-the-hood character builds. You’ll need to properly aim your bow to take down skeletal warriors, and time your swings right to dispatch incoming hordes, all while avoiding being crowded or cornered by your bloodthirsty foes. 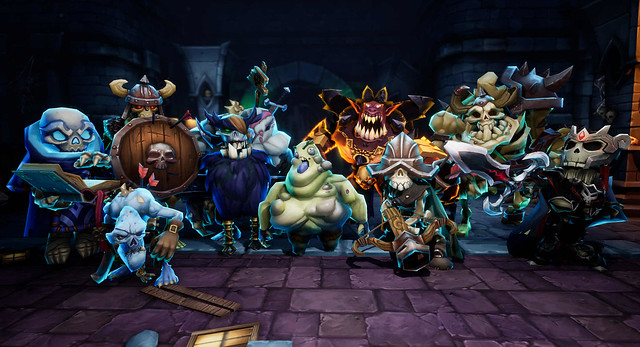 Whether or not this will appeal to the masses is a whole other story, but you could basically consider it as an ARPG-lite title that sports the hack-and-slash gameplay of other isometric titles but without the advanced elements that games like The Incredible Adventures of Val Helsing or Grim Dawn niche favorites. In other words, Grave Keeper is closer in likeness to MediEvil than Path of Exile.

You can still upgrade some of your skills and find new items, as well as partake in a versus mode come March 29th when the game launches on the Steam store.

Alternatively you can wait until the second quarter of 2019 and look for Grave Keeper to drop on the eShop for the Nintendo Switch.