Before DOOM: Annihilation even received its first movie trailer, the film was steeped in controversy surrounding identity politics after comments and social media messages from the cast, crew, and supporters of the project painted the film as some sort of Social Justice Warrior, pro-feminist re-imagining of the classic DOOM. This resulted in a giant textual firefight taking place on social media, which eventually attracted the attention of MAGFest director Nicholas Marinelli, who called gamers the “worst people” for criticizing the DOOM: Annihilation flick for being “woke”. Fast forward to the first trailer dropping and getting downvoted into oblivion; id Software was asked what they thought of the low-budget flick, and they very quickly and aptly responded by saying that “We’re not involved with the movie”.

The tweet went up on March 11th, 2019 shortly after fans began asking id Software on Twitter what they thought about the film and they responded with the following.

We’re not involved with the movie. https://t.co/Du3wHSHk44

The film has been universally downvoted on every single YouTube channel hosting the video, with majority of the comments complaining about the lack of Doom Guy being present in the film, as well as the movie looking like a Syfy cash-grab… except, there’s no cash to grab since it doesn’t sound like anyone will be purchasing this direct-to-DVD flick.

Now there are plenty of classic low-budget action-horror films out there that people love, from Escape From New York to Feast to Dawn of the Dead to The Horde. However, this film doesn’t look like a classic in the making, and a lot of people feel as if it’s another bad attempt at pushing the pro-feminist agenda into the action film genre, with plenty of commenters calling it “woke”. 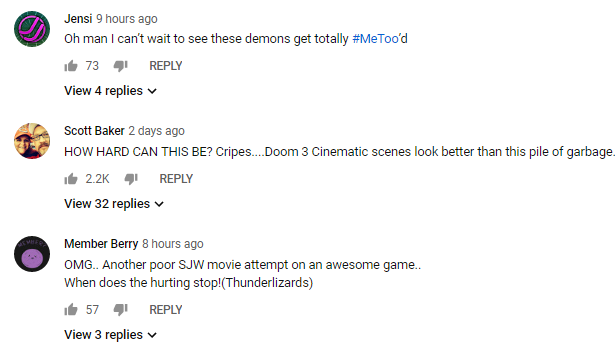 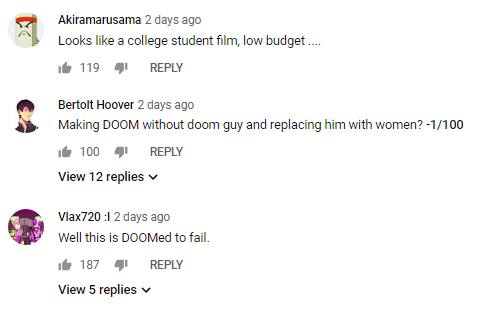 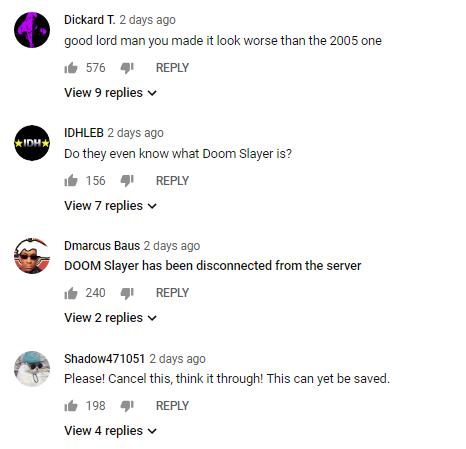 As some people pointed out, the film may not have been too bad if they picked a lead for the film that actually looked like she was capable of killing demonic monsters from hell. Others were just peeved that Doom Guy had been replaced.

As pointed out in a video by YouTuber Vee, there are people still vehemently attacking people who don’t like the film on social media.

Others are trying to get people to stop talking about the film, as if to give it a pass and allow Hollywood to keep encroaching on nerd culture with their agenda-driven nonsense. But most gamers with their head wrapped on right don’t seem to be falling for the Centrists™ concern trolling tactics any longer.

But even those who attempt to call it down the middle couldn’t help but crap on the film. ReviewTechUSA doesn’t go into why the film looks particularly bad other than the low budget, but the comment section didn’t spare any quarter for calling out why they think the movie looks bad.

The thing is, it’s not just that the Doom Guy isn’t in the film, it’s that it’s how the film is being promoted without the Doom Guy. For instance, in the 2005 film starring The Rock, they never said the Doom Guy was going to be in the film. However, they portrayed Karl Urban’s character, Reaper, as the Doom Guy once he got the “juice” and went into the rip-and-tear mode. It wasn’t a particularly good film, but they didn’t try to undermine the DOOM franchise by doing things like this.

Jesus fucking christ, “gamers” are the worst people on the planet. Holy shit, you people. If you are one of the misogynistic pricks on this thread, do me a favor and just don’t come to magfest, ok? We don’t want your money. https://t.co/LnelbIf0X1

The other thing is that a low-budget, direct-to-DVD film based on DOOM could have worked. There have been some awesome low-budget action flicks over the years that were DTV, including but not limited to Universal Soldier: Regeneration, Blood & Bone or the Undisputed films starring Scott Adkins.

In this case, getting off on the wrong foot by denigrating fans looking forward to seeing the Doom Guy ripping and tearing in a live-action film, and attacking gamers as a whole for not liking what looks like an action film portrayed through a feminist lens, is not going to help your product at all. Additionally, keeping quiet about it and letting Hollywood continue to rape popular brands to push their own ideological agenda is basically giving them carte blanche to keep doing what they’re doing, because they’ll assume no protest equals consent to rape (not that protesting has ever stopped Hollywood from raping before).

Anyway, DOOM: Annihilation seems poised to make the ever-expanding Get Woke; Go Broke Master List. We’ll see if the movie can salvage the piss-poor pre-release marketing and the cheap-as-a-Syfy flick trailer when it actually releases.

(Thanks for the news tip Vee)