Publisher Skybound Games and developer NMC Studios announced that a free-to-play Battle Royale game called Notmycar is in the works and it’s set to launch on Steam starting April 5th, next month. The Steam store page is currently live for the game, featuring a gameplay trailer and some in-game screenshots for the upcoming title.

Skybound also dropped an introductory trailer full of testosterone and hyper-masculinity. The trailer basically explains that you’ll need a powerful four-wheeler with lots of big guns compensating for nothing between your legs, and enough firepower to make the Benghazi firefight look like a Nerf session.

The introduction trailer doesn’t actually showcase anything about the game itself, though. It’s a palate teaser for gamers looking to get away from all the pansy sociopolitical pandering being put out by other AAA publishers trying to win over rainbow haired she-twinks and mohawk sporting lard-beast.

Notmycar is a throwback to the classic simcade games of old where you put some big bullet-hosers on a car and tore up the rubber on asphalt at 100mph while shredding metal harder Slash during his Guns & Roses days.

You can see what the actual gameplay looks like in the trailer below.

The teaser trailer basically reveals that the game is very much like Gas Guzzlers: Extreme but with more of a focus on precision aim firing, which is rare in most other vehicular combat games.

Much like PlayerUnknown’s Battlegrounds or Fortnite, you’ll start each match dropping out of a plane to the ground below. You’ll need to use your customized vehicle to acquire weapon caches from stashed over the island and then seek out and destroy the competition.

As the match wears on the battle arena continues to shrink, forcing players to engage until only one person remains. 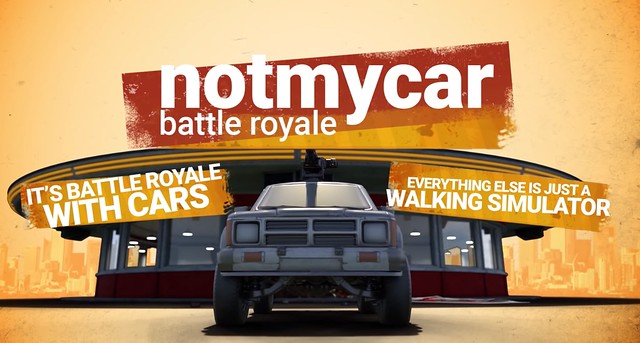 If the game plays solid and if the customization and vehicle line-up is diverse enough, then it could stand on its on two legs. It doesn’t appear to be as alluring as the gearhead-friendly Crossout, but if it plays solidly enough then it could be cool.

You can learn more about notmycar ahead of its April 5th release by visiting the Steam store page. So far the game looks like a really good masculine shooter game, which is in short supply these days.