[Update: 3/10/2019] R’lyeh Game responded to accusations of manipulation and has said that they did not manipulate reviews and would be willing to provide hardware and other information to provide their innocence. They also claim that Valve is discriminating against certain developers.

[Original article] On February 27th, 2019 Valve’s product release manager, Jason Ruymen, made two posts on Steam’s community page regarding Chinese publishers PurpleAir and R’lyeh Game having been banned from the Steam storefront for review manipulation. Ruymen kept the details minimal, which led a lot of gamers who have been following the recent Steam bans suspicious that this was an underhanded tactic from Valve in order to remove games from Steam that contained adult content. Some also ran with the theory that the developers were banned because the review sections contained links to the off-site R18+ patches for their games. It turns out that each group was right to a degree, and the situation wasn’t quite as clear-cut as either party made it out to be.

A Steam user did some due diligence by sifting through dozens of Chinese profiles that left comments on R’lyeh Game and PurpleAir’s products.

Some of the profiles that were sent to One Angry Gamer that were involved with reviewing games from both publishers did appear suspicious.

Despite having no info, no profile data, and no community activity, these profiles have somehow posted positive reviews for games like Love Shoot and PaPaPub, as depicted in the review section of the profiles for 422458985 and 1445696601. The same thing also applies to users like xingyueoxi or ash666, who have no products in their account but yet they have two product reviews in the database.

Other positive reviews from users like 1933769493 also look suspicious, since they only have one review in their profile and it’s for games like PaPaPub or Erolyn Chan Fight. However, to be fair, some of these profiles do have multiple games in their library, such as Grandpa Sun, who has 13 products in their profile but only one review, which is for PaPaPub. The same applies for users like Miao and salman, who – despite having multiple games in their library – only have positive reviews for games like Love Shoot or PaPaPub. This is not definitive proof of review manipulation, but it is highly suspicious.

There are various other users with the same sort of profile setup, where they have multiple games in their profiles but only positive reviews for the games from the publishers in question. Now this isn’t to say that these reviews from what appear to be actual users are review manipulation, but it is completely possible that they also may have been bribed or compelled to leave positive reviews for the game.

Obviously this doesn’t apply to everyone who has left a positive review for these games, but for the accounts mentioned so far, they definitely appeared to be suspicious or potentially fraudulent.

However, without a question, there was a legitimate review manipulation by PurpleAir.

The developer used an account called “Face” to post positive non-reviews for their three games, Erolyn Chan Fight, Piopupu and Doujin Jigsaw Puzzle. Now the thing is, these reviews were not positive fluff reviews, but were actually used to spread the R18+ patches for all three games. They contained the link to the patches and the passwords to download them from various websites. 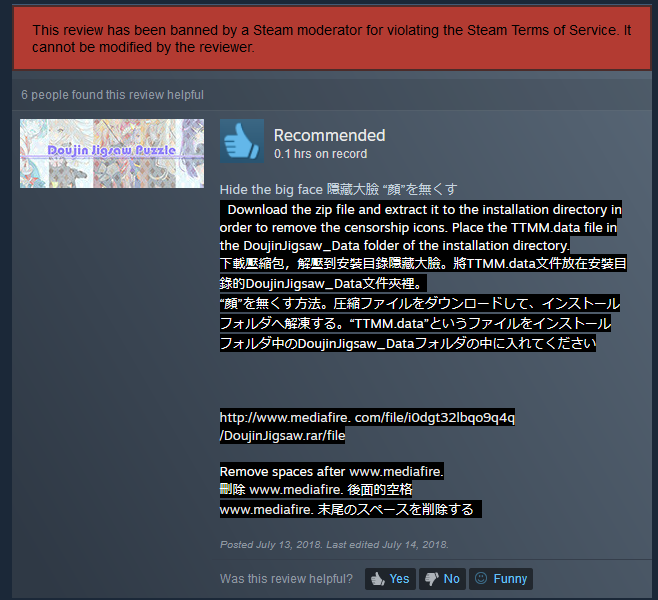 The “Face” account also made identical posts in the Steam forums on December 19th, 2018. The post from “Face” was pinned to the forums by the developers.

A couple of other accounts, such as 102928386 and lobev1, also attempted to spread the R18+ patches through the Steam reviews as well.

This actually does go against Steam’s rules, since they were positive reviews that weren’t actually reviews, but were rather used to spread the word about the R18+ patches. 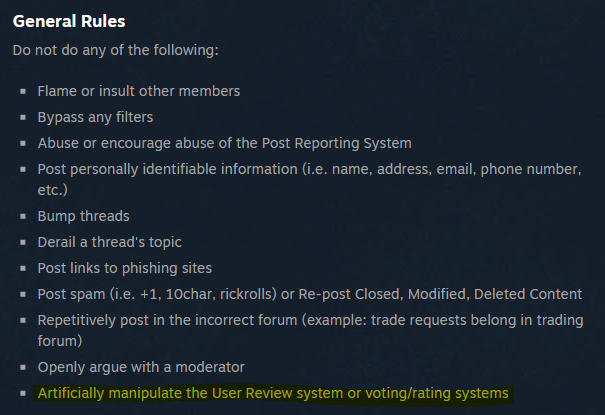 The one account that seemed to have direct ties to the developer actually had its review flagged and deleted by Valve for spreading the R18+ patches in the review itself. The ironic part about it is that while the other user reviews were definitely suspicious, there was no hard proof that they were paid for by the dev or were bot reviews that had any affiliation with the publishers. However, the one account that actually did show legitimate review manipulation that was actually tied to the developer was in relation to the R18+ patch.

It’s still unclear what tipped Valve off to the publishers or which reviews they considered manipulation, but we at least have some criteria of what they could have been working with to come to their decision. I did reach out to the developers about the bans but never received a response.

(Thanks for the information and the news tip Mellow)