Between the second and third quarter of 2019 Top Hat Studios will finally launch their digital distribution storefront called the Hat Rack. It was developed in response to Valve banning Top Hat’s Cross Love – Episode 1 from the Steam store on the spurious grounds of “child exploitation”.

In a press release sent out to the media, the online outlet will feature software tags so you’ll be able to easily find what you’re looking for, along with user reviews, and mobile APK support given that there are worries over Google Play censorship. For those of you who don’t know, Google Play has been forcing developers to censor innocuous things like cleavage in games.

Opposite of Steam, Top Hat Studios will also do transparency checks periodically where they will issue reports about the store and information about software store policies so that both developers and gamers know the rules of the trade. This is one of the issues that currently plagues Steam, where a lot of games get banned for nebulous reasons and Valve never ventures to explain to developers what content specifically triggered the ban or what can be done to prevent being banned. Valve also silently changed their policies so that they can selectively ban any game that they deem is “legally grey”. 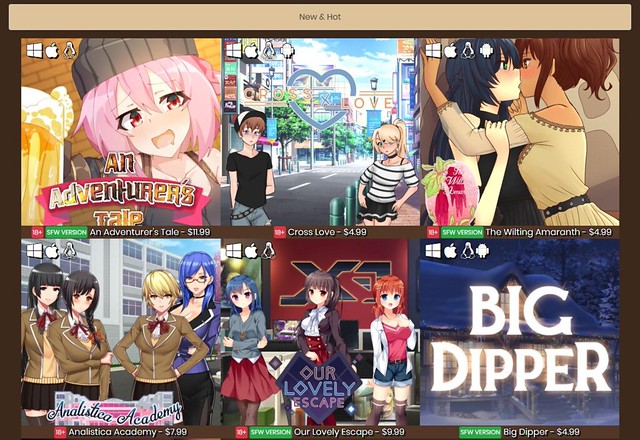 According to the press release, ahead of the launch of the storefront Top Hat has plans on discussing the legality of what they can and can’t sell, as well as what their overall goals will be for the storefront, and an outline for the policies that will affect both customers and the developers.

In the meantime, Top Hat is still publishing visual novel games and helping developers get their titles on Steam and crowdfunded through Kickstarter.

The visual novel Rainbow Dreams is an action visual novel from Epic Works currently seeking $2,000 to polish off the assets. They have plans on releasing a DLC patch containing R18+ content if the game does get accepted on Steam.

The visual novel is kind of neat because it combines the slice-of-life elements of typical visual novels, but in addition to the romance and comedy there are also action elements implemented to help give the visual novel some extra meat.

You can download a free demo of Rainbow Dreams from over on the Kickstarter page.

As for Top Hat Studios’ upcoming Hat Rack store, we’ll have to wait until the next major update to find out more about the store and what sort of software and policies will be implemented.