Lithuanian Twitch streamer and cosplayer, Karina “Karupups” Martsinkevich, was suspended from Twitch for 30 days for darkening her skin in order to cosplay as Lifeline from Respawn Entertainment’s Apex Legends.

According to an article published on April 15th, 2019 over on Kotaku, Karupups was suspended for 30 days after the stream was shut down during the middle of her cosplay tutorial on April 13th, 2019.

The cosplay consisted of changing her hair, putting on the accessories and darkening her skin, as pictured in the image below. 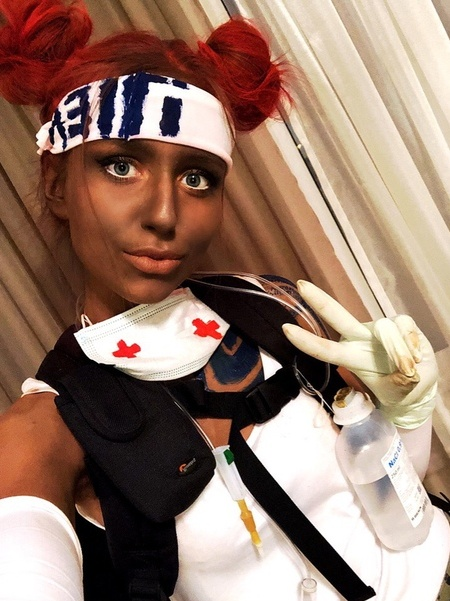 If you’re unfamiliar with the character from Apex Legends, you can view the image below to get an idea of what she was attempting to achieve. 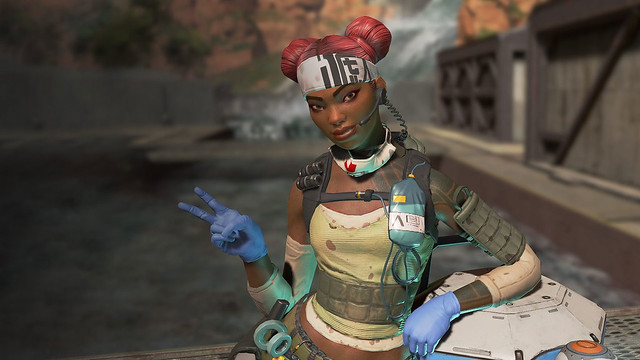 Karupups did a four and a half minute video about the ban, explaining under what rule Twitch decided to suspend her account, which was posted up on April 14th, 2019 on her YouTube channel.

Straightaway into the video she explains…

“The reason [for the] ban was [for] ‘engaging in hateful conduct against a person or group of people.”

This is outlined in Twitch’s rules and policies page under the “Hateful Conduct” section.

The reason Twitch adopted these methods is based on the Regressive Left’s establishment of Social Justice Warrior practices, where it reads…

“We are committed to combating abuse motivated by hatred, prejudice or intolerance, particularly abuse that seeks to silence the voices of those who have been historically marginalized. For this reason, we prohibit behavior that targets individuals with abuse based on protected category.”

Kotaku’s Cecilia D’Anastasio proceeded to condescend and talk down to minorities about what they could and should be offended about, dictating to those she feels are lesser than her by telling them that what Karupups did was offensive, writing…

“In the cosplay community, blackface is extremely controversial and widely looked down on. White cosplayers of brown or black characters like Overwatch’s Sombra and Michonne from The Walking Dead have been lambasted for the practice. While aesthetic fidelity can be a primary concern for cosplayers, altering racial appearance easily devolves into stereotyping and recalls the history of the practice. On top of that, black cosplayers have faced numerous barriers getting into the cosplay scene because, traditionally, there are comparatively few characters in video games, comics and anime who appear black or dark-skinned. According to several black cosplayers interviewed by Kotaku in 2016, they sometimes receive pushback and criticism for dressing up as characters who are not black.”

Actual minorities became indignant in light of D’Anastasio’s superiority complex and proceeded to put her in her place. 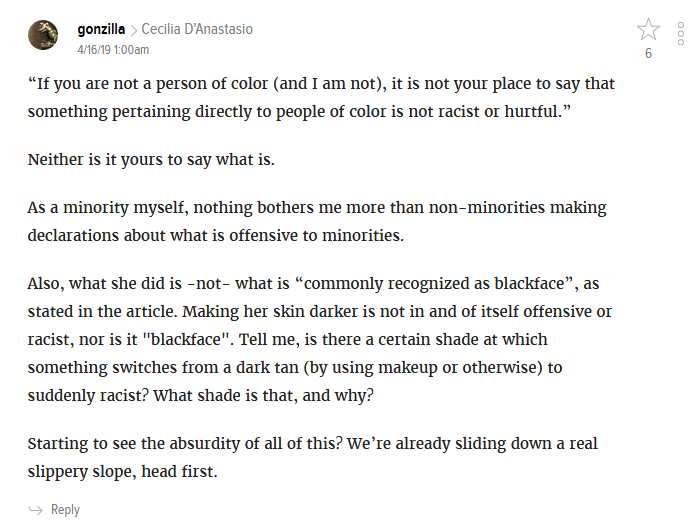 Kotaku’s comment section is somewhat divided, as actual minorities weren’t keen on white blogger dictating to them what they should be offended about, whereas white Liberal, Social Justice Warriors were telling minorities how and when to be offended, essentially embracing the typical Left-wing plantation owner mentality that the Left uses in order to keep minorities in check.

All sense of self-awareness was completely lost on the people attempting to control and authorize what minorities are allowed and not allowed to find offensive.

Thankfully the most popular comment in the Kotaku thread is one that attempts to appeal to common sense.

Ruenin lays it out pretty blatantly. 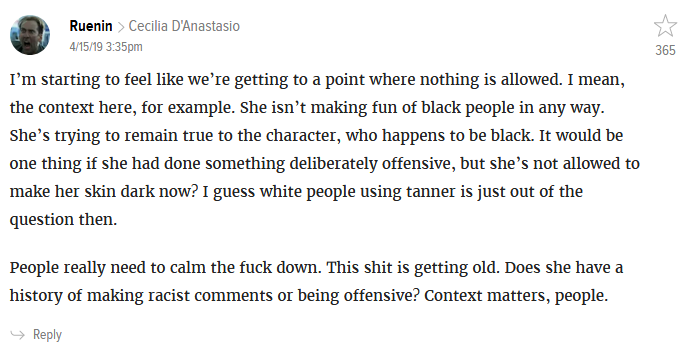 As some of the more level-headed and less uneducated people pointed out: not every other region on the face of the planet has any sort of knowledge about America’s specific history regarding blackface, and therefore other people – especially those in Lithuania – shouldn’t be expected to know about the social decorum surrounding very specific American politics. What’s more is that dressing up like a character and attempting to accurately portray them via cosplay is not blackface. It’s called cosplay!

Nevertheless, in this increasingly insane world we’ve seen how Social Justice Warriors have been using this as a way to to come down hard on cosplayers who use any sort of tanners, skin modifiers, or coloration to more accurately portray the fictional characters. In fact, a fairly large scale Disney Facebook group also prohibited members from altering their skin color (specifically darkening it) for the purpose of cosplaying, lest they get banned.

One must question at what point do people finally put their foot down and say “enough is enough”? Because at it stands the only thing this sort of cosplay punishment will do is create racial resentment toward blacks and black fictional characters, and reduce the likelihood of people even wanting to bother to cosplay as those characters.

(Thanks for the news tip DigitalTragedy and Voice of Fanservice)