Hopoo Games’ Risk of Rain 2 was published by Gearbox and released onto Steam at the end of March. The game entered into Early Access to overwhelmingly positive feedback from the Steam crowd, with a lot of high praise and a strong sense of quality and fun-factors. If you’re the kind of gamer who doesn’t care about grinding through the game, you can get your hands on some cheats that will make survival in the outer realms a heck of a lot easier.

There’s a free cheat trainer available for download for Risk of Rain 2 from the Mr. Antifun forum.

For the infinite jumping ability cheat, jump once and then activate the cheat. The same applies for the skill cooldown cheat, which will require you to use a skill first before activating the cheat.

There’s a second cheat trainer available for download from the Megadev.info page.

The second trailer offers free cheat options and premium cheat options. You can check out the offerings below:

The money cheats in particular will likely be useful in addition to the god mode given how unrelenting Risk of Rain 2 can be. You’ll be bombarded from left and right, top and bottom and all over, so it would probably be extra useful for newbies. But circling back to the money cheat… the useful part about it is that you can just keep spamming it incessantly to gain infinite amounts of money. It’s super useful if you’re struggling at the beginning of the game and need some quick cash fast. 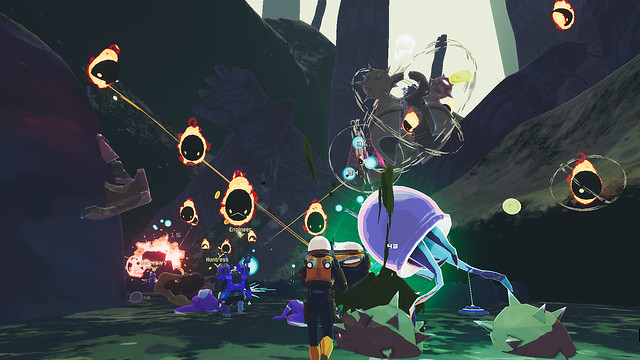 There’s one more cheat trainer you can also get your hands on courtesy of Cheat Happens.

However, keep in mind that the trainer is premium, so you will have to put down coin for it. It sports the following options:

So it basically has all of the same cheats as the other two trainers, just with the extra ability to modify the game’s speed and edit the lunar coins. You can also change the experience point multiplier so you can earn more XP for doing less. It’s like going in and getting a pay raise at work while having your hours cut. Good times all around.

Risk of Rain 2, as mentioned, is survival shooter game for up to four players working cooperatively together via online play. The game allows you to loot and shoot your way through a theorycrafted adventure sporting 75 different items you can unlock, massive enemies you can fight, and giant 3D hand-crafted levels to conquer.

The game is currently available in Early Access and is expected to stay there for the next 12 months. So the full version with all of the content, featuring more than 100 items, 10 playable characters, 10 different stages, and 12 seemingly unconquerable bosses won’t be available until around this time in 2020. Even still you can get your hands on the game from the Steam store for $19.99.

And remember, since this game features online multiplayer, always cheat responsibly lest you get reported and VAC banned.