Back in the olden days game journalists used to be the best of the best. Gamers would turn to them for help on beating certain levels, overcoming difficult bosses, or getting their opinions on whether a game was actually worth the price of admission. Those days are long gone. In today’s era of activism blogging, “game journalists” are Liberal Arts majors with degrees in Gender Studies; they have no concept of hard work; they scoff at having to put in time to learn and master different control schemes or enemy patterns. What we end up with is soft-skinned, moldy-brained, problem-glasses wearing, soy-guzzling invalids. Quite naturally these gaming-challenged cretins lack the fortitude and skill to play real games like Sekiro: Shadows Die Twice, and the official Sonic Twitter account decided to have a few laughs (and teach a few lessons) at their expense.

After spending the last week complaining about Sekiro needing an easy mode, some journalists openly bragged about having to use cheat trainers in order to beat Sekiro (heck, he probably even used our cheat article for reference on where to find the best trainers).Worst yet is that one of the journalists who used the cheat trainer to beat the game was also one of the people who helped write a guide for Sekiro: Shadows Die Twice.

Well, the Sonic account didn’t let go of this unforgivable failing, and on April 9th, 2019, they proceeded to roast those incompetent journalists with a short clip from Sonic: The Hedgehog.

The clip starts and Sonic heads to the platform, glitches through the stage and passes the goal post. However, instead of being rewarded for cheating by using the glitch, the level complete shows a condescending message about using cheats only cheats yourself out of the experience of playing the game the way it was intended to be played.

The text in the video was actually based on a viral tweet made by Fetusberry on April 5th, 2019, which was in reply to the article from a journalist who proudly proclaimed that he had cheated to beat Sekiro.

You cheated not only the game, but yourself.

You didn’t grow.
You didn’t improve.
You took a shortcut and gained nothing.

You experienced a hollow victory.
Nothing was risked and nothing was gained.

It’s sad that you don’t know the difference. https://t.co/upkhLSNQNO

In case the tweet doesn’t work, you can view the image below, which is based on Fetusberry’s tweet above. 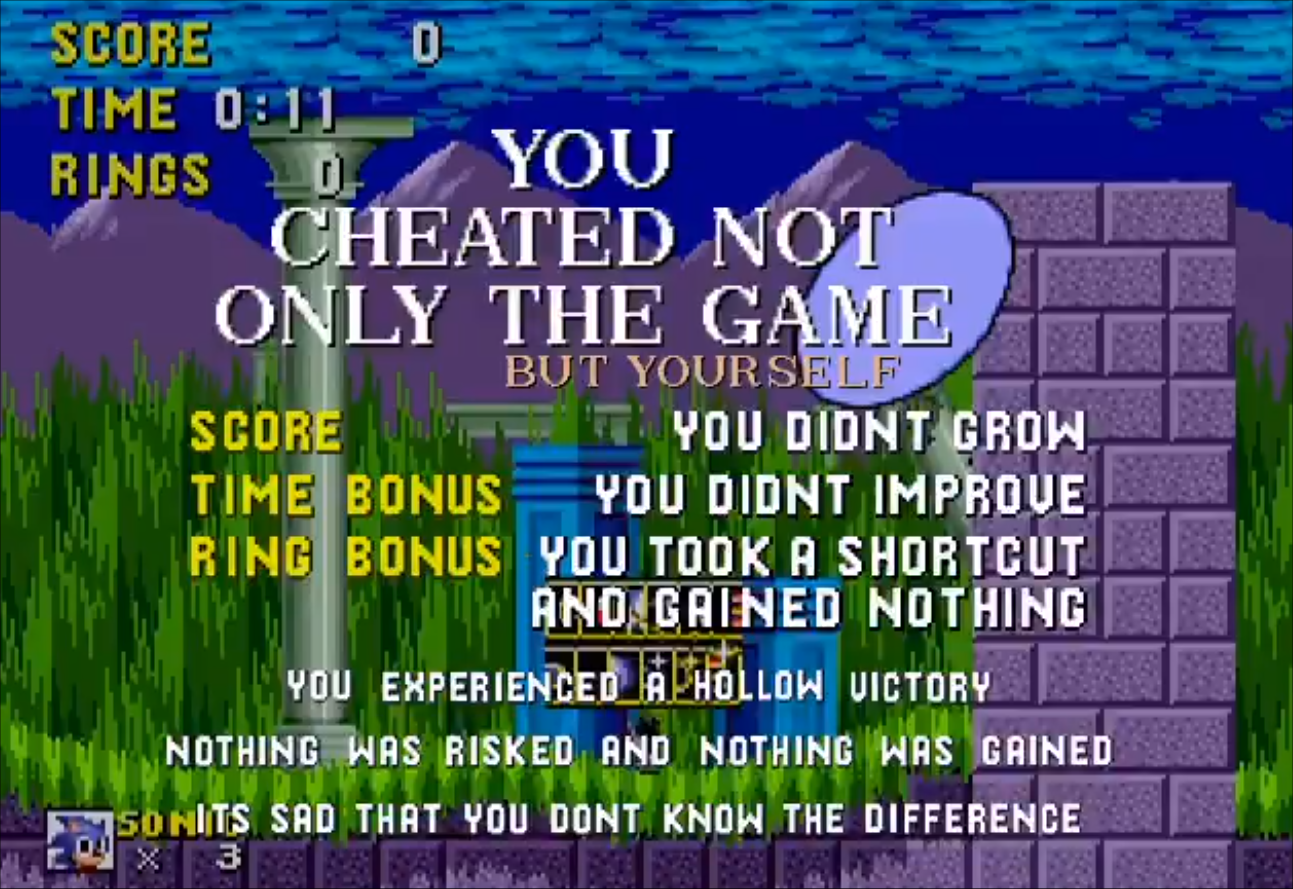 Even I felt the sting way over here, and I’m one of the most honest gamers in the circuit today. I can only imagine what that felt like to the scumbags who get paid to review games for a living but weren’t good enough to beat a game that a quadriplegic managed to conquer within an hour.

But sometimes it’s those burning truths that are required to light a fire under the hairy butt of incompetence, and potentially get the gears of that machine in your chest to start turning so that the light in your heart burn bright and encourage you to seek strength, to get strong, and to stay strong.

Oh, who am I kidding? Game journalists are heartless ghouls and no amount of moral rationalizing will ever convince them to act like responsible human beings.

But for everybody else out there who values a good chuckle at the expense of the skill-inept troglodytes that govern the gaming media industry, the Sonic tweet delivers in spades.

(Thanks for the news tip Spiky Killa and Lyle)