Disney finally dropped the official Star Wars Episode IX: The Rise of Skywalker teaser trailer for the upcoming film during the Star Wars Celebration event. The two minute trailer spends half its time still trying to make Rey look like some super badass Jedi, which could only siphon from some viewers a scoff and a sigh.

The entire first half of the trailer focuses on Rey charging up her Force power and using her lightsaber to cut a moving Tie Advance out of the sky speeding toward her. The rest of the trailer focuses on Rey traveling around to do… things? I don’t really know. They don’t really focus on the villain much in the trailer, and it looks more like some space traveling flick just for the heck of it. Oh, and Billy D. Williams is back for some reason. You can check out the trailer below courtesy of Rapid Trailer.

Near the end of the trailer we see that Rey and Leia hug, so whatever footage they had left of Carrie Fisher appears to be used for her final appearance in the end of this particular and pathetic saga, and in the last few seconds they tease the return of Emperor Palpatine.

I don’t know really understand the Rise of Skywalker subtitle, it doesn’t seem to make any sense compared to what happened in Star Wars: The Last Jedi, unless Luke didn’t really die…? Or is Rey actually related to Luke in some way?

I don’t know, the whole thing is pretty bad and doesn’t make a ton of sense.

There’s a lot of imagery and very little cohesion in the trailer that makes no sense. It’s just stuff that’s there to be there.

Why is Lando back? Why was he using the hyperdrive system?

What is Kylo Ren trying to do?

If the rebels blew up all the major First Order installations, Nu-Death Star, and their capital ship, what are they rebelling for when there’s nothing left?

There was so much bull crap in The Last Jedi that J.J. Abrams has to undo that this trailer left me with more questions than excitement.

In fact, I wasn’t the only one who seemed to be completely disenchanted with the trailer and the upcoming movie, due out this Christmas. 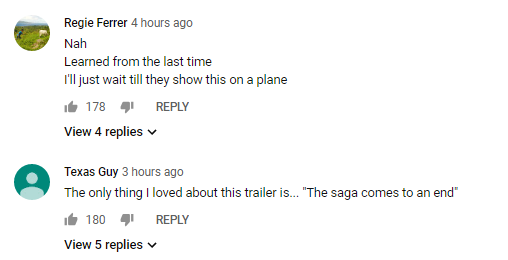 I doubt Abrams will recover what Rian Johnson ruined in the last film, which was already setup for failure based on the mess that Abrams created in the film before that.

Anyway, prepare for embittered fans and corrupt media outlets to do battle this fall as the promotional hype train gets underway leading up to the December release.

(Thanks for the news tip Eric Otness and Salt Miner)