Independent journalist Nick Monroe was permanently suspended from Twitter for “ban evasion”, relating to a previous account he held that was banned back in 2014. Monroe had been using his most recent Twitter account for the last three years, steadily building up a recognizable following and a dedicated audience who latched onto his every tweet, especially as he was breaking news stories or outlining malfeasance across various industries, while infrequently contributing articles to One Angry Gamer.

Monroe detailed his suspension on Gab.com, where he shared an e-mail from Twitter stating that he was permanently banned for evading a permanent suspension. 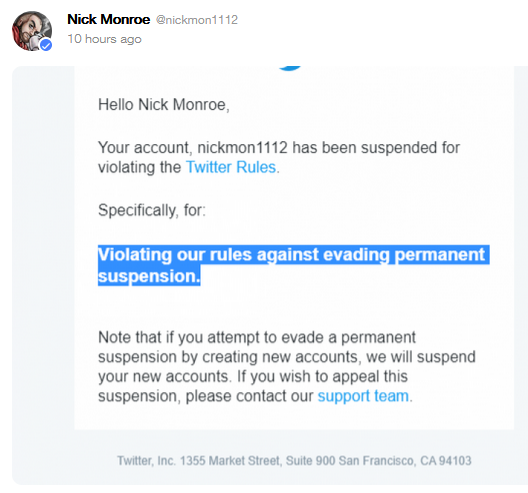 So what was it that Monroe originally did that earned him a permanent suspension? Well, according to his post on Gab, it was related to a tweet he made that involved Randi Harper doxing herself. 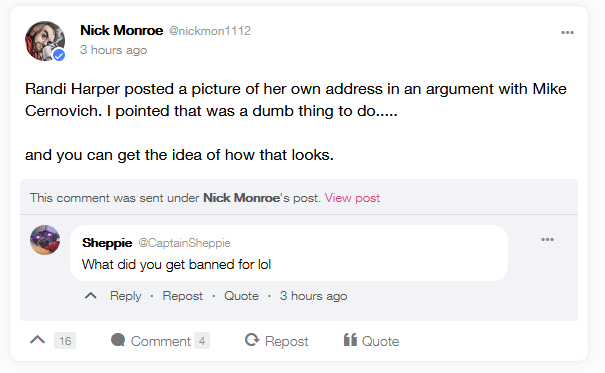 The original account, PressFartToContinue, was banned five years ago in 2014 during the #GamerGate blow-up.

Three and a half years ago Monroe made his most recent account, and had been using it ever since to do actual investigative research and journalism. Funnily enough, it took Twitter years to catch on (likely after being tipped off by opposition researchers) to ban his most recent account for something that took place half a decade ago.

You can check out many of Monroe’s Twitter threads and news coverage that was archived from Twitter via the archive.is link. You can see some of the work he’s put in over the years covering a wide range of different topics.

The irony is that there is no path to redemption on services like Twitter. If they decide to permanently suspend you from their services, you have no way of ever getting back on. As pointed out by Joe Rogan, criminals seem to have more of a path to redeeming themselves than those who get banned from social network services. In the case of Twitter, once you’re permanently banned… it’s forever.

Anyway, Bounding Into Comics reported that not only did Monroe cover controversial political topics but also movies and anime as well. He netted recognition from the annual Kunkel Awards back in 2016, hosted by Michael Koretzsky from the Society of Professional Journalists, and he was at the forefront of outlining the news regarding the Christchurch shooting in New Zealand, which also netted him various content restrictions on his tweets as New Zealand’s government was cracking down and censoring certain kinds of information.

The article also notes that before Monroe was banned he had been chronicling and exposing scientist Ian Brenner’s false attribution of a quote to President Donald Trump. 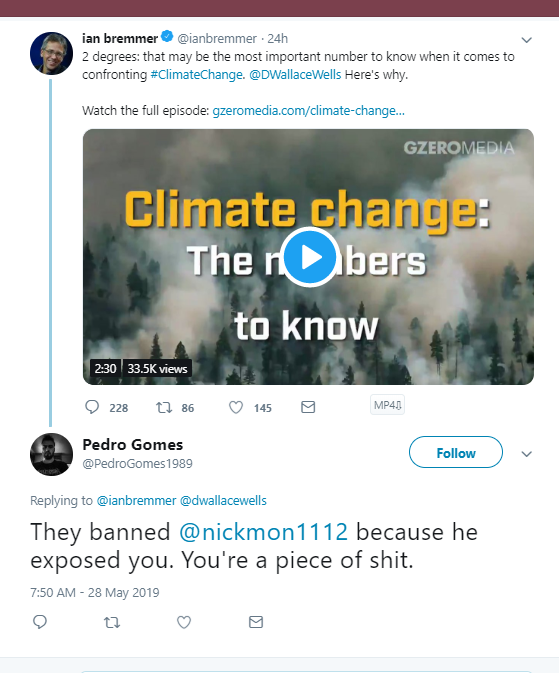 Various Twitter users, including a number of blue checkmarks, came out in support of Monroe after news spread that he had been permanently suspended.

Nick Monroe, who was permanently suspended from Twitter this morning, now has a Telegram channel. You can subscribe here: https://t.co/31VzCEO27m

While Monroe may no longer be on Twitter, he’s still doing what he does best over on Gab.com, as well as producing content over on his blog at NickMonroe.blog.

As depicted in the post above, he’s relatively at peace with how things turned out and is currently saving up to go on vacation for the summer.