Palm Pioneer and Zodiac Interactive’s Tales of the Neon Sea is an indie cyberpunk adventure game that came out on PC at the end of April. For gamers who picked up a digital copy and needed a little help with some of the puzzles and navigation, there’s a gameplay walkthrough available to help you out.

YouTuber wolftooth has a complete series of videos available covering the game from start to finish, and offering solutions to some of the puzzles. You can check out the Tales of the Neon Sea walkthrough below.

The controls for the game is pretty simple. If you’re playing with a gamepad you can use the left analog stick or the digital pad to move around or select options from the menus. You can run by holding down the right bumper, while interacting with objects can be done with the ‘A’ button on the Xbox controller (or ‘X’ on the DualShock), or alternatively you can use the ‘Y’ button to interact with objects (or Triangle on the PS4 DualShock controller). You can open up your inventory using ‘X’ on the Xbox controller or Square on the DualShock.

Alternatively you can use the keyboard and mouse for navigation and interaction purposes.

Once you get done with the settings the game starts with a prologue sequence. You have to keep pressing the ‘A’ button to stand up and then rapidly tap ‘A’ to crank the valve and keep the hallucination at bay. Use the steam pipe by pressing ‘A’ to further waylay the hallucination.

Head to the edge of the waterfall and drop down.

Once the rat is on the blue pipe over the waterfall, shut off all the other levers and then go over and crank the valve wheel to get Rex’s hat back.

Go into the next room and examine the objects. You’ll need to power up the maintenance center to restore rex’s hand and foot. Go to the far left side of the room and get the multi-function screwdriver out of the locker. Head back to the broken robot on the right side of the room and use the tool to acquire the ankle part form the robot.

Exit the maintenance room and the cat will kill one of the electronic arts. You’ll need to capture some cyborg rats with the help of William.

Go over to the robot in the junk pile near the steaming pipes and use the screwdriver on the robot to acquire the wrist device.

Next up you’ll need to take control of William and acquire the Cyborg-rat’s storage pouches.

This is a bit of a mini-game puzzle where you’ll need to sneak up on the cyborg-rats and pounce on them.

You’ll need three pouches. The object is to get around to the back of the rats and pounce on them. You’ll need to remove the fungus by tapping ‘A’ on the context sensitive parts, as well as move the debris out of the way by removing the fungus.

Once you get all three pouches William will return to Rex. Go over to the left and there’s a sealed cable wire you can acquire, which will be required to power up the repair machine.

You’ll need to assign the power conduits from least to greatest in order to get the machine to boot up. The pouches should be arranged as depicted in the image below. 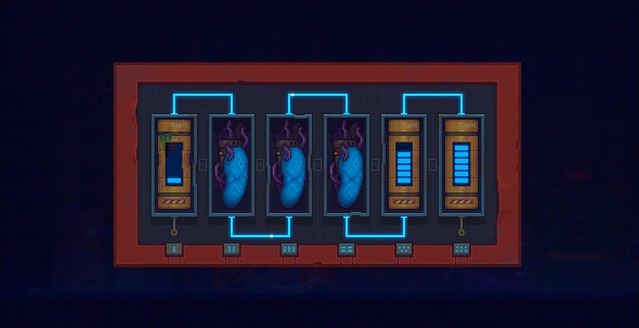 After the intro sequence, head over to the cabinet on the left side of the room and grab Rex’s watch.

You can gather info from the newspaper on the far right side of the room.

Head upstairs and grab the key to the distribution box.

Head downstairs and go over to the circuit box on the left side of the room.

You’ll need to rearrange the circuit box to restore the power in the attic.

The circuits should be arranged as depicted in the image below. 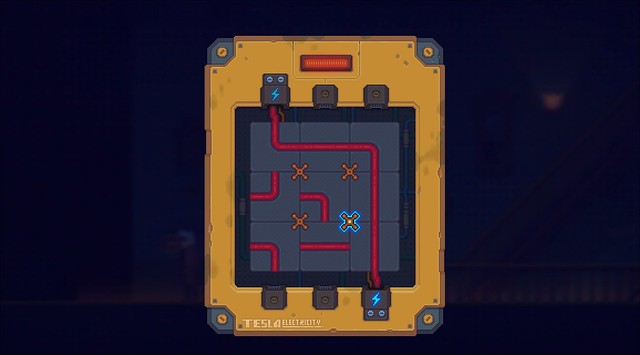 Head back upstairs and check the memo on the floor.

Examine the suit of armor and you’ll note that a cat is stuck inside. You’ll need a claymore to get the cat out. Head back downstairs, go into the room on the left and then enter into the middle door, which will take you into the bathroom. There’s a claymore sword in a display that you can take by rapidly pressing ‘A’.

Go over to the scanner with BB-X and you’ll discover that you’ll need a decoder and a processor in order to fix the machine. Head all the way downstairs into the living room the processor will be located in an “AED” purple box on the top of a book shelf.

Head back upstairs and input the following code into the locker to gain access to the Universal Electronic Dismantler. 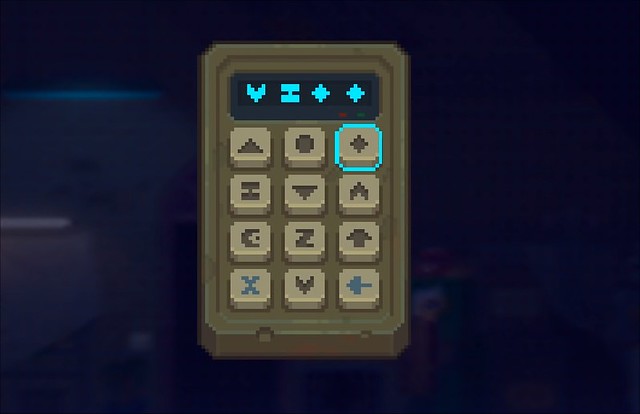 Go downstairs and into the kitchen. Use the dismantler on the washing machine in the corner of the room to get the decoder.

Head back upstairs into the attic and repair BB-X by placing the processor and decoder into the robot.

You’ll need to complete a wave signal puzzle. This involves using the three dials to fine tune each of the three waves to sync up with the blue lines in the background.

It’s not a difficult puzzle. Just ensure that the lines all match up.

It’s all for naught, though. BB-X ends up blowing up and you have to go out and find parts to repair him.

Head into the repair shop and to get a memo file for the shop owner and talk to him about his prices. When you exit the repair shop William will bring a piece of bloody cloth to Rex. William will take off down the street and you’ll need to chase William to an alleyway. 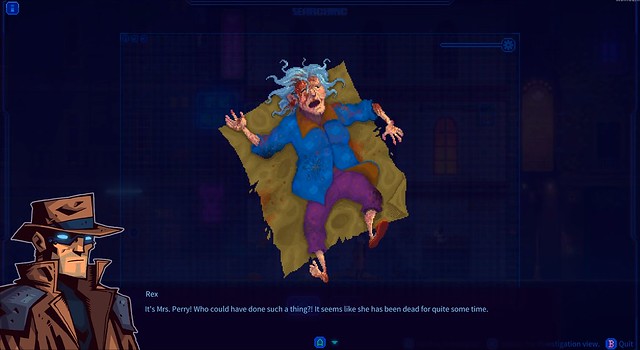 Go over to the bloody wrap and when you examine it you’ll uncover that Mrs. Perry has been murdered.

Here you’ll unlock the ability to enter into the investigation mode.

Examine Mrs. Perry’s heel, the gash on her forehead, and the cloth. Proceed to switch to the UV mode and examine her elbow, legs, and jacket.

Once you gather all the clues, combine them together to complete the investigation sequence.

After completing the sequence, examine the dumpster with the red top and then move it over to uncover the trail of footsteps. Ity will lead to a big cat with a patch over its eye.

Go back over to the other cats and grab the strange smelling cat food and bring it to the big gray cat. It will move out of the way and you’ll be able to examine the dent on the lid. From here you’ll need to complete a gear puzzle within a watch to rewind time and see what happened. The gears need to be arranged as depicted in the image below. 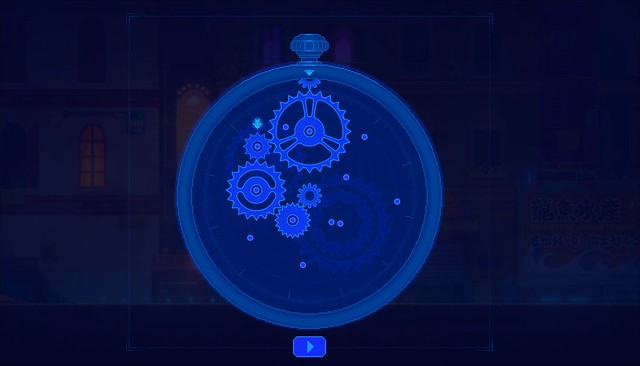 Talk to Royde and Karl, and then proceed to talk to Alice.

Alice will direct you to Mrs. Perry’s flat in the Sophora Apartments.

It’s a little tricky because you have to move the yellow node from the lock entry to the red lock. This requires moving the yellow node all the way to the outside of the rings on the far left side and then rearranging it so that the yellow node can get to the top red exit point.

Inside the apartment, proceed to examine the android butler for clues.

Examine his tie, his feet, his wrist, his soles, his artificial fingers, and his left eye. Switch over to the UV mode and investigate the substance on his left wrist, proceed to combine the clues.

Once you finish up with those clues, head into the next room and examine the cat paintings on the wall.

This will reveal a hidden compartment with a letter inside and an exquisite small key. Use the key to access Mrs. Perry’s diary in the first room.

The code for the digital lock in the kitchen is: 0421

When you finish up the clues you can then use the stopwatch to go back in time. 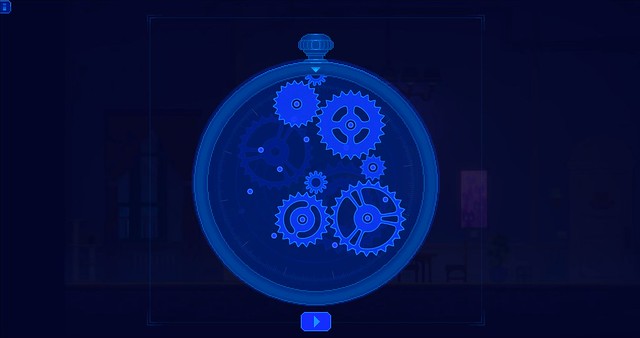 Align the gears so you can see that Jenny smacked Mrs. Perry over the head with the candle stand and then the robot had tossed Mrs. Perry’s body out the window.

Following a conversation with Royde and Karl, Rex will be given permission to to look inside the robot that tossed Mrs. Perry’s body.

You’ll need to detach each of the circuits in sequence, as depicted in the image below. 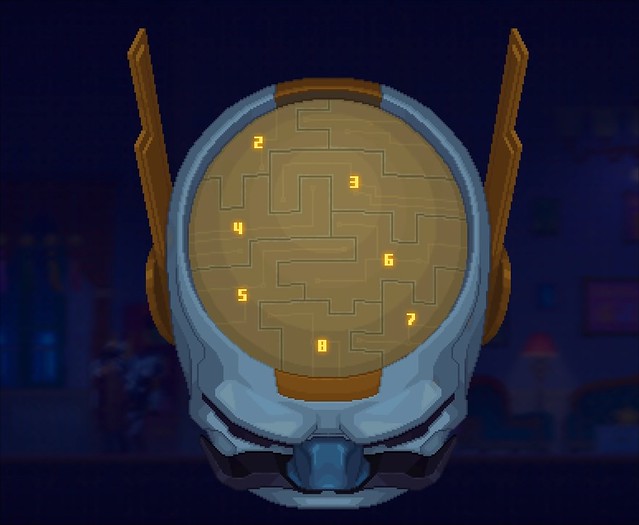 The game will then switch and you’ll need to complete another puzzle platforming segment involving William.

Talk to Elizabeth and then head up top to talk with the other cats.

You’ll need to answer some questions before you can get your hands on Tom’s control stick the answers to the questions are as follows:
1 – An artist
2 – Each cat has their own destiny,
3 – Fitcher family

Use the control stick on the control panel to lower the lift. Jump up and push the bowl over the electrical wires to short them out and then proceed up the otyher side to talk to Falkenburg. Arrange the neon sign so that it’s ordered: Pink, yellow, green. Falkenburg will then allow you up into the apartment to talk to the other cats.

After you talk to Vito, you’ll need to complete a piano challenge from Connie.

Connie will give you a pretty leather ball for completing the challenge.

Use the lift to head back down to the lower level.

Make your way around to the construction site. You’ll need to platform your way down into the window of the small apartment. You’ll find some catnip in the far right hand corner of the map.

Head back up to the upper platforms and flip the lever, and then jump across to the platform with the sleeping construction worker to grab the tinfoil unicorn.

Head down to the tarp and remove it to find Paulie. Use the tinfoil unicorn to test if Paulie is a biocat.

Head inside the apartment where the other cats are and use the ball to get the one cat away from the burning dumpster. Stand over the dumpster and bake the catnip, then proceed to go over to the refrigerator and give the captnip to Tessio.

Head back to Vito’s room and use the tinfoil on Bradsey. Once you complete the mission tell Marti nabout it.

Exit and go talk to Spike. He will grant you access to the rooftop where the biocats are facing off against a dog. 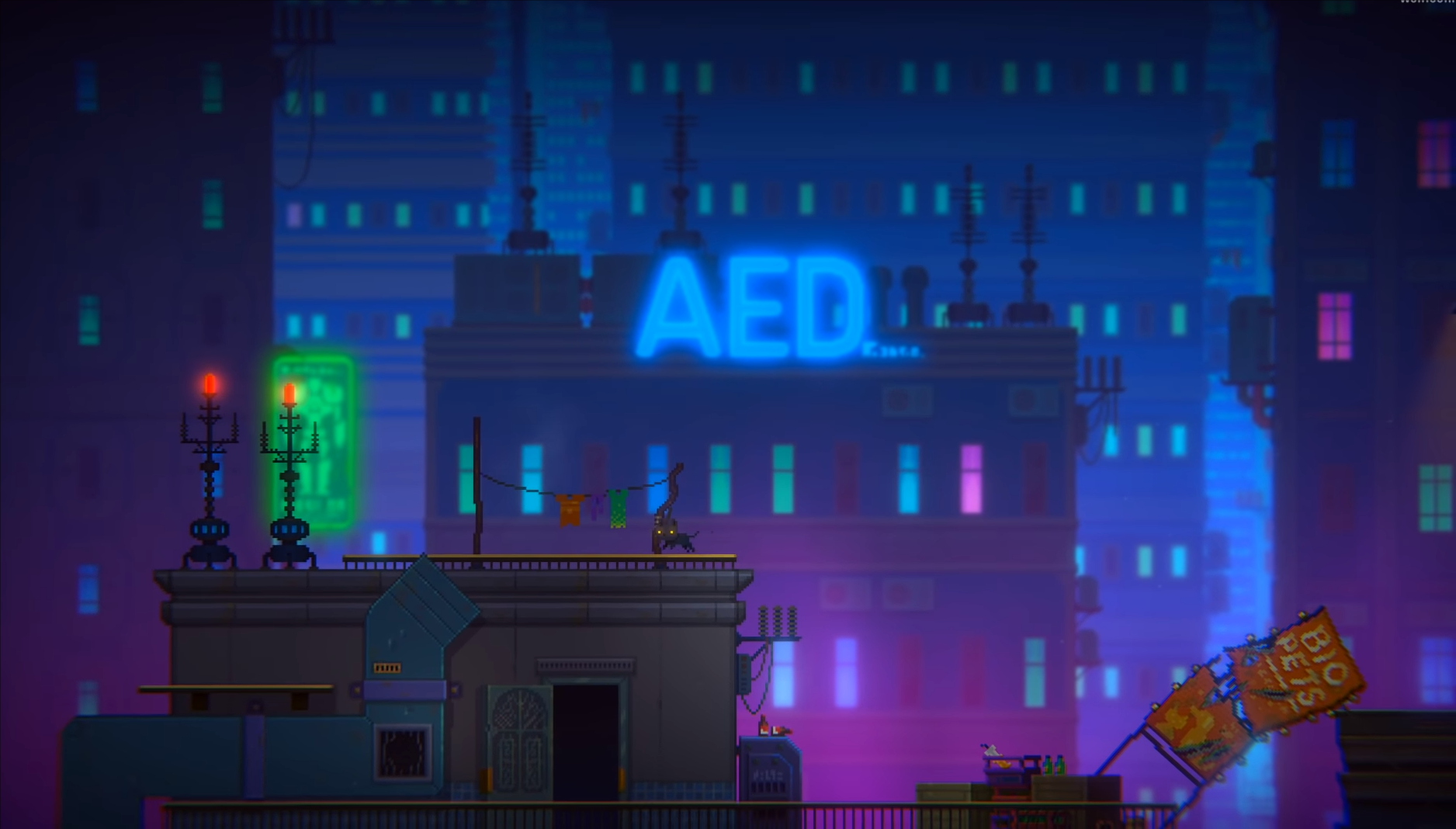 Jump up onto the rooftop of the entry and swipe the cord to cause the sign to fall over and the dog to chase away the biocats.

You’ll be able to recover the bloody candlestick finally.

After retrieving the candlestick you’ll go back to playing Rex.

Go to the taxi stop and call for the taxi to take you to the bar.

Head over to the bar counter and talk to Royde.

In the far left corner of the bar there’s an information peddler, but he won’t give you any info until you beat him at a game of blackjack.

Mr. Know-All will give you some info about the Revolutionist if you beat him at the game..

You can also talk to the robot in the bathroom to hear about his issues.

Once you get done talking with people and exploring the bar, you can end the night by talking to Royde and choosing to confirm drinking the night away. This will complete Chapter 1 and begin Chapter 2.