Carrion Lets You Play As An Eldritch Horror Come June 1, 2020

Devolver Digital and Phobia Game Studio’s Carrion has been a long time in the making. Last year we had a gameplay trailer revealing some of the general mechanics for Phobia’s upcoming project, but this year we found out that the release date for the game is set for June 1st, 2020.

The game is billed as a reverse-horror game, because instead of taking on the role of a struggling survivor, a badass marine, or a lone scientist trying to put a Lovecraftian nightmare back into a bottle, you are the nightmare. You are the terror. You are the horror.

It’s an awesome concept that’s long overdue, and Phobia Game Studio accurately manages to capture a rather disturbing look at a carrion mutagen that breaks free in a lab and begins to consume, absorb, eat, and coagulate the humans attempting to get away. The real highlight of Carrion isn’t just in its concept, but how it’s brought to life. Obviously this is something where the limitations of words just can’t do the visual concepts any justice, which is why you need to check out the trailer below to see the side-scrolling horror title in action.

I was blown away by how well Phobia managed to capture the physics of the carrion. That’s where the game really shines, with the carrion dynamically latching onto objects and walls to move around the environment. This is something we don’t even see from AAA studios.

Now keep in mind that it’s not like you can just create a basic walking or running animation for this creature of viscera because it has no limbs and its extension varies based on its position. So the engineers had to make it where the pixels for the carrion stretch to the location that the player is trying to move in and then has some connective slack so that it droops and hangs in between where the carrier is and where the appendage has connected to a surface. It’s disturbingly fascinating. 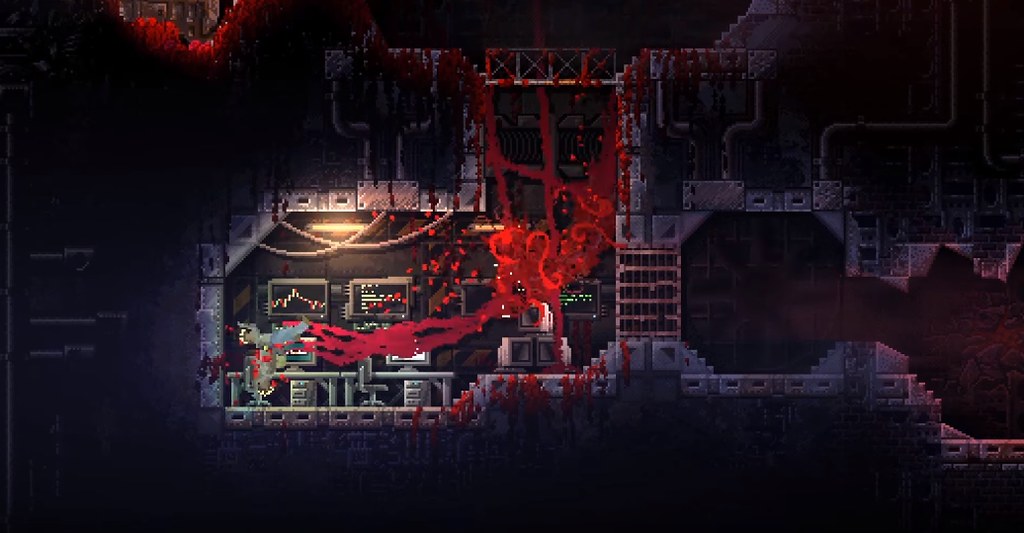 So it’s a lot like a mix of The Thing meets Aliens. You start off as a small blob and slowly metastasize by absorbing more organic matter (namely humans). As you grow in size you can then establish nests, and become a viral strain by spreading throughout the environment like some kind of meat-fungus.

As you progress through the game and grow your carrion, it becomes a mammoth, slug-like monster with spikes, tentacles, and chompers the likes of which would make Jaws think twice about messing with the pulsating acne-worm.

You’ll be able to terrorize and unleash all sorts of horrific, eldritch-approved carnage come June 1st, 2020 on Steam for PC. You can wishlist the game right now over on the Steam store or learn more about the upcoming side-scrolling horror game.