There have been two interesting stories related to the FBI and 8chan. In one story the FBI visited an 8chan user and they wanted him to help them identify other forensics involving 8chan users after he posted in a thread about the New Zealand, Shooting. Another story revealed that many times the FBI posts honeypots and bait on 8chan to gather intel on users, or fabricate the implication of wrong doing, as evident in the affidavit.

The first tidbit involves a user on 8chan who was contacted by the FBI who wanted him to help them with information gathering on other users and behaviors surrounding the Christchurch, New Zealand shooting.

The video was uploaded on YouTube on June 16th, 2019, but I doubt it will stay up for long.

Of course, if the video does manage to get taken down there’s an a backup available over on Bitchute.com.

The more damning story for the FBI, however, is that they have been found lurking on 8chan. The thing is, they gave themselves away.

8chan users have been taking a thorough look through the affidavit that was filed on April 29th, 2019 in relation to the San Diego shooting that took place back on April 28th, 2019 after it was made public via Zero Hedge on June 16th, 2019.

In the documents it was revealed that various 8chan threads were used as “evidence of a crime”. The only problem is that some of the documents submitted for evidence show that the “users” that were supposedly engaging in suspect behavior were also FBI agents. While logged in, when you take screenshots of an imageboard on the chans it shows which ID belongs to you by placing a “You” next to the ID. This shows up occasionally in the evidence submitted in the affidavit by FBI Spcial Agent Michael J. Rod.

Going through the 8chan affidavit. Not only did they print out and then re-scan screenshots of the /pol/ thread, but there are several (You)s in the thread. God, our intelligence community has never been more incompetent. pic.twitter.com/wbdcr5hxfB

You can view the larger image below, connecting the FBI’s user ID in the affidavit with the one from the actual 8chan threads, so you can view the comments they were making about the shooter shortly after the shooting took place. 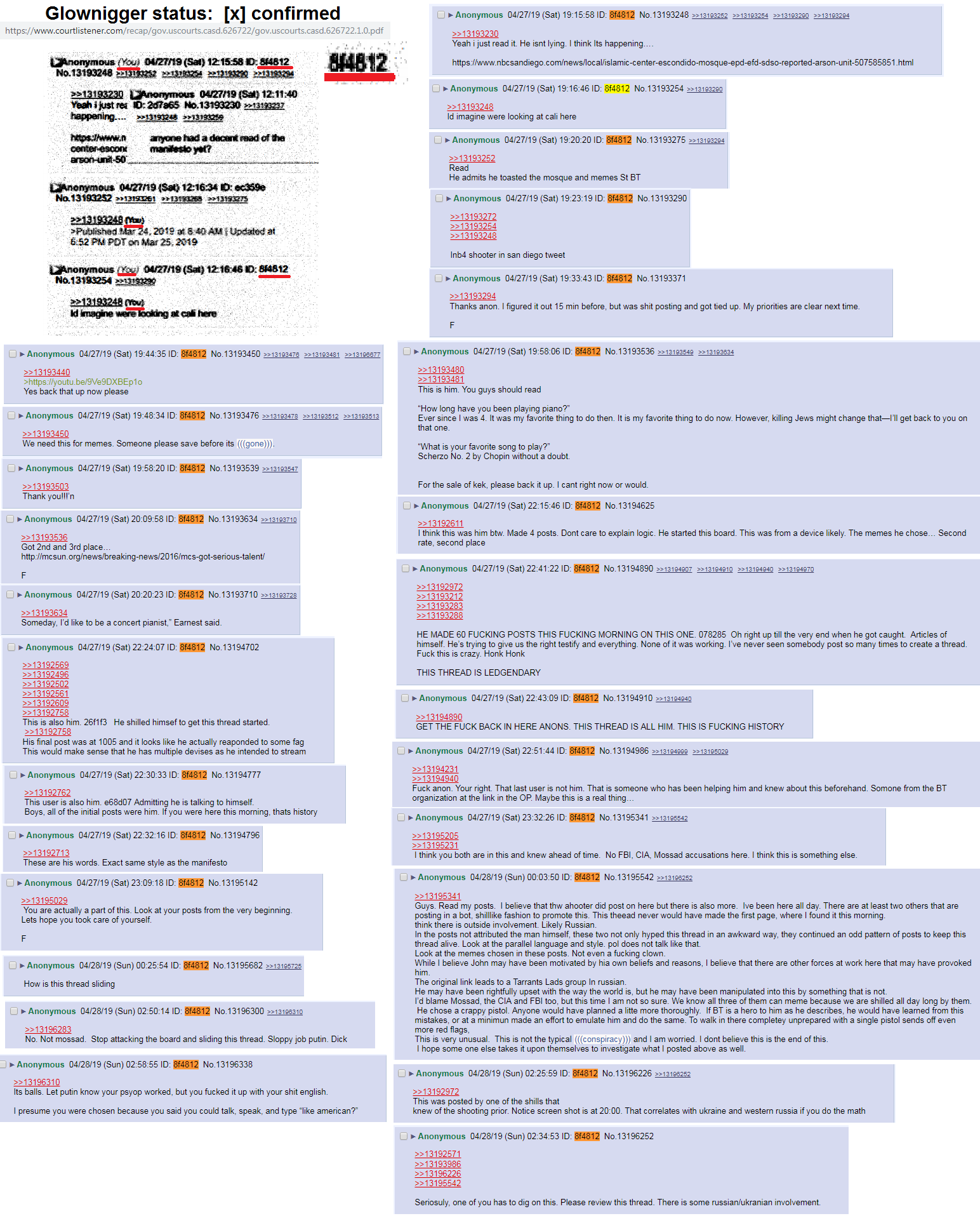 They were basically trying to bait users into posting incriminating comments. We oftentimes call this “Fedposting”.

The idea is that users either make the error of posting something that veers into speech that incites violence, which is typically against the law, or they end up posting some kind of information that links them to the crime.

Feds are usually lurking the chans in order to find something they can use in cases like the one above in order to frame a certain situation in a certain way.

As noted in the Zero Hedge report, the original post that was allegedly made by the Poway shooter was taken down nine minutes after its creation. So it barely had time to fester a lot of attention. Even still, the FBI wanted a boogeyman out of the situation and when one doesn’t readily present itself they took it upon themselves to help shape one into existence.

(Thanks for the news tip Ace)