The news comes courtesy of a tweet that Project Veritas’ head James O’Keefe shared on June 26th, 2019 confirming that Vimeo is part of the censorship brigade. 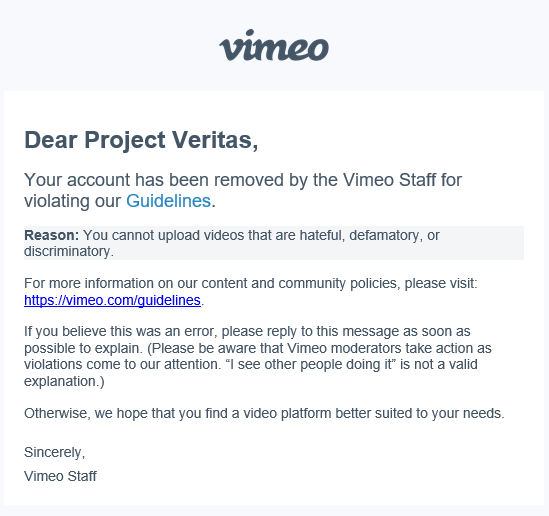 Basically at this point, Project Veritas now only has their version of the video hosted on Bitchute.com.

You can view the original insider video and whistleblower testimony, complete with documents, via the video below.

What we’re seeing here is big tech moving in to censor as much of this content as possible since it exposes Google as acting as a publisher, censoring, suppressing, and removing content to accommodate the political sensibilities of its staff.

Congressman Gohmert also chastised Google for this censorship power play, stating that they need to have their immunity from the section 230 Communications Decency Act stripped, and sued into oblivion via class action lawsuits.

Whether or not anything will actually come of this remains to be seen, but Congress has grilled some Google representatives, but not to much avail, as they mostly stonewalled the answers and ignored the seriousness of the situation.

What really needs to happen is charges of treason and election meddling need to be brought against Google and serious sanctions handed down against them in addition to breaking up the company and removing their immunity. But the government seems slow in acting, and with the 2020 elections on the horizon they don’t have much time to stop Google from enacting their plan to prevent President Donald Trump from being re-elected.