Nintendo and Platinum Games released a new trailer for Astral Chain, featuring nine minutes of gameplay for the upcoming third-person, hack-and-slash, action-shooter title. This is one of the longest promotional pieces we’ve seen of the game so far leading up to its release, and it gives you a solid idea of what to expect from the new IP for Nintendo’s little hybrid that could.

The new video basically outlines the plot of the game, which centers around Chimeras attacking humans, corrupting them and turning them into monsters. A bastion and safe haven from the Chimeras called the Ark was constructed, which works as a city safeguard against the onslaught. However, the Ark has come under attack and now the last line of defense for humanity is an elite police force working under the organization, Neuron.

Players will take on the role of these enforcers and their astral allies as they fight against the corruption and attempt to defeat the Chimeras. You can check out the nine minute video below, which outlines the basic controls and mechanics of Astral Chain.

You have a basic baton that can perform melee attacks at close range, and a projectile pistol that you can use at long range using the shoulder buttons.

During battle, if the baton or the pistol isn’t doing enough damage, then you can summon your Legion, which is the astral ally to help you in the fight against the Chimera.

There are different types of Legions you can summon, such as the sword Legion, which will need to get close and dish out melee damage to enemies.

You can command your Legion using the ‘A’ button on the right JoyCon.

You can perform special Legion attacks using the ‘X’ and ‘Y’ button while commanding the Legion, which can either stun or incapacitate an enemy long enough to dish out extra damage.

Alternatively, tapping the ‘X’ button on the right JoyCon will consume the selected item from your inventory.

While in combat you can perform chain counters by dodging an enemy attack and timing it just right to counter-attack, enabling the ability to do extra knockdown damage.

Sync attacks can be performed by pressing the attack button while a blue flash occurs on screen. This will indicate that your character and the Legion can perform a sync-up combo attack on the highlighted enemy. 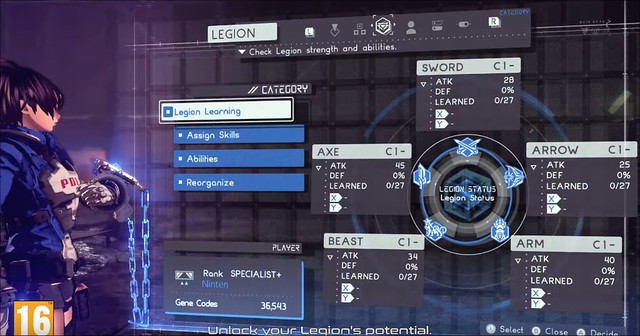 You can perform chain sync attacks by successfully attacking when the blue flash occurs, and continually attacking every time the blue flash reoccurs. These attacks can also be performed while dodging. If you see the flash, quickly attack along with your Legion to perform a synced up combo on the targeted enemy.

You’ll have to act fast, though, because Legions can only stay on the screen for a limited amount of time. After that they will disappear when the gauge runs out. You’ll have to wait until the gauge refills to summon them again.

You can actually switch between the five different types during battle by tapping the ‘Y’ button on the right JoyCon. This will bring up a radial menu that will allow you to summon a new Legion. So long as you have meter left on the gauge, you can continually swap between the different Legion types.

Each Legion has its own special ability, with the Sword Legion being able to perform devastating melee attacks, the Arrow Legion being able to perform long range attacks with pinpoint accuracy, the Arm Legion has the ability to be worn like armor to raise your defenses, the Beast Legion allows you to ride on top of it to get around the battle arena quickly, and the Axe Legion can create a portable energy shield to protect against all incoming projectile attacks.

As mentioned in the video, each of these special abilities can be used both in battle and outside of battle to traverse the environment, solve puzzles, or activate certain interactive entities.

As you progress through the game you’ll unlock points you can use to increase your Legion’s abilities. This includes both offensive and defensive abilities. Each Legion can also be upgraded individually based on your play-style.

Separate from the combat is the game’s investigation system, where you’ll go around town helping out NPCs with quests. You can use each of the Legion’s abilities to help aid you in the quests as well, such as eavesdropping on suspects, using them to open doors or break through barriers, and of course to dispatch foes when the inevitable combat sequences appear.

It doesn’t look like a groundbreaking game, but it seems thoroughly Japanese and is definitely the sort of title you would probably want to check out if you’re a fan of Platinum Games.