One of the games that slipped by a lot of people’s radar during the mid-to-late half of June was Bigmoon Entertainment’s 3D sandbox sim called Police Simulator: Patrol Duty. The game is basically a fully-fledged sim version of the LCCPD conversion mod for Grand Theft Auto, giving players unprecedented realism in terms of following police procedure and attempting to play by the rules while solving crimes and keeping the peace. However, if you have that itching inclination to break the mold and screw the system, there are some cheats to help you achieve such an accomplishment.

The first cheat trainer available for download comes in both free and premium forms over on MegaDev.info.

The cheats are your standard type to help you get out of a tough bind, or allow you to manipulate the playing field by not being penalized for improper conduct. The god mode means you won’t die when you incur any sort of damage, while the score will ensure you’re always winning, and the infinite conduct meter means that any time you mess up, step out of line, or behave indecently, you won’t be penalized for it. It’s a neat little way to exploit the system and have some fun within the city-wide sandbox.

There’s a second cheat trainer available for download but it’s a premium trainer. You can get your hands on it at Cheat Happens.

The Police Simulator: Patrol Duty cheats are listed below:

It’s many of the same cheats featured above, just with a focus more on the mission timers, so you don’t have to worry about completing certain missions within a specified time. 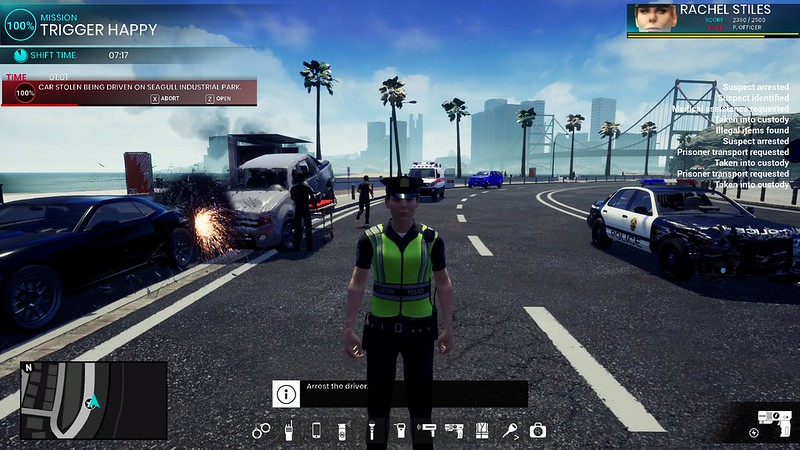 This means that it should give you leeway to complete missions according your pace and not the game’s pace.

The Unreal Engine 4-powered title features a day-to-day simulation experience of a police officer, where players will write up reports, track down criminals, make arrests, traffic stops, or go on high speed chases.

You will need to use real police equipment, such as handcuffs, radios, radar guns, and pistols, as well as go on missions with a buddy in the two-player cooperative mode.

The game hasn’t received the best of user reviews, though, due to the fact that there are a ton of bugs prohibiting users from advancing in the game. Maybe it should have released in Early Access first?