There’s a free-to-download fan-made beat-’em-up that combines all of the classic sprite-based Teenage Mutant Ninja Turtles games from the arcade and home consoles, and puts them into one mammoth game that is sure to delight true fans of the property craving a classically made game for today’s generation.

The title originally released on June 13th, 2019 during the middle of a very hectic E3, but it was also recently updated on July 2nd, 2019, offering the latest content patch optimizations.

The core game features 60 playable characters across the comic books, cartoons, and video games, along with 17 main stages, four extra bonus stages, and sounds and clips from the TV show. You can check out the launch trailer below.

The best part about it? The game supports four-player local cooperative action, so you and three of your buddies, friends, family members, or even rivals can hop into the game and rekindle some 1990s nostalgia… today!

The game features lots of different characters from the NES titles who are playable for the first time only in this fan-made game, and it also includes a variety of different operable vehicles as well.

You might want to download this as quickly as possible because fan-made titles like this have a tendency of disappearing overnight due to DMCA claims from the original rights holders. 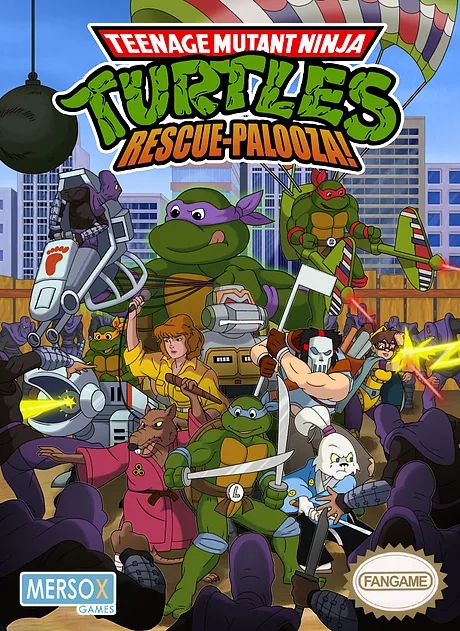 It’s a real shame, too, because fan-games oftentimes provide gamers with the sort of gameplay experiences that they crave but no longer get from AAA outings.

If the rights holders were smart they would have made a game like this ages ago for home consoles and PC, but sadly they aren’t smart and that means the only way to get games like this is from the community.

Anyway, you can grab the game right now from the GameJolt download page.

Teenage Mutant Ninja Turtles: Rescue-Palooza! is only 158MB in size, so you won’t have to scrape together hard drive space to make room for the sprite-based beat-’em-up.

(Thanks for the news tip Bitterbear)