Bitchute hired Nick Monroe to operate their NewsChute account on Twitter, which covered topical content related to censorship and politics. Monroe, who also contributes to One Angry Gamer, was previously perma-banned from Twitter for “ban evasion” because they had banned another account five years ago. Well, now they’re showing that you can’t even operate secondary accounts belonging to companies because it’s verboten.

This move by @Twitter is a clear example of biased enforcement of the TOS. The last time that they denied a viable website their digital presence was when they banned the official Infowars account because of it’s owner Alex Jones.

They have not done so to @HillReporter 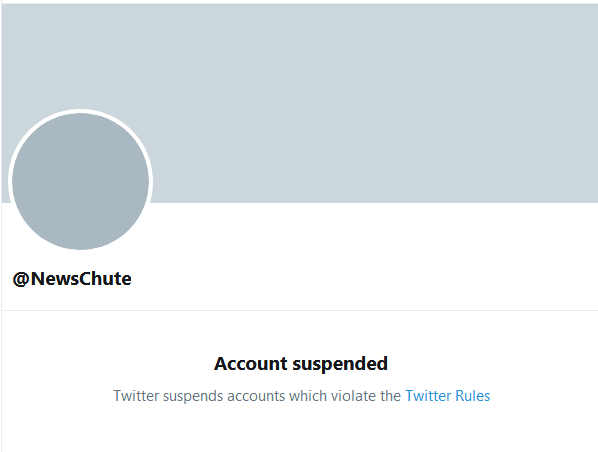 As some of the comments pointed out in the thread, Twitter won’t even allow people to operate other accounts if they’ve been banned previously. However, this only applies in certain cases. Because it’s true that the Krassenstein brothers were banned from Twitter, but the Hill Reporter account is still active.

In this case, Monroe was originally banned five years ago. He made another account years later and found himself permanently banned again because Twitter claimed he evaded the ban that was administered to his account five years ago. In other words, he wasn’t banned for violating the rules but for not staying banned from Twitter’s platform.

When asked if they would be appealing the suspension, Bitchute noted…

“We are in the middle of an appeal. Right after we learned our news account was suspended we launched an appeal. Twitter’s reply said it can take a few days and sometimes longer.

“We’re convinced that there is nothing in Twitter’s rules that would require us to screen anyone we engage to help us with social media based on their social media history. If there is an unwritten rule then it isn’t being applied to the Krassenstein brothers whose website is still present on Twitter with a substantial following. Also they need to clarify at what level of involvement this rule applies, i.e. is any relationship to the company enough? Is it specific to working on Tweets, does that include advising? Is it limited to pushing the send button?”

If you check Twitter’s terms of service or code of conduct, there’s nothing in there saying that companies can’t hire or use people who were previously banned from utilizing their account in any capacity.

Pundit Joe Rogan once stated that social media services need some kind of road to redemption; that it was seeming implausible that murderers have more leeway to integrate and make it back into society before people are given a second chance at Twitter.

Of course, Twitter used the opportunity to ban Monroe because he was keen on digging into the weeds and getting to the bottom of stories where the facts were either misplaced or ignored by mainstream media.

Now, Monroe has to rely on getting the news out via his Gab account and occasionally contributing where he sees fit.