GameMill announced that Zombieland: Double Tap – Road Trip is set to get a video game tie-in for PC and mobile devices. The game is currently being developed by High Voltage Software and will be released on the PS4, Xbox One, Nintendo Switch and PC on October 15th, 2019.

The game will arrive just days before the sequel to the 2009 outing hits theaters on October 18th. The twin-stick shooter will see up to four-players working together in a cooperative experience where you’ll need to work together while playing as Tallahassee, Columbus, Wichita, and Little Rock.

I’m almost willing to bet absolutely no one will want to play as the whiny piece of crap, Columbus.

Anyway, the game is pretty much a reskin of The Expendables 2, which was a cheap but serviceable action tie-in game for the movie. 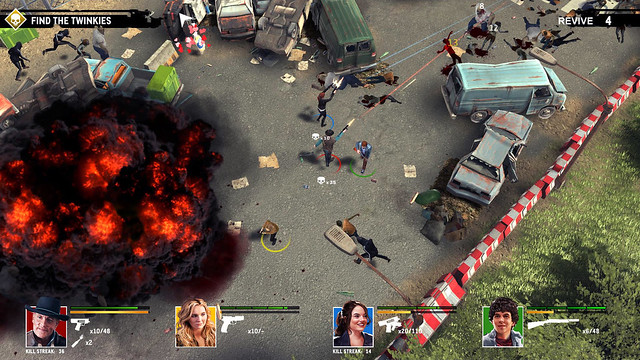 You’ll move through linear, 3D isometric levels, shooting down zombies and racking up kill streaks along the way.

The gameplay seems similar to other zombie shooters like Red Nation, where you have a variety of different weapons you can acquire and different zombies you can face off against while traveling around the game world and clearing out specific locations of enemy infestations.

You’ll have to face off against standard zombies, special zombies, and boss zombies, and you’ll have three modes to play through, including the campaign mode, the horde mode, and the daily and weekly challenges mode.

Unfortunately a gameplay trailer wasn’t included with the news but I’m sure one will drop soon leading up to the release of the game in October.

I doubt the game will do anything to change trends or push boundaries, but much like The Expendables 2, which came out close to a decade ago, it’s likely one of those games you play just to have a bit of fun with friends and maybe knock back a few beers while you do so.