In a new video rolled out by CD Projekt Red, they finally showcased what the character creation suite looks like, and it’s not all that impressive. It was part of a 14 minute showcase of a mission and how you can tackle it in different ways, but we also saw how you develop a backstory, what the actual body options are, what the facial options are like, how the clothing customization works, and how the attributes and perk system is setup.

So first and foremost, you start off by selecting your character’s backstory, which includes three archetypes: Nomad, Street Kid, and Corporate. You’ll be able to choose what led ‘V’ to Night City, and their general motivation. This will determine what sort of dialogue options will be available to you throughout the game.

Overall, though, the character creator is sparse.

All those idiots saying that “It’s just like Saints Row 2!” are ignorant nitwits. The character creation only allows you to choose between a male and female body types, but there doesn’t appear to be any body sliders. They removed the “male” and “female” designations, even though you still only select between male and female body types. Here’s how the body options look: 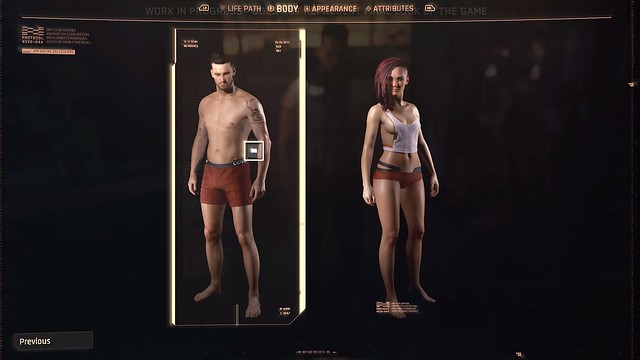 So everybody out there saying that you can modify this or change that as if it’s some kind of WWE 2K CAW editor, are lying. Those features don’t exist based on what’s been showcased. Hopefully you can at least modify how muscular your character looks because based on the old 2018 demo the previous male ‘V’ was a lot more ripped than the soy-infused one they’ve showcased in the most recent video.

Once you get done selecting from one of two body types you then can edit ‘V’s face, which is limited to a couple of sliders, six different skin tones, several eye types, seven eye colors, and a handful of hairstyles. 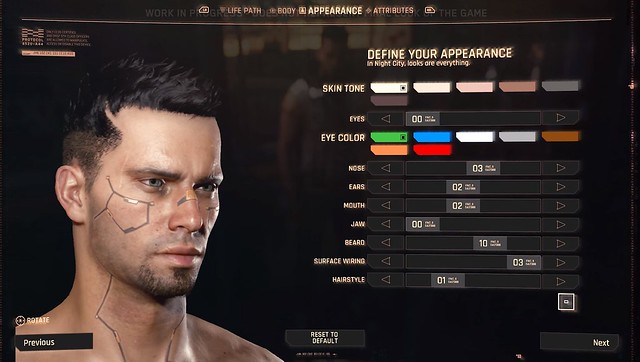 You can also modify your character’s tattoos, makeup, piercings, bodily scars, skin mods, and eye mods. They didn’t showcase those specific features in the latest trailer, but they showed them off before in the old 2018 demo and talked about them recently in interviews. 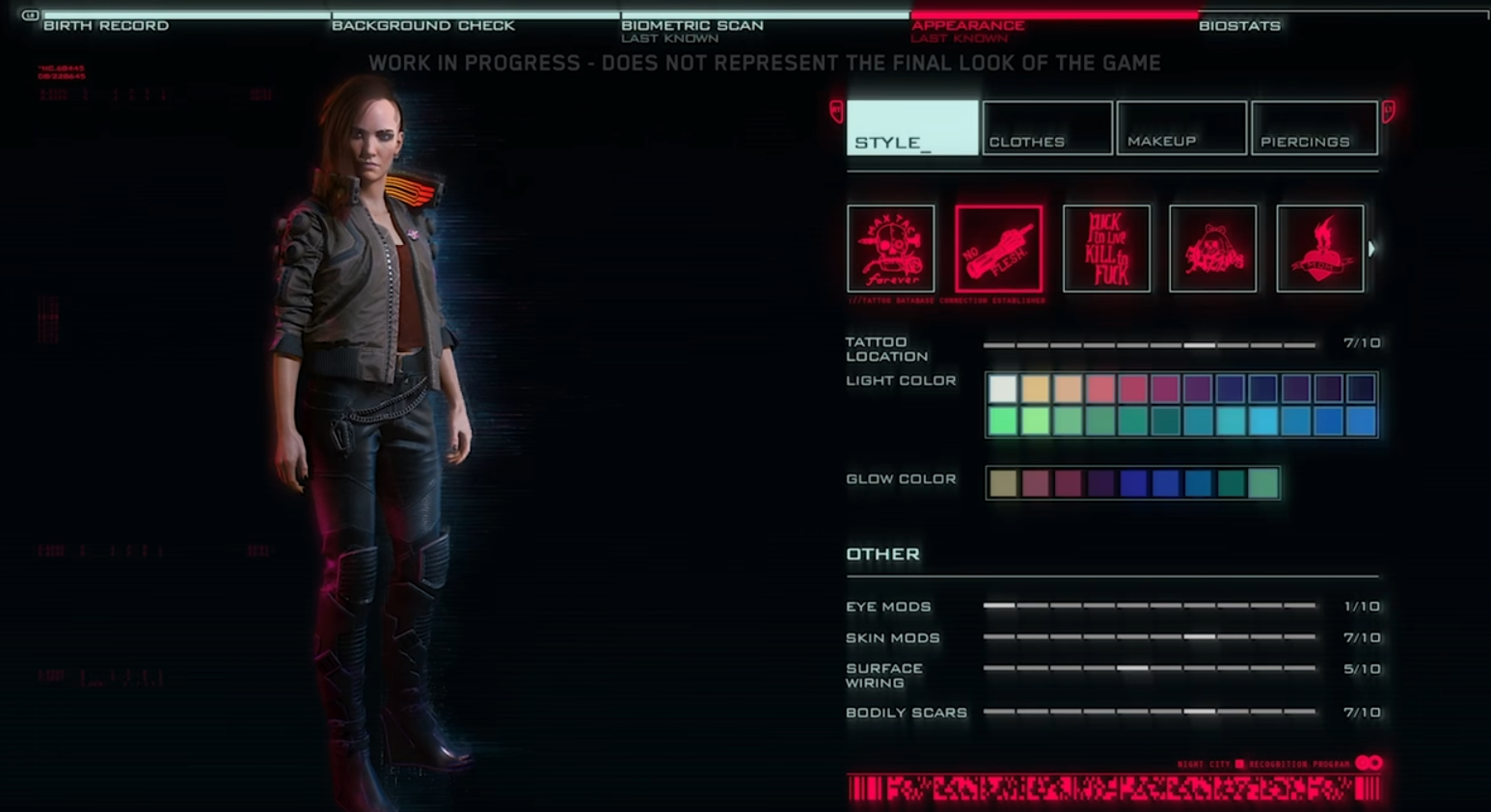 When you get done selecting your face, you can then modify your starting attributes for the character. This includes points for your Body, Intelligence, Reflexes, Technical, and Cool categories.

I don’t know what “Cool” means, but I’m guessing that affects your charisma? 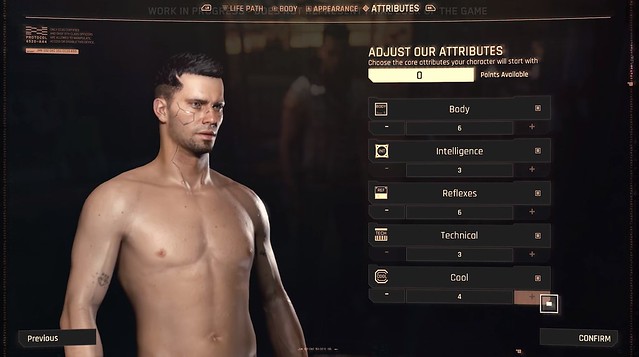 Beyond the starting attributes you’ll also be able to modify your character perks by unlocking both attribute points and perk points. The attributes can be used to increase the base stats, while the perks will unlock proficiencies for categorical talents such as Handguns, Rifles, Blades, Assassination, Nerve, Sniper Rifles, Engineering, Hacking, Melee, Shotguns, Two-Handed weapons, and Athletics.

Different perk talents are attached to different attribute categories, so if you upgrade the Body attribute you’ll be able to upgrade the talents within that category. 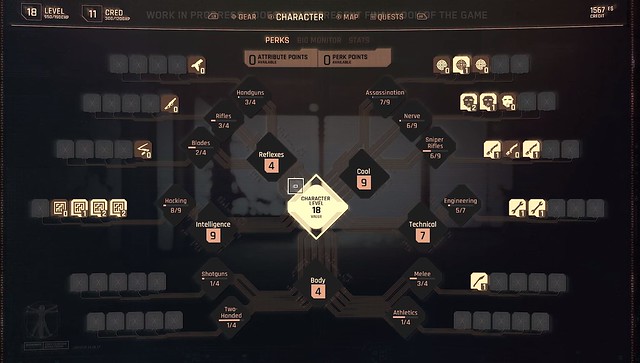 In the actual game you’ll have access to some visual customizations for your character, which includes hats and facial wear, a shirt, a jacket, pants, and shoes.

You can equip biochips and equip up to three weapons.

Since you can modify the clothes you wear, the body types are fixed for the characters. So just to reiterate, this is not like Saints Row’s or Black Desert Online’s character creation suite. 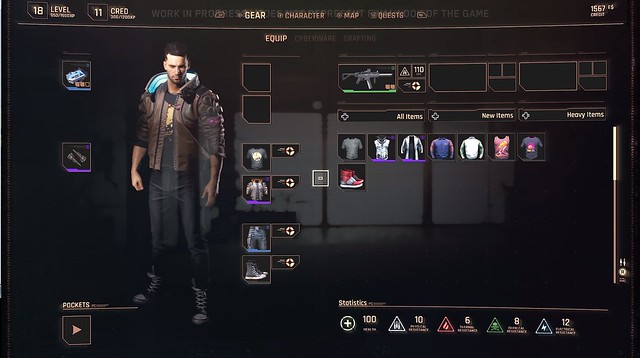 Now according to Video Games Chronicle, CD Projekt Red concept artist and spokesperson Marthe Jonkers told them that the options they added are a lot more robust than what they had in the 2018 demo.

“I can probably compare it more with last year’s E3 [2018], after which we massively expanded the character creation options and added a lot more stuff, which was a response to that,”

“We just listened to what people wanted, how they thought we could improve… we really expanded that, which I think is really exciting. You can actually make your own character now; you can change your body type, you can pick a voice you like, you can make all kinds of combinations.”

What isn’t clarified is what options they supposedly added.

Based on the new video it looks like there are fewer options for the eye colors compared to the old 2018 demo. 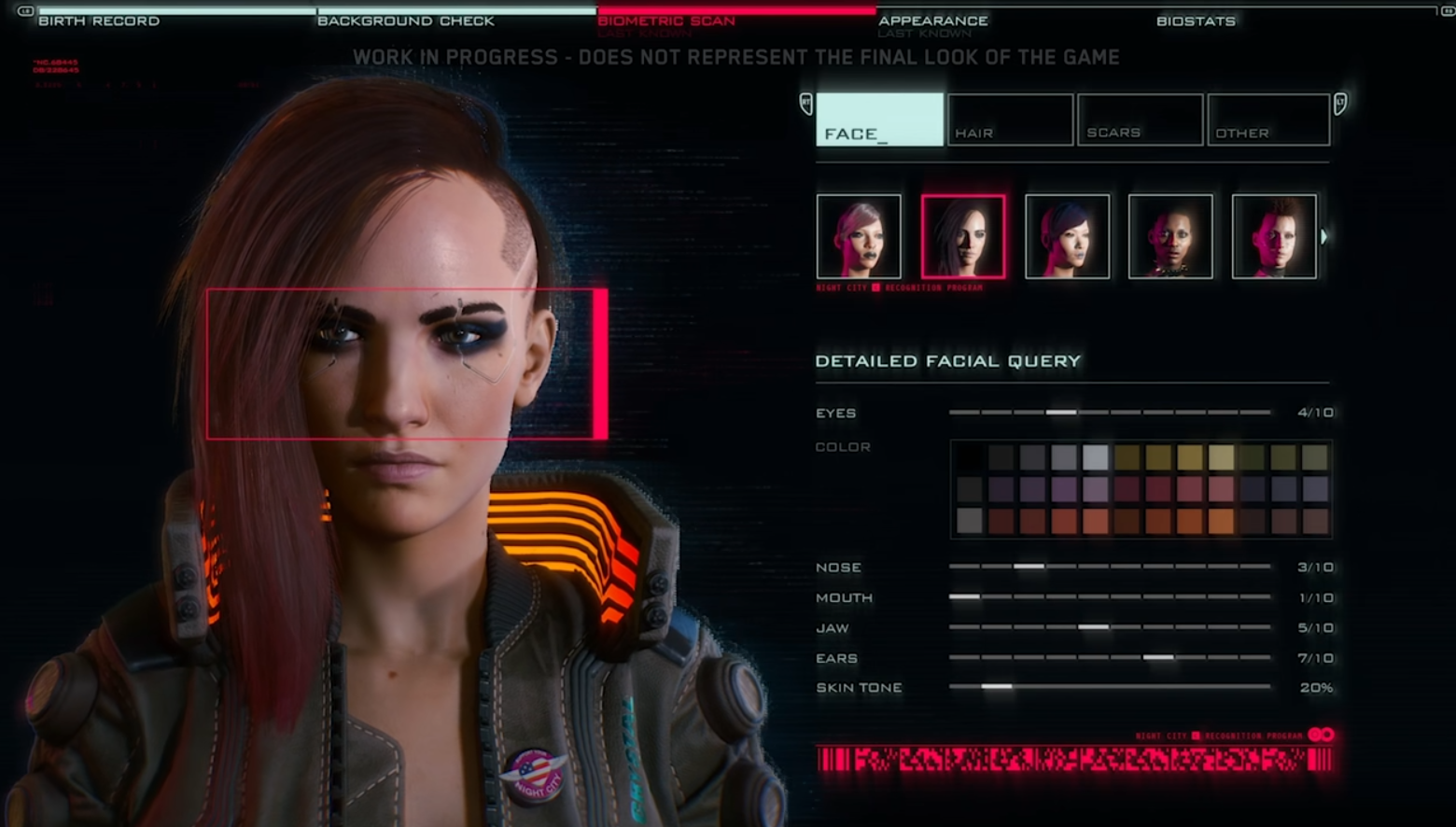 Then again maybe Jonkers was talking about clothing options and other customization features? It’s hard to tell since the comment was exceptionally vague.

Either way, people talking about being able to create this character or that freak are blowing things way out of proportion. This is a fairly bare bones character creation suite, and rightfully so since it’s in first-person and you won’t be seeing ‘V’ much in the game anyway. If you were expecting Skyrim levels of modification and tweaking then you’re barking up the wrong tree.