NetherRealm Studios and Warner Bros. Entertainment released a new trailer for the DLC Kombat Pack for Mortal Kombat 11, covering the three characters we knew were coming as well as the additional characters that have yet to arrive. This includes the Terminator T-800 model, Spawn, and Joker.

The trailer doesn’t reveal any of their fighting tactics, nor their fighting animations, or any of that good stuff. Instead, we just see each of the characters walk into the screen, starting with Shang Tsung, then Nightwolf, then Sindel, followed by Spawn, the Joker, and then the T-800 as played by Arnold Schwarzenegger.

Let’s start with the good.

Arnold looks fantastic as the T-800.

NetherRealm apparently were told not to pull any of that BS that they did with the females where they made them all look hideous and unattractive. I notice that with Cary-Hiroyuki Tagawa and Arnold Schwarzenegger they actually modeled them 1:1 to how they look in real life, making them look idealized and proper.

This shows that when they’re being forced by corporate not to make hideous looking thespians, they can use the photogrammetry correctly and actually make the characters look proper. 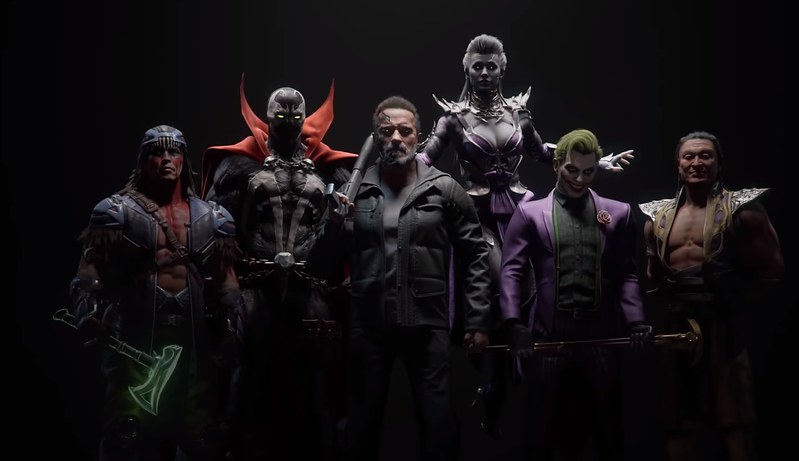 This means that in all those other cases they go out of their way to make the women look like nightmare-fuel and deformed freaks.

NetherRealm once again proved that when the boots are put to heel across their creative throats they can make top notch visuals, but oftentimes they deliberately choose not to. Spawn and T-800 are the absolute two standouts in all of the Mortal Kombat 11 cast, which is an embarrassment to the creative art director and the rest of the team for making such forgettable incarnations of such iconic characters.

However, even NetherRealm’s boner-reducing diorama of repulsive female fighters don’t compare to how out of place The Joker looks. YouTuber Nerdette’s Newsstand summed it up perfectly, pretty much summing him up as a dime store cosplayer from a low-rent comic book convention.

The Joker is probably the worst incarnation of the character to date, even worse than the ghetto gangster iteration played by Jared Leto, which at least had some element of menace to him.

What’s also pretty hilarious is that after the initial launch we haven’t heard anything about the sales of the game, almost as if there was a lot of fluff and pomposity but hardly any substance to the claims about how well the game sold. It’s also slipped to the eighth spot on the NPD’s top 20 chart for July, signifying that it’s losing its appeal faster than a PlayBoy bunny without regular plastic surgery touch-ups. That means that there is still hope that the game could end up on the Get Woke; Go Broke master list.

Anyway, Shang Tsung and Nightwolf are available right now. Arnlod as the T-800 won’t be available until October 8th, to coincide with the awful new Tim Miller movie, Terminator: Woke Feminist… oops, I mean Terminator: Dark Fate. Following the T-800, you’ll be able to acquire Sindel on November 26th, followed by Joker on January 28th, and Spawn in March.

(Thanks for the news tip Versed Gamer)