Paranoid Productions’ The Church In The Darkness recently dropped for the PS4, Xbox One, and on Steam for PC. The isometric stealth game is about surviving a cult out in the middle of nowhere. More specifically, escaping from the cult. For those of you looking for a little help on how to play the game and what to do to unlock nearly 20 endings, there are some walkthrough guides available.

So first and foremost, there’s a walkthrough uploaded by Praetorian HiJynx. It features an hour’s worth of play on the PS4 Pro, which you can check out below.

The theme of the game centers around attempting to infiltrate a cult, find your nephew, and escape.

At the start of the game you can choose to play with a previously made preacher or a random preacher.

You can also select from one of the two biological genders, male or female. You can then select your skin color and two items you can take with you into the game.

Praetorian starts with the medkit and the cult clothing.

The game starts by explaining that a Socialist cult led by Isaac and Rebecca Walker left Oakland, California and retreated to South America. You’ll infiltrate the camp in 1977 to find your nephew, Alex.

The game is fairly cognizant of today’s sociopolitics, referring to the cult as “Collective Justice Warriors”.

If you need help getting your bearings on the game’s narrative, the first thing you may want to do is check the starter notes by opening up the menu and reading the notes.

At the beginning of the game you’ll start in different areas.

Now if you’re wearing the cult clothes you won’t easily be spotted by the guards, but the townsfolk will mostly ignore you. 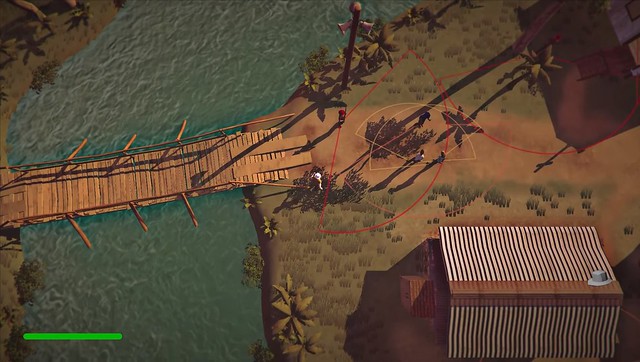 As you can see, the game has radial-style vision cones where enemies will have a specific view distance that you’ll need to avoid.

Yellow means they’re alerted but red means you’ll be attacked. If you don’t kill anyone but you die, they will treat you and take you prisoner. If you kill any of the cultist members and you die, then they just execute you.

Once the bodies hit the floor you can choose to pick them up and hide them, which includes stashing them in the bushes or hiding them chests, much like Hitman or Metal Gear Solid.

Now keep in mind that if you subdue an enemy without killing them, they will get back up. In order to keep them down longer you will need chloroform.

The downside to killing them is that the security will be on higher alert, and they will sound the alarm and make life harder on you compared to if you just knock them out.

You’ll find items sprinkled throughout the stage that you can acquire, but you start with very limited inventory space, so you have to pick and choose what you keep.

Food, however, will automatically be consumed if you pick it up during your travels.

Now if you get caught the enemies will be alerted to your position and chase you down. They will shoot at you, you will be killed pretty quickly.

The best way to lose them is to run away until they’re out of view. Also, you can hide in crates or chests inside houses. Once you’re out of sight, simply hide.

In the lower southeast section of the map along the river, you’ll meet a woman who will offer you suggestions on Alex’s whereabouts.

Now if you talk to the woman by the river and talk to Charles, it will narrow down Alex’s location to a specific point, as opposed to it being a giant blue bubble.

Just because you narrow down Alex’s position it doesn’t mean he’ll come with you, since you’ll need evidence of the cult being evil in order for him to join you.

You can oftentimes find incriminating evidence against Rebecca and Isaac at the Church or at the North and South Cottages.

Make your way up the path to Charles. 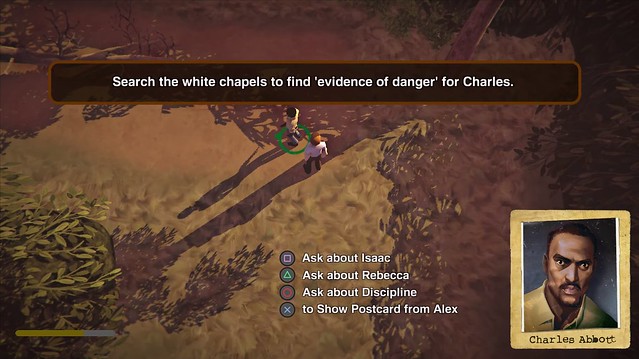 Ask Charles about Isaac and Rebecca, and then show him the postcard from Alex.

Charles will mark on your map a general location of where Alex is located.

You’ll also receive a general idea of where to find Theresa.

These locations may change each time you play.

Make your way to Theresa Parks, who is located on a makeshift playground, as depicted in the image below.

Take note that if you kill people Theresa won’t talk to you.

If you don’t kill people, you can ask Theresa about Alex’s location, and then make your way to the part of the map where she narrows down his location.

If you mess up and can no longer talk to Theresa, then Alex’s location will be a huge round circle on the map. 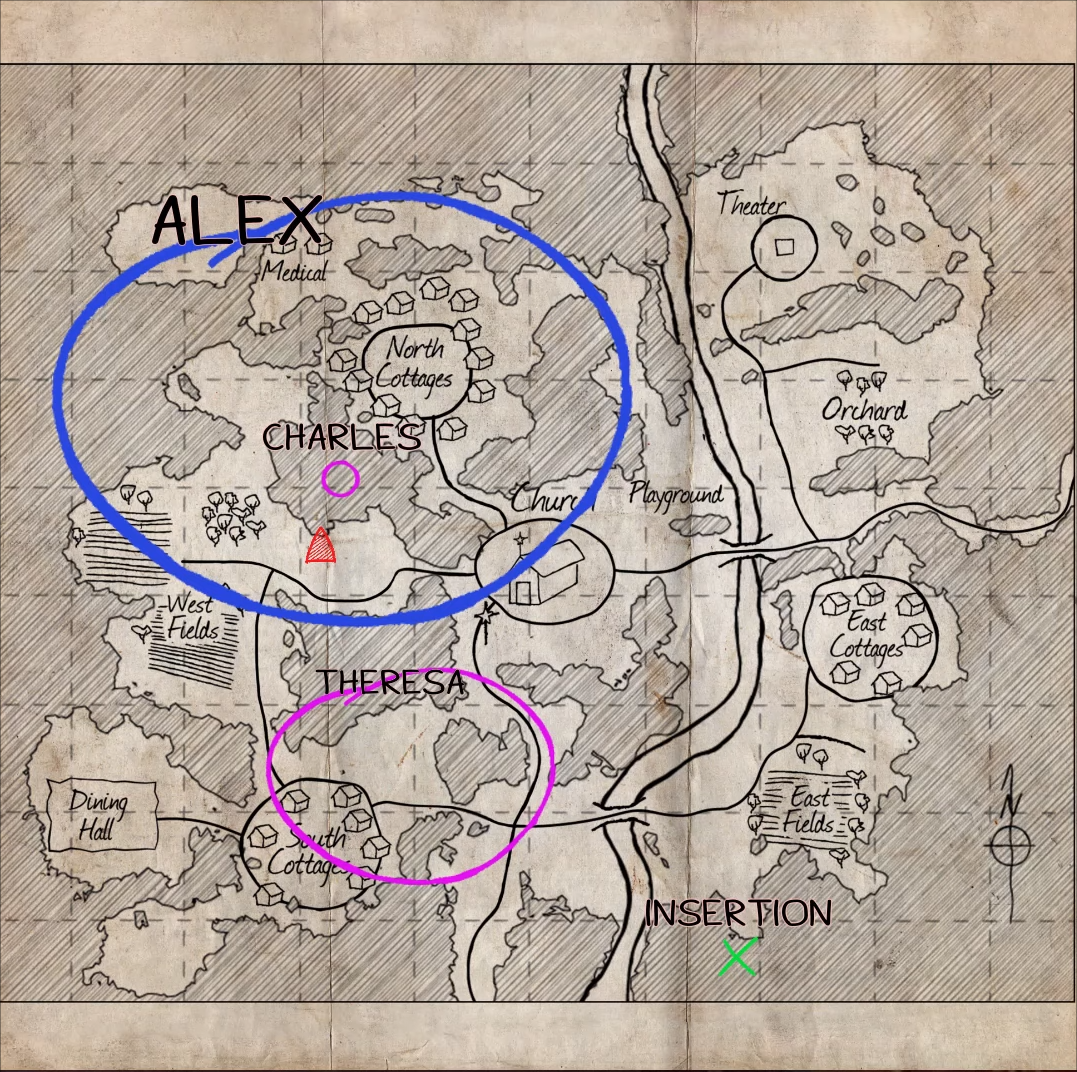 If you check some of the buildings for additional info on Isaac, Rebecca, or Alex. For instance, you can find some useful info from inside the church.

If you’ve killed people then your mission will only end in violence.

If you avoid killing people you can attempt to talk and convince people to help you out.

If the alarms give you trouble, use the metal shards to cut the alarm wires. Keep in mind that if there are guards nearby, they will be alerted to the alarms being disabled.

Rubhen925 has a full playthrough that unlocks the Last One Out ending.

Basically, once you talk to a couple of NPCs to find Alex’s location, and you visit the south/north cottages for evidence of wrongdoing by the cult, go to Alex’s location and show him the evidence and he will come with you to leave the cult.

If you can find chloroform you’ll need to use it to take out the guards around Alex. Remember, the more people you kill the less likely you’ll get help getting out.

From there you simply need to get to the extraction zone to unlock the ending.

The extraction point is the same as the insertion point. Simply get Alex to the exit and it will complete the game.