Back on July 23rd, 2019 YouTube terminated the Spanish account Dero Volk, which housed various regional national anthems and historical marching songs. The news about the termination was slow to reach the broader audience due to all the other censorship news spreading about, but Reddit user MaxReegans made a post about the channel being terminated to inform people about the censorship.

The original revelation of the termination was made back on July 23rd, 2019 via a Facebook post. Dero Volk informed his audience that the channel had been terminated by YouTube.

Dero Volk mentioned that he would be updating his audience about what he had planned next, and that he had kept backups of his videos, but so far the Facebook page hasn’t been updated with any new information. He did, however, begin to re-upload some of his content to a secondary channel called Dero Volk TV, but it’s light on songs and subscribers at the moment.

Over on the community tab of the Dero Volk TV channel, he explains that YouTube classified some of the anthems as “hate speech”, including those from Colombia…

This has to be a joke, right? It looks like that the national anthem of Colombia was REVIEWED by the Youtube Staff and the decided that it broke the community guidelines. This means that EVERY VIDEO of the Colombian anthem should be deleted from Youtube, right?! Could that be the reason of why the main channel got deleted?

If you attempt to visit his original YouTube page or view any of the videos, you’re met with the most unwelcoming of messages. 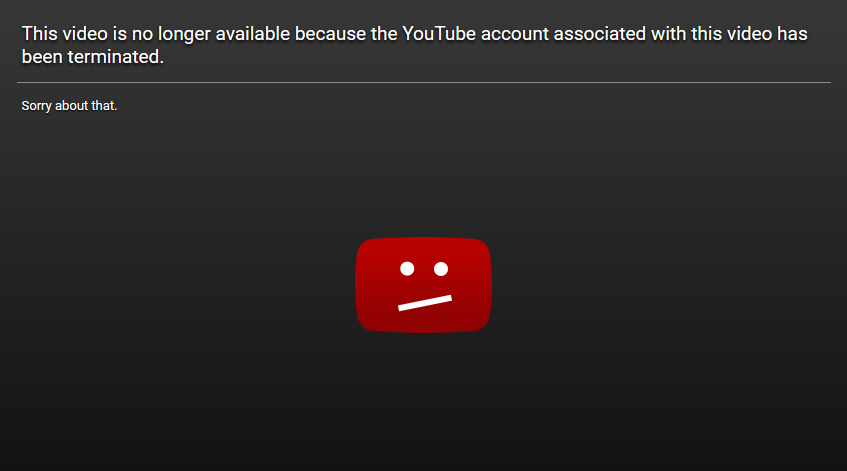 Much like Dr. Ludwig’s historical folk song channel, which was also recently terminated, Derovolk had a sizable audience that he catered his content to, reaching more than 129,000 subscribers and garnering more than 84 million views since starting the channel back in 2011, according to the SocialBlade Summary.

This isn’t the first time that YouTube has targeted Derovolk’s channel, though. If you check the Bitchute channel called Limited State – which re-uploads videos to Bitchute that have been hit with YouTube’s Limited State suppression, meaning that you can’t share the video or comment on it or embed it into websites – some of Derovolk’s videos have been getting hit with the Limited State flag since 2017, such as the the U.S.A., patriotic song “When Johnny Comes Marching Home”, which you can listen to below.

Basically, YouTube is not only wiping out and suppressing content that they thing is “borderline” enough to lead them to the “Alt-Right” and become “radicalized”, they’re also purposefully erasing historical content from their platform. Some of this content isn’t available anywhere else on the internet, so YouTube is effectively trying to rewrite history by removing the general public’s accessibility to said history.