A lot of people were curious as to why Disney’s Aladdin and Lion King were removed from Steam and GOG.com along with other digital distributors. The reasons for the delisting was never made publicly available, but now we know why: Disney is re-releasing both games in HD for home consoles and PC.

The re-release will support 1080p HD output on the Xbox One, PlayStation 4 and Nintendo Switch. There will also be other graphical enhancement options made available, but they didn’t really go into depth about that in the trailer.

The announcement came with a brand new trailer, featuring the two games and what sort of content that they will be featured in the HD re-release.

Both games will support resolutions up to 1080p, along with the new Watch Mode, where you can pick and choose which parts of the game you would like to play through. So if you don’t feel like playing from start to finish or you only feel like playing a specific level, you can. 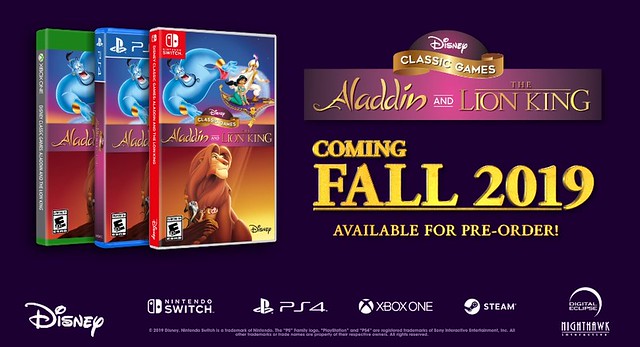 According to Gamespot, Nighthawk Interactive and Digital Eclipse are the ones working on the HD re-releases and they will be available for $29.99.

They don’t have a specific release date in store, but basically the rumors before that Disney had plans on making the games available again turned out to be true. Only, it wasn’t a streaming service but just a typical HD re-release.

The games were originally pulled from Steam and GOG back in July, and all we knew was that it was via publisher request. But the good part is that the games will be back this fall.

(Thanks for the news tip Guardian EvaUnit 02)