[Update:] Avi Yemini has been unbanned from Twitter… for now.

I’ve lost some followers in the process, so please RT this to let them know I’m back.

[Original article:] Political commentator Avi Yemini has been permanently suspended from Twitter for criticizing Greta Thunberg’s parents for allowing her to be used as a political pawn in the climate change debate at the United Nations. Twitter’s reason for the ban is that Yemini allegedly used the platform for “manipulation” and/or “spam”.

KotakuInAction 2 picked up the news from a video made by Yemini that clocks in at just under two minutes, where he discusses the ban and why it occurred.

As you know, typically big tech platforms use the all-encompassing “hate speech” as a label to get someone de-platformed, but this time they’re using the “manipulation” and “spam” excuse.

According to Twitter they claim Yemini was trying to sway political opinions using “manipulation”. You can view a screenshot of his tweet and the ban notice below. 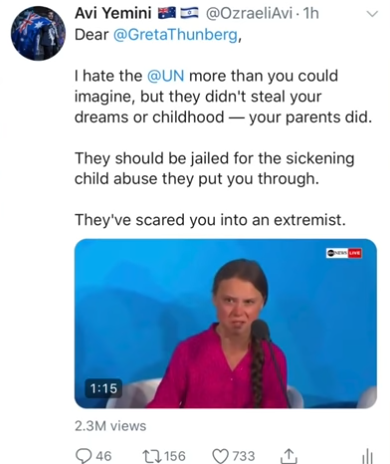 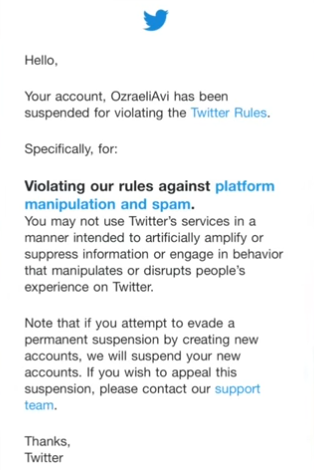 Yemini is hoping to get the #FreeAvi hashtag trending or to get people to actively convince Twitter to allow him back on the platform. He has appealed the permanent suspension but given the way Twitter operates, it’s a completely toss-up if they allow him back on. That’s not to mention that if they used such a nebulous reason to ban him in the first place, they’ll likely use a similar reason to ban in him the near future (assuming he’s allowed back on the platform).

As pointed out by Caldron Pool, this isn’t the first time that Yemini has crossed paths with big tech in a bad way. Earlier this year he was permanently banned from Facebook for exposing Comedy Central’s Jim Jefferies‘ hypocritical stance of promoting Islam and Muslim immigration into Western countries while also expressing his deep disdain for Muslims behind the scenes.

Comedy Central were incensed when Yemini released the hidden footage of Jefferies making fun of the Prophet Muhammad and joked about dingos eating Muslim babies. When Yemini posted the clips to Facebook, they permanently banned him for hate speech.

Basically, Yemini is getting the Milo Yiannopoulos treatment; where big tech are targeting him and censoring him from expressing opinions and truths that go against the current narrative being peddled by the Establishment. The censorship won’t end here, though. Anyone who speaks out against the powers that be will eventually be silenced, especially heading into the 2020 elections.