Reports have circulated that Call of Duty: Modern Warfare has been pulled from release in Russia for the PS4. There is no confirmation on what will become of the Xbox One or PC version of the game, but reports have surfaced that Sony is issuing refunds to those who pre-ordered the game in Russia for the PlayStation 4.

According to Ferra and Softzatak, Sony is issuing the refunds ahead of the October 25th, 2019 release date of Call of Duty: Modern Warfare on home consoles and PC.

An image was shared in the news articles from someone who received the notice from Sony stating that their pre-order had been refunded. 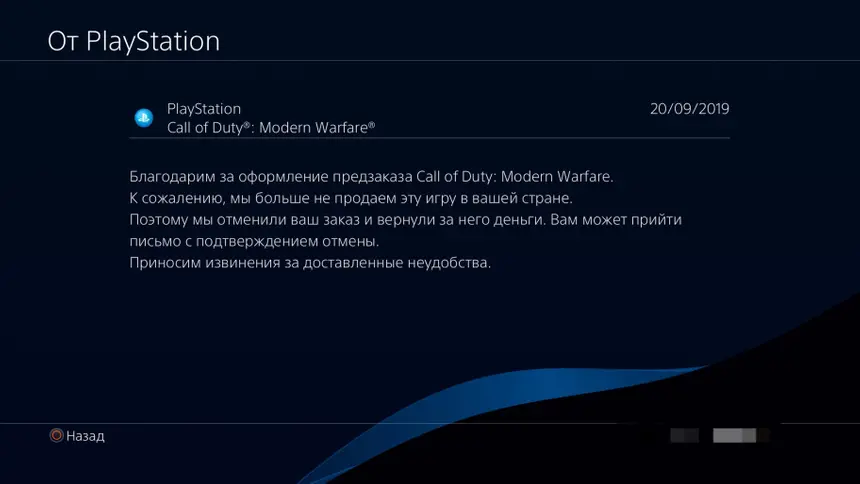 This doesn’t necessarily mean that Call of Duty: Modern Warfare is permanently banned in Russia or may not ever appear, but it does seem as if the game won’t be available at launch for whatever reason.

“Unfortunately, Sony Interactive Entertainment is not able to support the early access to Modern Warfare beta on PS4 in Russia. Additional information will be announced later. This will not affect our plans for testing beta on other platforms next weekend.”

It’s unclear why exactly the PS4 version of Call of Duty: Modern Warfare is being singled out but Activision did say they would announce more information later.

Some gamers are curious if the PC or Xbox One version of the game will be affected in Russia as well? If it were content in the game then surely all versions should be prohibited from sale… right? It could be a logistics issue related to the storefront, or it could be a technical issue related to Russian localization. We don’t actually know and Activision nor Sony have said.

The reboot of Call of Duty: Modern Warfare will be available everywhere for PC, PS4 (except for Russia), and Xbox One starting October 25th.