Bandai Namco held a presentation for Dragon Ball Z: Kakarot at this year’s Tokyo Game Show. They had an adjacent livestream with English narration to help give non-Japanese gamers an idea of what the new open-world fighting game will be like, and some of the playable characters that will be present during the gameplay.

This particular demonstration featured Vegeta with a special “Badman” costume.

They explain that the Western town featured in the video is one of the largest towns in the game’s world.

You can check out the full 13 minute demonstration courtesy of RajmanGaming HD.

They explain that there are side-missions and battles that can be started from all over the game world. The narrator hilariously says that since this was the time before Vegata found love, he was in his evil mode and decided to pick a fight with Tien, so they start a fight.

The fighting mechanics are quite similar to the Dragon Ball Xenoverse titles; you have your basic combos, your charge attacks, your specials, and the ability to fly around and fight in the area. 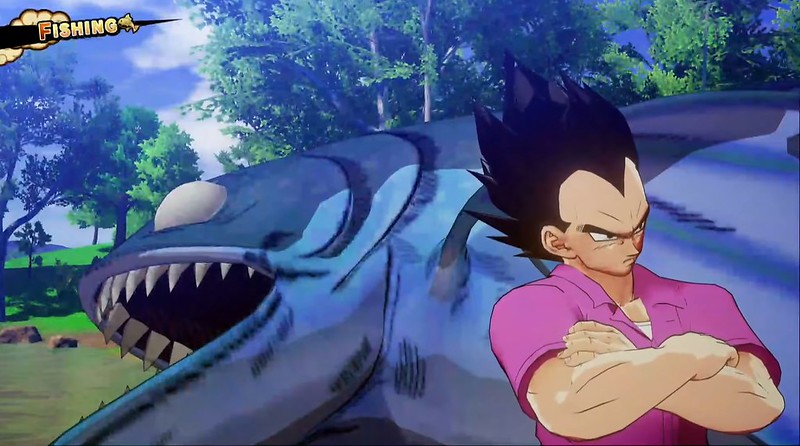 Later in the video Vegeta engages in a fishing mini-game, where he manages to reel in a massive fish that he abuses into submission with a flying dive kick.

You can use the fish and other ingredients to cook them at campfires or have Chi-Chi make you some meals.

Later in the video Vegeta attempts to recover an item but he’s waylaid by Frieza’s forces. This begins a three-on-one fight that’s a high-difficulty match. I have to admit that the game actually looked really good in the three-on-one fight, since one of the characters kept incessantly shooting fireballs, forcing Vegeta to have to rapidly dodge all the attacks while closing his distance.

While fighting one of the enemies the others continue to attack Vegeta from behind, forcing players to have to constantly stay on guard and use both offensive and defensive maneuvers. It’s rare that you actually have to be defensive in the open-world Dragon Ball games, but when fighting multiple opponents in Dragon Ball Z: Kakarot you actually have to fight smart and rely on sound tactics to defeat your enemies.

I doubt the game will do much more than what we see in the above video, but it looks like CyberConnect2 took a lot of the basic elements that made the Dragon Ball Xenoverse games what they were and then slapped a few extra features on top.

You can look for Dragon Ball Z: Kakarot to launch on the Xbox One, PS4, and on PC starting in 2020.