CI Games released a new gameplay video for Sniper Ghost Warrior: Contracts. The ten minute video features some raw gameplay footage from the Kolchak Harbor stage, with the CI Games community manager walking gamers through some of the features and content.

Unlike Sniper Ghost Warrior 3, you won’t be in an open-world environment, traveling around by vehicle and using fast travel in an attempt to zip past all the boring parts. Instead, CI Games focused on creating five distinct sandbox regions for players to explore, one of which includes Kolchak Harbor. These sandboxes are large enough to offer gamers a variety of missions, very similar to how IO Interactive constructs the Hitman games.

As mentioned in the video, each map contains five contracts each, so you’ll be able to dive back into the map to take out different targets under different conditions.

The video showcases how players can approach infiltrating compounds and installations, either using Rambo tactics or going the stealthy route.

The video focuses on the main target and we see how the player can quickly dispatch multiple foes silently.

You have multiple primary and secondary weapons. You have a sniper rifle, a primary rifle, a secondary rifle, and even throwing knives.

There’s a new bullet drop indicator on the reticule when sniping from long distances, along with the ability to tag enemies using the binoculars.

The enemy AI isn’t the best, and when one of the guys sees a bullet hit the wall behind him, he just stares at the wall instead of alerting the other guards or raising the alarm.

One of the highlights of the game, though, is that you can very conveniently navigate the environments using multiple routes to reach your objective.

In one scenario we see the decoy trap being deployed to distract two guards, which results in them getting taken out. 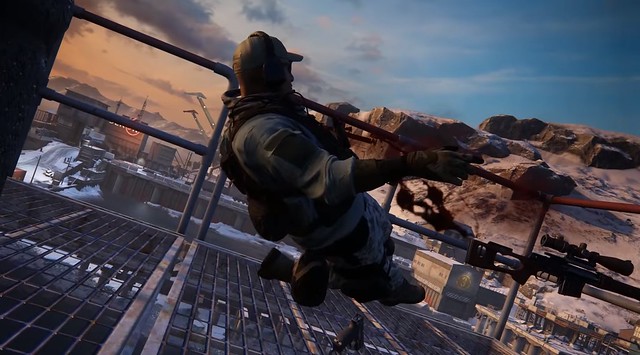 There’s an almost parkour-esque design to the levels where you can scale them vertically to take advantage of the large structures and areas featured in the game, allowing players to get creative with how they scale levels.

Once inside the building, close-quarter combat becomes necessary. We see a gas grenade employed to incapacitate two guards.

The gameplay looks solid but the AI is rather disappointing. They don’t really react to things happening around them, or just stand there as teammates or objects get shot up and damaged — like when the player shot the car door off the guards just stood around as if they daydreaming about Ryan Gosling in La La Land. Even still, the game looks like it could provide you with a modicum of fun if you’re into sniping games.

You can look for Sniper Ghost Warrior Contracts to launch on November 22nd, 2019 for the Xbox One, PS4 and on Steam for PC.