Following the El Paso shooting by Patrick Crusius, who was later discovered to be a far left anti-immigrant loon, 8chan faced the full brunt of another media campaign that would result in both their server hosting and DDoS protection being rescinded. Much has transpired since the site went down back in August, but now after a long wait the anonymous image board is returning under the new moniker, 8Kun, with some new technology powering the site.

What destroyed 8chan is debatable. What is known is the site became the simultaneous target of organized harassment by the media and the Democratic party. Each mass shooting or moral panic became somehow, in some way, caused by 8chan. Despite a complete lack of visibility, reach, or even notoriety mass shooters would begin posting their manifesto on the website.

The Christchurch post was undeniably deleted. This is proof from the database itself, since the public board logs are down. Anyone else with a screenshot of the board log that day will be able to corroborate this. pic.twitter.com/7HWUGPDTtc

The First being the Christ Church shooter who’s manifesto was taken down minutes after it went up. The second was the El Paso shooter whose manifesto spent 5 hours being ruthlessly mocked as poorly written fed posting, as its posting came hot off the heels of the revelations that the FBI was routinely conducting stings on the site with very little success. So little success that the tech illiterate FBI got caught fabricating  posts to demonize the website in official reports. 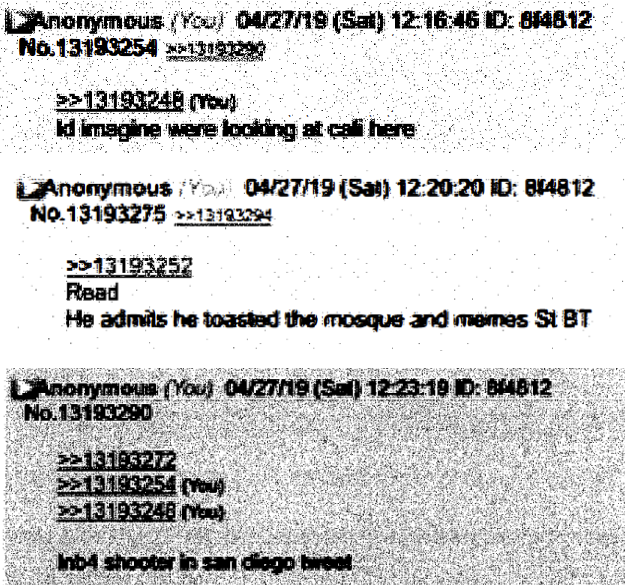 Regardless of how the manifesto was received, 8chan was blamed for another mass shooting carried out by a person who, for all intents and purposes, was not even an active member on any of the site’s boards.

Silicon Valley jumped at the opportunity to take down the website with CloudFlare  pulling both their DDOS protection and servers in violation of their own policies. Later after the site migrated to Bitmigrate, the service itself suffered the effects of Silicon Valley collusion when Voxility, who rented to the service most of their servers and DDoS protection, removed them from their network for hosting 8chan. Shortly after that, the site would come under coordinated DDoS attacks and was brought down until a solution could be found.

Silicon Valley does not appreciate the extent of imageboard power. Anyone who is semi decent with coding can recreate any service that is taken from the people that doesn’t involve a banking operation. It only takes a matter of time and effort, and in 8chan’s case the administration had both.

For the last few months “project odin” was underway in secret and now the site prepares to come back with heightened privacy protection that sites like Facebook continue to be fined for lacking, along with its own DDoS prevention service the developers can go on to license to other disenfranchised websites.

What at first was intended to be temporary downtime was extended as the Democrats called 8chan owner Jim Watkins into a closed committee to discuss the extremist content on 8chan. A move that would ultimately blow up in the Democrat’s face as Reuters reports that the meeting was resoundingly positive for the owner of the site.

“Watkins ‘provided vast and helpful information to the Committee about the structure, operation, and policies of 8Chan and his other companies. We look forward to his continued cooperation with the Committee as he indicated his desire to do so during today’s deposition,’ they said in a joint statement.”

In the eyes of the political establishment, 8chan just received massive amounts of legitimacy. Not just legitimacy, but the boogeyman, the so called “darkest reach of the internet” now has come into the light of day to reveal that horrifying monster that plagued society is about as horrifying as the movie Monsters Inc. No longer can the established media rely on people’s ignorance of what 8chan was to attribute every ill on this earth to them. Especially not after Jim Watkin’s pledged cooperation in accordance with US Law as 8chan always had done.

Watkins said in the statement released by his lawyer…

“If 8chan comes back online, it will be done when 8chan develops additional tools to counter illegal content under United States law,”

“If 8chan returns, staff would implement a way to restrict certain parts of the website during a state of emergency, in which case any board in question would be put in a read-only mode until it would be deemed safe enough to enable posting again,”

Now many will claim that the accusation that 8chan was the victim of a coordinated effort is an unsubstantiated conflation of evidence. Purely hyperbole and the opinion of the writer, but that position losses all credibility after several outlets tried to blame 8chan for other mass shooting while the site was down.

How could the Oslo shooter have posted on 8chan if 8chan has been offline for close to a week?
You’re actually fake news. https://t.co/GIzfk4MdUn

Another piece of fake news, this time by @nytimes, the “Newspaper of Record.”
By the way, no corrections were issued and the article is still up.
Again: how could the suspect’s post have “appeared on 8chan” if 8chan has been offline for close to a week? pic.twitter.com/X6rcC24c40

Rather coincidental that multiple sites had the same message that 8chan was to blame when the website was not only not up, but hadn’t for quite some time. It’s certainly not like the media coordinates to push an agreed upon message because only five companies with interconnected boards and executives control the majority of the media… right?

Many are clamoring for details of what will be new with the site, yet details are scarce at the moment. What is known is the site will be built upon new technology that will protect it against DDoS attacks. As the previous incarnation of the site increased efficiency in numerous technical aspects we can presume the newer site with over a hundred days of work will bolster numerous similar improvements.

As for the name change, it likely occurred for two reasons. The first is purely marketing. To step away from the prior negative association with the 8chan brand and the libel the media had leveraged upon it. Watkin’s did not choose the 8chan name, but inherited it when he acquired the site from its prior owner and administrator whom is currently not taking the transition very well.  This rebranding also coincides with the site’s role as the international 2channel board with “Kun” meaning “younger sibling” in this instance. 2chnanel being the original anonymous image board that 4chan was originally based off of.

While there is no set release date as of yet it appears the site is days or weeks away from its relaunch. Board owners are being invited back in to set things up ahead of schedule, so we are definitely in the home stretch. For those that rode the storm out patiently enduring the pain of Reddit or 4chan there won’t be much longer to wait.